A cocktail of Bharatanatyam, Kathak, Vedic chants and Norwegian black metal was recently served in Mumbai. It was odd, yet fun 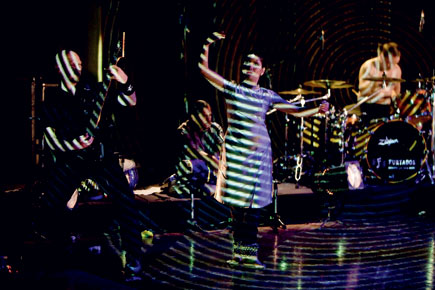 A cocktail of Bharatanatyam, Kathak, Vedic chants and Norwegian black metal was recently served in Mumbai. It was odd, yet fun


It’s a March evening. An incongruous assortment of musical instruments is lined up on stage at the National Centre of Performing Arts (NCPA), that hallowed epicentre of Mumbai’s cultural life. A tabla set and a mridangam lie on one side of the stage, beside a drum set. On the other side are spread out three electronic guitars and large sound boxes, typical of an open air rock concert. In the middle, a large round screen bounces back psychedelic green and red lights lasered onto it by a projector.

The instrument array doesn’t quite prepare you for the medley of artistes who will soon take the stage. There are two tabla and mridangam players (Vikash Mishra and Dinesh Kumar). There are two Kathak dancers (Anuj and Smriti Mishra), who perform the dance form’s signature spins, sometimes an amazing 100 times. There is a Bharatanatyam dancer named Rukmini Chatterjee, who also conceptualised the show. And, there is also, ahem, a Norwegian black metal band called Vreid, which in English means ‘wrath’.

The show is called Questionings. ‘Questions’ would have been less pretentious, but then this is the world of art. The aim of the performance, as the invitation card declares, is an exploration of Kalyug, the Age of Vice in Hindu mythology, and the different energies that surround us.

So for an hour, feet in Converse shoes compete with those bearing ghungroos, Kathak steps take cues from guitar riffs, and recorded Upanishad chants (by All India Radio announcer Birendra Krishna Bhadra) clash with shrieking black metal vocals, sometimes resulting in an impressive, soaring sound and sometimes in comic hilarity. Throughout the performance, Chatterjee meanders through the stage, looking into every performer’s face, almost as though she is exploring the corners of Kalyug. And then she rolls her eyes and exposes her whites, looking less a Bharatanatyam dancer, and more Ozzy Osbourne. One of the strangest elements in the show is the appearance of two large white orbs brought onstage by the Kathak dancers. A tantrik’s face is projected on one and a child’s on another. Tantrik and child both hold lengthy monologues on the destruction of the environment and Kalyug.

When we meet the artistes on the morning of the performance, all this is far away. The world is still sane. We learn that preparations with the entire set of performers began only a week before the first show (in Delhi on 25 March). Many parts of the show were tweaked at the last minute. According to an earlier plan, a recording of Hitler’s speech was to be played along with Upanishad chants, to show how in Kalyug energies are used for different ends. But the idea was dropped when it “jarred” with the rest of the show.

Apart from a wisp of grey at the front of her hair, there is nothing to indicate that Chatterjee is 41 years old. She speaks unhesitatingly and softly, telling us how she owes much to her teacher, the well-known dancer Mrinalini Sarabhai, and how she has been living in Paris for the past 22 years. She calls her show “a meeting of different cultures”, a theme that has involved her for many years now. In previous shows, she has choreographed and performed Bharatanatyam with martial art forms like Kalaripayattu, and with Western dances like ballet and flamenco. According to her, as a Bengali brought up in Gujarat and now living in France, she has always been a “foreigner” wherever she goes, and this experience permeates her art.

She admits that Questionings is perhaps her most ambitious performance yet, one she worked on for two years. The idea struck her five years ago, when she watched a black metal performance in Bilbao, Spain. She found the performance akin to a tantrik ritual, and was so impressed with it, she knew she had to collaborate.

“Black metal is the perfect art form to highlight the Kalyug,” she says. “Its artistes are the greatest urban poets of our age. They describe our world and man’s place in it with true understanding.”

Norwegian black metal has controversial, dark aspects. Musicians of this genre have participated in murders, church burnings and Satan worship. On finding the body of a fellow band member who had committed suicide, Øystein ‘Euronymous’ Aarseth of the band Mayhem, an influential figure on the black metal scene of the 1990s, is rumoured to have prepared a stew of… never mind. Vreid’s members, by comparison, are doves. Jarle Kvåle, the band’s 34-year-old bass guitarist, who goes by the name of Hvall, works as a booking agent; Stian Bakketeig or Strom (guitarist), 34, owns a hardware store; and the other two, Jørn Holen or Steingrim (drummer), 34, and Sture Dingsøyr or just Sture (vocalist and guitarist), 37, are bureaucrats working with the government. They call their music ‘Black and Roll,’ because they seek inspiration from a variety of genres like rock and roll and pop. The closest they have come to traditional black metal bands is wearing ‘corpsepaint’ (make-up used by black metal artists to look like corpses) during a show, a practice they have now discarded because they believe it is pretentious.

When they take the stage, they make for an eclectic-looking band. Hvall, who is about six feet five inches, hulks over almost everyone else on stage. He is heavily tattooed on both arms and spikes his hair. Sture’s face is never visible on stage, as he wears his poker-straight hair long (almost to the hips); Strom on the other hand is bald, and Steingrim performs without his top on.

The group has been for the past few years looking to expand the horizons of black metal music. Their third music album (I Krig, or In War), for instance, far from mouthing Satanic lines, is based on poems written during World War II. They decided to collaborate with Chatterjee because she offered something new.

Says Hvall, “At that time [the 90s], many black metal musicians believed in Satan and led a questionable life. Some do even now. But they are mostly imitators trying to find some popularity. We have always focused on our music, nothing else. Questionings itself is an attempt to push our horizons and create something different.” Sture, his hair in a neat ponytail now, adds, “We hope different musicians and artistes come together [like we did] and so do fans of different art forms.”

Different fans did come, and what a sight they made! As the performance unfolded on stage, another took place in front of it. The audience included wizened old men and women, along with middle-aged connoisseurs of classical Indian dance, who sat on chairs, said ‘wah, wah’ and clapped. It also included youngsters with long hair and beards, standing—often on chairs—in T-shirts that read ‘Who Needs God When We Have Satan’, and bounced their heads in the air (or head banged) in appreciation. Who could have doubted we were in the midst of Kalyug?