Gems in the Junkyard

Pavan KJ photographs the broken parts that cars leave behind in junkyards. But why does the scrap speak more than the painted metal? 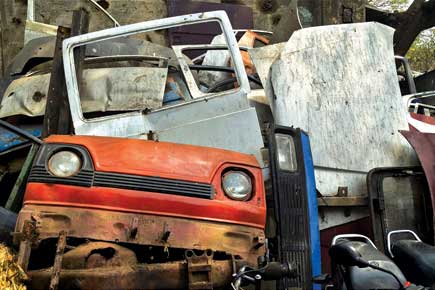 
Gallery Sumukha is a yawning space behind Parijma Medical Centre in south Bangalore. At first look, it’s the oddest location for an art house. Right near the gallery are men, women and children in a votive huddle. Cowled forms of flesh and bone stand or sit frowning; forming body angles bent by fear of medical reports and prognoses. Just ahead of them, is a door that slips open a distinct vista. There, lies Gallery Sumukha, juxtaposed with the hospital. One is a place with people with iron in their flesh. The other is displaying work with iron in the soul. Art and suffering made for each other.

I enter the gallery. Sumukha is exhibiting the works of one unknown 29-year-old photographer called Pavan KJ from Mysore. I tilt my head at one photo, and an avalanche of metal howls at me. It’s a picture of ramshackle automobile parts cast away like orphans in a junkyard. These are objects screaming out for recognition; demanding attention for their contribution to different lives.

Absorbing their peeled and rusted isolation, I glance away to catch another image. This one is of a car that is now scrap. There are only two seats watching me, and they have the contours of penguins. One rexine-covered seat tilts to the other, like a woman about to keep her head on her man’s shoulder. It’s called Conversation and opens a window in the emotional junkyard of my mind. I picture two people sharing immensely intimate moments on such long rides in it, that the seats now reflect their body language. Literally, the objects in the photo behave like the subjects that once nestled in them.

In another slide, a red Maruti van blinks. Its top portion is history, only the headlights at the front remain. The front lights of the car blink, like the eyes of a dog imploring a master. I imagine how many rides two people—perhaps it was a family—have taken in that car. Their absence has been caught in that seat. An object once part of one’s life, now bears a human being’s stamp on it forever. These photographs are stories in steel.

But these are not happy shots. If cars and automobiles are a metaphor for middle-class Indian ambitions, these images rip out the ramparts of our wants. They are the still life images of the alloys that shape the aspirations of middling India’s ever-elusive dreams. I wonder what kind of a man (an outcast?), could have found human conflict—and solace—in a scrap heap. He seems a fellow completely dislocated from the everyday world of EMIs and car loans, only to find meaning behind understanding the ferrous substances that make them. I turn around and confront a bespectacled Pavan K J. We bound up the stairs and enter a room overlooking, well, a small parking area. Our eyes constantly sway there.

“I would go to the gujari (junkyard) in Mysore every weekend for two years to shoot these photos,” he says. Why?

“Because those objects speak to each other. There is a language between them that most people don’t identify. And I enjoy my presence in that place,” he explains, haltingly, looking to see how I react. I wear my weary look.

The two years that he took to shoot the pictures—of his own accord—while performing as a percussionist for rock band Swarathma, wasn’t without drama. “The owner of the junkyard asked me to get a certificate from the Mysore Police Commissioner. He admitted that some of the stuff in the junkyard was illegally sourced and could land him in trouble. ‘What if some man identifies his old car in your photos?’ he asked me… the junkyard people would say ‘paagal aadmi aa gaya’, whenever I would go down there to shoot. ”

But there are other questions that pinch me. Growing up in an environment where pursuing the arts is considered a certificate of one’s uselessness, how did this chap become a professional artist? “How did a south Indian boy like you became a photographer?” I ask. He laughs.

“There was serious pressure from home to become an MBA, doctor or engineer. Right from class X, I knew I wanted to become an artist, but I chose to do science in pre-university and even prepared for engineering exams. That’s when I realised this was just not for me,” he says.

Luckily, his elder brother was already a professional artist, and Pavan entered the prestigious Chamarajendra Academy of Visual Arts (CAVA) in Mysore for a Diploma in Multimedia. Stints in advertising as a photographer followed, and music happened with Swarathma.

“Is your show a celebration of the junkyard, or is it a reflection of your alienation?” I mouth the question that I’ve been longing to ask since I saw the first image. “Are you an outsider? Do you find yourself completely dislocated with the senselessness of the everyday?” I rant, sensing some bonhomie with a fellow alien.

Pavan’s speech falters a bit. “I increasingly think so. I’ve lost respect for the material world. This world of money and matter does not make any sense to me. I cannot lead the life that others lead,” he admits.

We give each other a knowing look after a pause. He leads me below to the gallery. I pick one of my favourites among his photos: an old Muslim gentleman nodding off in the scrap heap. I learn from Pavan that the man comes there every day. The junkyard has become such a home and haven that he even prays there. My eyes semi-circle to take in a million emotions, scattered in metals. I am at home among the gems in the junkyard.