Cartoonist Nirmish Thaker is tracing the history of cinema through caricatures, and you can be pretty sure he’ll give you enough to chortle about. 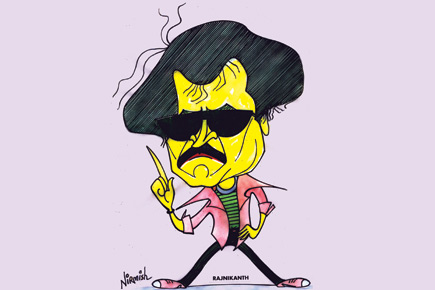 Nirmish Thaker is tracing the history of cinema through caricatures. Expect enough to chortle about.


Nirmish Thaker may be an employee of ONGC in Surat, Gujarat, but he has sketched his way into print as a cartoonist over the last decade and more. His work has appeared in so many Indian publications that listing them is pointless. Nirmishchief is his recent exhibition of caricatures, on display at the Institute of Indian Cartoonists in Bangalore. He’s also planning a series of caricatures on the history of cinema. Excerpts from an interview:

Q What is your Indian cinema project all about?

A It’s a history of cinema through caricatures. Initially, I’d thought it would be about Indian cinema alone, from the time we had our first movies, but it will go back earlier than that. It will basically consist of caricatures of some of the pioneering individuals who have helped develop cinema as an art form.

Q Could you be more specific?

A I’ll have caricatures from the time of the Lumiere Brothers to Charlie Chaplin to the first bioscope movies in India. Then later, Dadasaheb Phalke and Hindi cinema as we have known it through its golden years in the 1950s, 1960s and 1970s to what it is today. This will be done in chronological order.

Q How many caricatures have you done, how many will you show?

Q What’s the purpose of a cartoon for you?

A It must be funny. It must satirise an absurd aspect of a person. At best, it must sort of subvert how people understand a person. But the trick lies in finding an aspect, a body cue, a mannerism in a person that is unique.

Q When did you starting doing cartoons?

A When I was 15 or 16. I used to draw from my school days. I have learned it without any guidance, like going to an art school.

Q What’s your ‘funda’ about cartoons?

A I don’t go by the crowd. Whatever is in demand and popular, I don’t imitate. So I don’t do political cartoons. I may draw politicians and public figures, but it won’t be political. I hate politicians.

Q Who is your favourite cartoonist?

A David Low. He was so good at capturing the mood of World War II that Hitler had his cartoons banned. His Colonel Blimp is one of the great works of the last century. It’s the greatest example of how a cartoonist can communicate.

A Yes. But I like RK Laxman’s sarcastic humour more than his drawing. I don’t think much of his drawing. With Mario Mirando, it’s the opposite. I like his drawing more than the humour. The 1960s publication Shankar’s Weekly had the best cartoons, a lot by writer OV Vijayan. Those are the ones I’ve been inspired by.

The colours and contours of cautionary tales