Dancing in water is about letting go of the human urge to control, says choreographer Chris Lechner 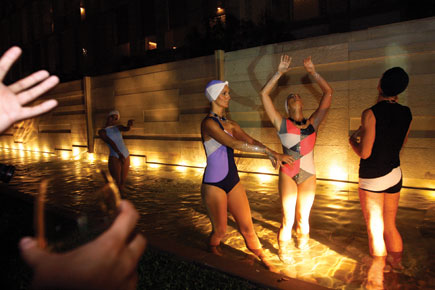 Dancing in water is about letting go of the human urge to control, says choreographer Chris Lechner


Watching Chris Lechner perform is like watching a dream unfold. Scenes change with a fluidity that is almost unreal, movements literally melt into one another. It is almost as if by performing in water, the dancers have imbibed its soft, soothing feel. “We have used water as a transparent, reflective medium. A pure light is projected on to it to hit bodies studded with Swarovski crystals,” says Lechner, who recently performed in Delhi for the launch of an arts organisation called the Creative Services Support Group (CSSG).

Choreography of this nature defies the conventions of a dance performance. There is none of the high energy associated with a piece performed on stage. “We are the stuff dreams are made of. A human body is 70 per cent water, but we look so solid. But if you subject yourself to water for long, you will notice a change. Water changes a quality within us,” says Lechner, who used to be a solo performer with the Hamburg and Stuttgart ballets before embarking on a gamut of new projects like physical awareness training, theatre, modern dance techniques, yoga, martial arts and deep tissue-structural work.

He is of the firm belief that our fluid nature can’t be ignored. We carry an ocean within us, but we haven’t found a way of expressing this yet. Lechner has spent a lot of time researching the power of water as a performance medium and its effects on the human body. He now combines his creative instinct with scientific knowledge to create powerful imagery in water. “When you are in a bigger body of water—say, a lake or river—there is no ground under your feet. Everything that you fight on land, including gravity, is missing in there. That presents you with a range of possibilities that you can only dream of. People who are incredibly clumsy on land simply transform in water,” he elaborates.

With the density of water being 800 times greater than that of air, performers are literally carried with the flow. The choreography then becomes more about letting go than holding on. The idea is not to create balletic shapes, but rather, to let the body revel in its true element. “The only other dance form that truly espouses this philosophy is the Japanese butoh. It, too, allows the elements and seasons to guide the body,” says Lechner.

Not everyone can find their dancing feet in water and that’s why Lechner had to bring together a highly specialised set of performers. “We are five dancers in all. Two are butoh performers; there is another talented dancer who has done some aerial work and hence possesses the extreme control that comes from hanging [in air].

Then there is my wife and I, who have had some previous ballet experience,” he says.

For someone who has dabbled in many forms of performing arts, he wasn’t always sure if this was his calling. “I just knew I wanted to be in a creative space,” he grins. Lechner turned to ballet since, at the time, it seemed to complement his taekwondo workout. “Ballet was being used very effectively with male bodies,” he says.

However, slowly, something in him started changing. Lechner no longer wanted to be confined by the traditional conventions of ballet. “Some questions started nagging me. So, 15 years ago, I sold my car and went to London. I knew of people there who’d started out as ballet dancers and were now working on a combination of improvisation and physical arts. And I was hooked; this is where I wanted to be,” he says.

As he went through this metamorphosis, he also discovered his love for India. Ever since he was first invited to the country by Attakkalari in 2000, he has worked in India every year.

Whenever he is not chasing new ideas or coming up with newer choreographies, he retires to his charming little cottage in Uttaranchal with his wife. “I have spent five monsoons in India and something within me has found peace here,” he says.