Echo of a Battle Cry

Eve Ensler’s new play Emotional Creature calls on women to reclaim their emotions, but lacks the power of her classic Vagina Monologues 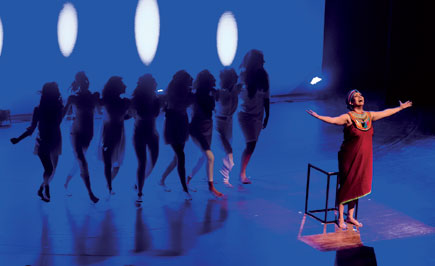 Eve Ensler’s new play Emotional Creature calls on women to reclaim their emotions, but lacks the power of her classic Vagina Monologues

Chang Yin, a young girl from a small town in China, works in a sweatshop where she is responsible for the “very important task” of attaching Barbie’s head to her body. As she sits on a lone stool centre stage, taking us through her story, she ponders the fact that there are over one million Barbie dolls across the world. “Imagine if we freed them,” she says. “Imagine if they came alive in all the villages and cities and bedrooms and landfills and dream houses. Imagine if they went from makeover to takeover. Imagine if they started saying what they really felt. Let Barbie speak! Free Barbie!”

Being staged for its first paying audience on International Women’s Day at Mumbai’s Prithvi Theatre, Emotional Creature is feminist activist and author Eve Ensler’s new play, brought to India by Poor Box Productions, the folks responsible for keeping The Vagina Monologues alive and kicking for over a decade. In keeping with the form Ensler is most accustomed to—and known for—the play comprises a series of semi-fictional monologues tracing the not-all-too- different lives of girls across the globe. ‘Free Barbie’ is perhaps the finest of these, using the image of a million ‘chained’ Barbies coming ‘alive’ as a call to young women to free themselves: to speak. As far as the play’s other noteworthy monologues go, sadly, they are few and far between.

From the Democratic Republic of Congo, a part of the world in which Ensler has worked extensively, comes ‘A Teenage Girl’s Guide to Surviving Sexual Slavery’, the story of a girl who “went on vacation for two days [and] came home after two years”, told in ‘rules’ (“Rule 2: Never look at him when he is raping you” through to “Rule 8: No one can take anything from you if you do not give it to him”). From Iran, we meet a girl whose large nose was put under a cosmetic surgeon’s knife, thanks to well-meaning parents “helping” her be “pretty”. Or there is the girl who maintains a hunger blog, starving herself day in and day out, very literally shrinking out of this world.

In theory, the premise of these stories is acutely relevant: they seek to remind women of shared struggles, deeply felt emotions and intrinsically connected lives. The experience of watching Emotional Creature, however, falls short of any real praxis. The most starkly jarring aspect of the production is the unnatural distance between the words spoken and the realities they seek to signify. When a group of girls huddle together on stage, speculating about doing ‘it’—“It can kill you”, “It can free you”, “Guys don’t know what they’re doing”—the audience doesn’t experience a genuine representation of giggly, gossipy, tentatively curious schoolgirls. Rather, we see actors playing their parts, dutifully delivering their lines. As the play progresses, from schoolgirls to sisters to daughters, we continue to see and hear performers rather than the women they try bringing to life.

Poor Box Productions’ rendition of Emotional Creature does, to its credit, make very real and useful attempts to contextualise the play for Indian audiences. We have no dearth of stories of violence against girls, and this play reminds us of several of the most brutal—or rather, most reported—incidents of the past few years. From the now-infamous gangrape of a physiotherapy student in Delhi in December 2012, to the less known rapes of young girl children, Emotional Creature forges a common ground, a common voice, between stories of violence across the world.

Sadly though, not all attempts to make the script regionally relevant are as successful. In an attempt to incorporate ‘dancing for justice’—a central aspect of One Billion Rising, Ensler’s global campaign to end violence against women—actors break into a choreographed Bollywood dance routine. Poorly coordinated and excessively lengthy, audiences must sit through it in uncomfortable reminiscence of the wedding season just gone by.

Visually, the performance is perplexing. Each scene or monologue is supplemented by a large projection across most of the set. Comprising a child- like image and the title of each monologue, these slides, apart from bearing the appearance of a rather hurriedly put together PowerPoint presentation, do a disservice to the audience’s experience of the play. By announcing the scene’s central message before it begins, the play deprives the audience of intrigue and surprise, even robbing itself in some cases of basic interest.

As far as both the script and direction of Emotional Creature are concerned, its primary failing lies in its inability to sustain a world of its own; in its refusal to allow audiences to forget the medium and fully experience the message. Our disbelief remains unsuspended, intact.

Eve Ensler’s work has always had me in its thrall. In its richness of voice, its searing poignancy of language, her writing and her art have often crept into my own engagements with feminism and my various forays into writing. I so clearly remember my first ever experience of seeing The Vagina Monologues, a 17 year old in the back row of a school production, trying to look blasé but pulled hook line and sinker into the world of first-times before me. The first time an orgasm wasn’t confined to plastic porn; the first time the word ‘cunt’ was not a boy’s locker-room insult; the first time I said the word—whispered, tentative—vagina. Over the years, I have seen the play performed several times, with different sets of people, including an entirely Marathi-speaking audience for a translated version. Each experience has been wrought with something new, something bold and altering. Watching Emotional Creature, I badly wanted to like it; I wanted it to be as perfect as her original Monologues.

The foundation on which Emotional Creature was created is both compelling and necessary. In the introduction to her book of the same name— on which the play is almost entirely based—Ensler speaks to all the girls and young women she hopes will hear themselves within its pages: ‘This book is a call to listen to the voice inside you that might want something different, that hears, that knows, the way only you can hear and know. It’s a call to your original girl self, to your emotional creature self, to move at your speed, to walk with your step, to wear your colour. It is an invitation to heed your instinct to resist war, or draw snakes, or speak to the stars.’

This call is brave and important in a world that demonises women for feeling too much, laughing too loud, sounding hysterical. That the word ‘hysteria’ comes from the Latin hystericus, ‘of the womb’, is telling of a way of thinking that reduces women to their organs; that sees their reproductive systems and bodies as inherently something to be controlled and contained. Disgust monitors the disgusting.

Emotional Creature is a valiant attempt— a war cry, if you will—to call on girls to reclaim their emotions; to stare down the insults of ‘cry-baby’, ‘neurotic’ and ‘intense’; to reclaim their voices and speak in their own tongues. Throughout literature and history, women’s voices have been deemed ‘too irrational’ to be taken seriously, too emotional. In her book, Ensler speaks to this silencing; she calls for a refusal.

This message has not fared as well in its translation to theatre as a performance art. Rather than reinforcing these battle cries of reclamation, the script infantilises the girls it represents, reducing them to cardboard cut- outs, to text on a page. Their lives are flattened, made unidimensional by the language that seeks to give them expression. They cannot escape the highly Westernised script; they do not speak on their own terms.

I miss the unashamed orgasms of The Vagina Monologues, which even though obviously faked, felt real. Emotional Creature and its women skim the surface of a powerful and empowering message. The constraints of their medium, however, render their journeys merely skin deep.