In the recent movies of this hero who refuses to retire, anything can happen to him, and to you, the viewer. So beware 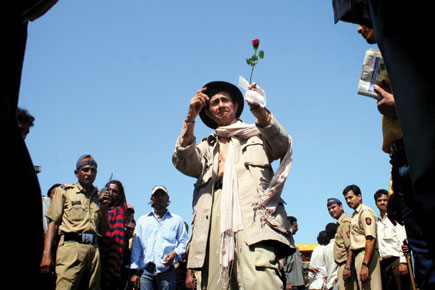 In the recent movies of this hero who refuses to retire, anything can happen to him, and to you, the viewer. So beware


According to the summary on the VCD cover, Censor is ‘a multi starrer that takes a satirical look at the double standards that apply when censoring a film. An international award winning film is stuck at the censor board, with the producer battling hard to get it released. The international award compels the judge handling the case to comment that the country needs to review its censor policy’. Whoever wrote this is a genius. It makes Censor sound like a story with a hint of promise. The satirical look bit implies further edge. The more aware among you will say “bullshit”, given that this is a latter-day Dev Anand movie and the cover has him hugging his hapless young find, Heenee Kaushik.

Kaushik has her hands full as an actress in this award-winning film. A class she teaches contains women from all over India. She asks them who their role models are. This harmless question ends with two students flinging off their tops, ripping their skirts, and dancing on their tables, while Amrish Puri and Jackie Shroff, two religious scholars representing Islam and Hinduism, gleefully take in the sight. The scene ends with Kaushik saying to herself, “At least I now know what modern girls think like.” Within minutes we find her wrapped in a towel in a bubble bath. Her lover gifts her flowers and plastic bangles as she bathes.

Love at Times Square, which takes its name very seriously, stars Kaushik as a documentary filmmaker who wanders around New York with a camcorder—ostensibly on assignment for a channel in India. The editor of this channel, Rishi Kapoor, professes love for her over a trunk call, and then tells her she can take all the time she wants to submit a documentary. The movie tracks her encounters with two young men over a year, culminating in an epic sequence where terrorists who attempt to murder a bunch of visiting Bollywood stars botch it up, and, on their way out, on seeing Kaushik’s legs, decide to rape her. And then, it gets even more epic. Kaushik can’t make up her mind about the two guys. So what does she do? She invites them to Times Square, where they met a year ago, and says she’ll choose one man to stay with her forever. She ends up picking a mate, and calls up the reject to inform him of her decision. But here’s the thing. He’s the real winner here. Because Kaushik is an incredibly bad choice. (Her natural fruitiness springs from her movie father, Dev Anand, who wrote, produced and directed this Bollywood standard-lowering enterprise.) She responds to proposals with the sanctimony of a virginal 14-year-old who spends her evenings listening to bhajans. She has no emotional response to speak of. After a huge, almost movie-defining, moment, the look on her face suggests: “Oh crap, wasn’t it Atul’s birthday yesterday?”

Dev Anand, who keeps bringing out such stuff (it actually is a lot less than it seems like), has been kindly described as ‘evergreen’. This is accurate to some extent because his mannerisms—the way he calls out his daughter’s name after the murder plot goes awry, the way a loose swing of a hand ends in a controlled flourish—are things you’ve seen before. If Jeetendra wore white shoes in movies today, he’d be called evergreen too. So this is a shallow interpretation.

The other interpretation of his actions, also shallow, is that he has conclusively lost it. There’s a goodness about him in these messes, but it comes through primarily because of the dross he surrounds himself with: no-name, no-hope actors who show up half asleep in what may have been conceived as exciting scenes. It’s also because he plays the role of some kind of patriarch, although both Love at Times Square and Censor contain intriguing angles that suggest he may have been some kind of dirty old man, and a director who cheated on his wife.

Anand may have been a much-loved actor once, and women may or may not have done all kinds of things to get his attention. But now, as he dodders around in movies that he clearly believes in (and who would force him to make a movie he doesn’t want to?), but which clearly have no defined utility, he breaks further and further away from his own past. The gestures are evergreen; nothing else is recognisable.

How did this happen? At a time, Anand appeared in four or five films a year for several years. As the 70s turned into the 80s, films came by less frequently, and then, with liberalisation, the film business shrugged off Anand and what he represented. Anand grew more interested in the shape the country took, even if what came of the exercise was an incoherent mess. In Censor, he explores how board members can use the threat of an ‘A’ certificate to have their way. The movie also takes a look at the conflict within families as old customs make room for new ones (lest you be tempted to watch these movies, please don’t).

Anand is partly victim, partly a man who knows he can change the course of his destiny. In Anand’s world, anything can happen to him. The corollary is, therefore, anything can happen to anyone, including you, the viewer. You may have been following one story so far, but wait, what’s this coming at you from the corner of your eye? Why, it’s another plot, knocking the earlier one right out of the frame.

Anand tries to understand—and struggles with—the identity India’s young are carving out for themselves. In giving his characters ambition that is clearly meant to be representative, he makes them parodies, as if someone had asked a bunch of old folks what they would want to be if they were younger: “We will fly in the winds of this new era”, “I will be a pilot”, “I will be a police officer”, “I will be an astronaut”, “A singer”. Because he can’t get it right, Anand and his movies smell old. He becomes a punchline for doing this. And then you wonder: why? Does he not see what he does objectively? Has he been afflicted by every creative person’s worst fear—losing the ability to differentiate between good and bad? Has no one told him?

This doesn’t feel like the end of Anand, but it does feel like a betrayal of some kind. And not by him, but by the parts of life that give and take away. Every person knows someone who stayed on too long, when the music stopped, when every other guest has gone. Anand is like that. Except he has refused to leave for decades. He subjects the few who watch his movies with lines such as, “Naam shaan hai aur aadmi bhi shandaar hai,” and “Tum jaisi sundar ladki documentary nahi banayegi toh channel bandh nahin hoga?”

This will not come as a surprise, but Anand’s recent movies cannot be found at popular stores. I managed to acquire a few of his films through a network of legit DVD suppliers. On delivery, the DVD guy said, “That’s going to be a hundred bucks.” That was it? “Yeah,” he laughed. “This is the worst delivery I’ve ever made,” he said, not referring to the money.