Jehangir Sabavala will be remembered for bringing Cubism to Indian art 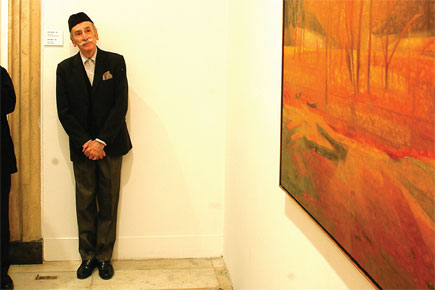 Jehangir Sabavala will be remembered for bringing Cubism to Indian art


He stood silently in a corner of the huge hall at the National Gallery of Modern Art, New Delhi, delighted with the paintings that surrounded him. In a crisp shirt with a matching cravat and perfectly polished shoes, he seemed to come from another world, another time. Jehangir Sabavala (1922-2011) was the most unusual picture of an artist from India. And he hardly behaved like the man of the evening. When told how wonderful it was to have so many of his works, including many large panels, under a single roof, he was quick to add, “I only painted them. The real effort has been by the gallery and by my collectors, who were generous enough to send these from all over the country. I myself am seeing so many of these works after years.”

This was in 2005, when the NGMA hosted a huge retrospective show of the artist. At that time, the art market was at the cusp of record-breaking sales. No one knew of the mindboggling commercial successes that lay ahead. So art journalists just stuck to speaking about art, and not the market. The curator of the show was Ranjit Hoskote, whose ‘young’ age and deep understanding of art Sabavala couldn’t help but refer to throughout the evening.

To most people, Sabavala’s style was predominantly Cubist—where the subject in the painting is shown as randomly angular and geometric, a style made famous by Pablo Picasso. But Ranjit strongly feels that the tag of Cubism has restricted us from appreciating the brilliance of Sabavala’s art. “Sabavala was not attracted to the ideological content of Cubism, which was about a revolution against the stasis of bourgeois society and its smug academic art. Sabavala was more interested in Cubism’s discipline in form, which helped him appreciate the play of light and structure,” says Hoskote.

That particular evening, one of Sabavala most significant works hung in the hall where we stood. It was Cobweb Cloud, painted in 1973, which had since entered a private collection. This work was in the news again, of late, with auction house Sotheby’s selling the painting for Rs 1.2 crore. Clouds were, incidentally, the artist’s favourite subject. In Cobweb Cloud, he spun a delicate web of clouds across the canvas like a mysterious landscape, making them look both trapped and released at the same time. This work is pivotal to understanding Sabavala’s personal style, which was beginning to overshadow his training in the strict structural style of Cubism. While this landscape of clouds continued to have the characteristic angular forms of Cubism, it also blended in subtlety by the softening of the image and use of mild colours. (Interestingly, the proceeds from the auction of Cobweb Cloud have been dedicated to the promotion of teacher training and integrated education through the Sir Shapurji Billimoria Foundation Trust.)

When the art market scaled new peaks in 2006, the prices of Sabavala’s works went up too. Even though they never broke any industry record or topped any list, the prices were an unprecedented elevation marker in his career. In 2010, a painting called Casuarina Line fetched Rs 1.7 crore at a Saffronart auction. And this year too, Saffronart placed great importance on two of his large landscapes, The Inland Seas II and Flight of the Cranes II, which went under the hammer on 20 September.

But one must remember that all this market hype and success didn’t push Sabavala into an accelerated drive to produce new works. He maintained that dignified calm and pace which was always an essential part of his personality. Born in 1922 to an affluent Parsi family in Mumbai, Sabavala’s career spanned more than six decades, and he was awarded the Padma Shri in 1977. After battling lung cancer for the past two years, he succumbed to respiratory failure last month.

His Westernised image and lifestyle was in total contrast to his works. And for that, he was often misunderstood as being disconnected with India. He discovered his love for painting at the age of 23. Having studied art in Paris and settled in England for a while, it is actually because of his love for India and yearning to understand it better that he returned in the early 1950s. “Very few know that he had extensively travelled across India, spent time at the Munger ashram and was a deeply spiritual man. And how can you miss the Indian colours in his canvases that were full of browns, ochres and reds? He saw himself as a pilgrim. And perhaps that’s why he never belonged to any clique or club like the popular Progressive Artists’ group of the late 1940s, which included masters like Souza, Raza and Husain,” says art critic Ina Puri.

It is this individualism that has also come to define Sabavala’s style best. He is the artist who will always be remembered for bringing Cubism to the landscape of Indian art. Cubism, that is, with a twist.

Sahar Zaman is an independent arts journalist, newscaster and curator