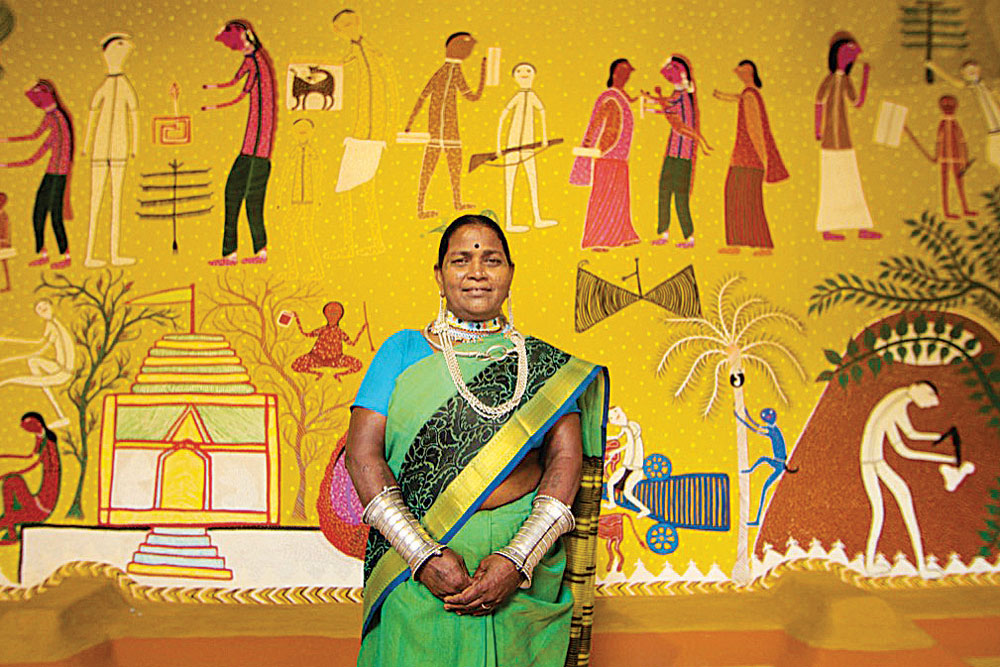 Bhuri Bai with a mural by her at the Madhya Pradesh Tribal Museum (Courtesy: Faraway Originals)


AS A SEASONED chronicler of artists’ anecdotes, I can sense the ‘nut graph’ of the story they want to tell the most through what they tend to repeat the most. By sifting through their subconscious reiterations of a fact, an idea or a feeling, one can unwittingly arrive at the unspoken truths that mark their narrative cliffhangers. In the case of the indigenous artist intellectual, Bhuri Bai, though, the plot thickens substantially, especially since her repetitions are echoed through translators and curatorial agents. Her repetitions seem informed by the threat of erasure.

Born in the mid-1960s in Pitol in the Jhabua district of Madhya Pradesh, Bhuri Bai seems to regularly stage a resistance to the epistemic violence historically inflicted by the literate upon the illiterate. She reiterates, at every given opportunity, the pioneering nature of her intervention within contemporary art history, so much so that the second line itself of the introductory text of the online exhibition, Bhuri Bai: My Life as an Artist, by the Museum of Art & Photography (MAP) firmly establishes the crux of her legacy. ‘She was the first woman from her community—the Bhils—to paint on paper and canvas.’ The further one explores the exhibition, curated by Nathaniel Gaskell, Shrey Maurya and Mustafa Khanbhai in collaboration with Bhuri Bai, the more glaring this biographical detail becomes. Through the caption texts that are infused with her voice, we are guided by her subjectivity, a possible corrective to Bharat Bhavan’s early strategy of captionless-ly displaying Adivasi art.

What is she encoding through her consistent emphasis on the novelty of the material nature of her artistic undertaking? ‘Over the course of our conversations with Bhuri Bai, it became clear that it was particularly important to her that she be recognised as the first to make a foray into the mainstream art world—it was part of how she took pride in her identity as a Bhil, as an artist, and as a woman,’ writes Gaskell over email. ‘She is also adamant about her position vis-à-vis other Adivasi artists and is quick to remind us that she was there before many other now well-known artists arrived at Bharat Bhavan. She has also very consciously and pragmatically marketed herself with this in mind, as her paintings are her primary livelihood.’

Is this underlying narrative about Bhuri Bai’s prescient experimentations with paper and canvas a shorthand counter to the oversimplified narratives regurgitated by mainstream media, academic discourse and a capitalist art world that enshrine her legacy solely as someone who transitioned from being a daily wage labourer to a commercially successful artist, who was awarded the Padma Shri this Republic Day? Most writing about her neglects the colossal nature of the paradigmatic shift at the level of subjectivity and praxis she had to undergo in order to secure her art-historical legacy. As her early encounters with painting were ritualistic, the ability to expressively practise art as a form of livelihood was made possible through contact with art institutions. Yet, it could be argued that it wasn’t necessarily always on her terms.


The MAP exhibition affords us a privileged glimpse into how Bhuri Bai claimed artistic agency, accommodating into her visual vocabulary the environments she was osmotically imbibing. Bhuri Bai handholds us through her childhood in the first part of the exhibition as her translated voice accompanies select paintings from her autobiographical series commissioned by MAP in 2018. She begins with a visualisation of the house in which she was born: “Before the monsoon, we would bring three types of khakra, tie the leaves together with the support of a bamboo stick and make our whole house like that.” But of course, the mud house rarely withstood the rain, which meant they had to be continually rebuilt, “by repeating the same process of knotting leaves and plastering the walls with cow dung and sand”. Pausing on this detail allows us to reflect on the symbolic relationship between the cow dung-laced mud walls that serve as the canvas upon which Pithora painting is ritually performed through community collaboration. Bhuri Bai locates her selfhood within her house. She hinges her narrative upon this domestic structure, reminding us of how it often didn’t withstand the monsoons and had to be rebuilt.

“This bird is a bheldi, out looking for food with her chicks. Having found this tree, the bheldi plucks the berries from it while her chicks watch,” says Bhuri Bai,

This detail took me back to an anecdote about Taloi Havini, an artist born in the now autonomous region of Bougainville, curator Diana Campbell-Betancourt shared from an interview the latter did with the artist. “She said where she comes from, they burn the village huts, not because there’s anything wrong with them, but so the community will remember how to make them,” Campbell-Betancourt said. I was caught off guard by this casual wisdom about objects as carriers of systems of knowledge and their position within indigenous place-thought, which was never respected by Enlightenment epistemologies that chose, instead, to vitrify them, extracting and isolating them from their native contexts, instituting a kind of plunder that relied on the uninformed complicity of indigenous people.

Bhuri Bai: My Life as an Artist has been cleverly adapted to accommodate the display possibilities of the online medium. The webpage serves as a wall. There is a gradual accretion of visual detail. The scene is set layer upon layer. Bhuri Bai begins with the mud house in which she was born and moves conceptually outward, at first immediately beyond the threshold presided over by her mother from whom she learns the basics of farming, and steadily into the forest, and then the infrastructural setups, like trains, that connected her community to cities while also enabling their displacement. Bhuri Bai, the second of five siblings, is recruited by her mother and taught the basics of grazing cattle, collecting fodder and de-weeding the fields. “But I was young, I didn’t know much. It was difficult for me so I would end up plucking the wrong plants and then my mother would scold me,” she tells us, foreshadowing a harsh allergic reaction she would contract in her adult life upon contact with a poisonous plant, which she believes was cured by her art.

Her early life is intricately bound to an indigenous system of place-based relationality, which manifests in all her later drawings. Her signature dots, for instance, hark back to her memories of the dots in Pithora painting and their proportional relation to varying sizes of corn.
When Bhuri Bhai was 14 or 15, her house in Pitol in Madhya Pradesh burnt down. Though she was in Dahod in Gujarat with her father and her sisters, working as construction labourers building a landlord’s house, her mother, a younger sister and a brother were trapped along with their animals. They were rescued, but their animals died. For days the family lived in a makeshift grass hut before they were able to rebuild. At 17, she moved to Bhopal with her husband, carrying with her the relational universe. She found employment as a wage worker at the construction site of the Charles Correa-designed Bharat Bhavan, along with about 100 other tribal and rural migrants. This information is important not only because it sets the scene for artist and writer Jagdish Swaminathan’s ‘discovery’ of Bhuri Bai’s artistic talent, but also because it subtly implies the irony of a museum that in part relied on the same extractive conditions that ‘mine’ indigenous thought the way colonial powers ‘mined’ native consciousness.

“Even though there were no peacocks in my village, they are my favourite birds. Even as a child I loved imagining peacocks playing around me,” says Bhuri Bai

Bhuri Bhai manages Rs 6 a day in Bhopal, more than in Pitol. One day, Swaminathan approaches the labourers to enquire about their lives, communities, rituals and customs, asking if anyone among them knew how to draw. ‘Encouraged by her sister and brother-in-law, who acts as a translator, Bhuri Bhai tells Swaminathan that she had made drawings on the walls of her home when she was a child,’ a caption text informs us. Swaminathan insists that she make a few paintings for him. “We didn’t understand a single word of what he was saying,” Bhuri Bai says. “We didn’t understand Hindi back then. He had big hair, he was very scary-looking to me. He always had a cigarette or a beedi in his hand. I didn’t know who he was!” Over the next five days, she occupied the stairs of a nearby temple and tried to navigate holding a paint brush, dipping it in poster colour and painting upon the flat surface of a roll of brown wrapping paper.

“At home we made colours using turmeric, soot, leaves and red soil and used chewed twigs or a piece of cloth to make dots,” Bhuri Bai narrates. The first paintings she made used simple colours and depicted traditional tattoo motifs as well as scenes from village life, which Swaminathan later bought from her. “It struck me that for each day of labour I earned Rs 6, and yet, just for sitting and painting, I earned Rs 10 a day! All this was a bit strange for me initially, but it felt good that they were paying me so much. I promised myself that the next time [Swaminathan] came I would paint more beautifully, whatever came into my mind. I would put more effort into painting. It was a great venture for me.”

“This is a family with five children going to attend the festival of Bhagoria that begins around eight days before Holi,” says Bhuri Bai

There was a challenging newness to Bhuri Bai locating her seated body in relation to paper. “If I sat on the right side of the paper today, I painted in that orientation,” she says. “The next day, I sat on the left side, so I painted using that orientation. The paintings were all upside down, never facing one direction. The image was straight in my head, but I made it upside down, so Swaminathan ji liked it a lot. This is what he thought was special about my work.” Over time she would make the medium her own. Perhaps for Bhuri Bai, the shift to working on paper was so momentous because it demanded physiological and psychological rehabilitation.

“This is an amli tree. A buffalo is napping under its shade and a man is climbing up to pluck the berries. The man is shoving away the monkey on top,” says Bhuri Bai

The exhibition tenderly reveals how Bhuri Bai discovers her artistic self through her negotiation with an alien medium and how she goes on to become an institution herself by training others from her community, empowering them to explore their subjectivities. Her pedagogical strategies may well embody what Papaschase Cree educationist Dwayne Donald theorises as ‘Indigenous Métissage’, a place-based curriculum informed by an ecological and relational understanding of the world, one that fosters reciprocal discourses in the coloniser and the colonised through the ethic of historical consciousness.

(Bhuri Bai: My Life as an Artist can be viewed at map-india.org/exhibitions till the end of February)