Balladeer of the Masses 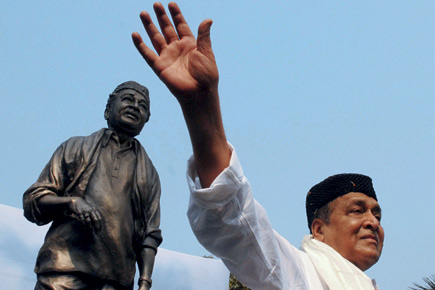 
This anecdote goes back to the 1970s, during the peak of the Naxal uprising in eastern India. Bhupen Hazarika, after performing at a late-night show in Kolkata, was returning home in an Ambassador car. To avoid traffic, he took a shortcut. But within minutes came an obstruction: the car was stopped by a gang of young shawl-clad, bearded gunmen. Petrified, Hazarika stepped out of the car. Seeing the singer—to their grand surprise—the ferocious young men dropped their guns, touched his feet, and said, “Who on this planet will kill you, Bhupenda?” The next morning, Hazarika got phone calls from other star singers, informing him that they had been looted by the same ‘dacoits’ while returning from the venue.

This is one instance among hundreds of others that could help explain how a man who never was a conventional megastar could shatter such a huge mass of land and people with his death. On 6 November, the day after his demise at the age of 85, all newspapers in Assam had one thing in common—not a single story other than this was carried in any of the 14-page broadsheets. All roads in Guwahati led to the historic Judges Field, as hundreds of thousands thronged for a last glimpse of the music maestro, whose body was kept there for two whole days.

Bhupen Hazarika was the balladeer of the masses. Immensely popular as the ambassador of east India’s rich folk music, ‘Bhupenda’, as he was fondly called, became nothing less than a legend in Assam, his birth land. Our grandparents, the aged of today, narrate stories of how a young Bhupen Hazarika would come to sing in the remotest of small towns. My father, who came to be closely associated with him during the tumultuous Assam Movement in the 1980s, tells me, “Assam was burning in inter-ethnic violence after the imposed elections of 1983. The All Assam Students Union (Aasu) decided to launch a month-long integration drive to be led by Bhupenda. We travelled through nooks and corners of the state. At every village, our convoy would be stopped, anguished villagers would draw him out of the car and accord him a hero’s welcome—unimaginable even today.”

His popularity amongst all ethnic groups of Assam is a matter of some incredulity. At that time, the Aasu could penetrate some severely affected belts only because of Hazarika. “At a particular Bodo village near Gohpur in Golaghat district, where tensions between the Assamese and Bodos had reached a climax, we began our programme with a Bodo speaker. The whole crowd got agitated. ‘What do you think of us? No one will be allowed to speak until Bhupenda starts,’ they cried,” my father recollects.

Generation after generation in Assam, West Bengal and Bangladesh grew up listening to his immortal classics. He was the wilful optimist who always dreamt of weaving together various ethnic aspirations to create a ‘Golden Assam’, integrated in harmony.

Linguistic jingoism and radical assertions of upper-caste Assamese Hindus had led to a fragmentation of undivided Assam in the 1960s. Hazarika was dead opposed to this. ‘The broad clouds of the wet Cherrapunji sky, cuddle our Brahmaputra in the shape of rains,’ he sang in the Assamese song He He Dhole Dogore, advocating the unity of Assamese in the plains and Khasis in the Meghalaya hills. And lyrical ballads such as Siangore Galong and Tirap Ximanto created such a unique bond between Arunachal Pradesh and Assam that the love is still intact.

In 1960-61, when the Bhasha Andolan in Assam took a violent turn, it was Hazarika’s magic that bridged the gap between the Assamese and Bengalis—‘No alphabetic letter for the language of love’, he sang. He used his music as a potent tool in bridging divides, but the same music also reflected a deep-rooted commitment to his Assamese roots, its people, language and culture. Assam had had a fraught political relationship with New Delhi since Independence. In this scenario, Hazarika appeared like a messiah of the Brahmaputra valley, representing their aspirations.

Academic Sanjib Baruah once wrote, ‘He is probably the most influential figure in postcolonial Assamese cultural life.’ Hazarika’s ballads chronicle the political history of Assam, the central metaphors revolving around the Brahmaputra river and Bohag Bihu, the spring festival of Assam.

Benedict Anderson’s popular work on nationalism, which describes it as ‘imagined into existence’, touches the spirit of Hazarika’s lyrical narrative somewhat. He always envisaged the creation of a great Assamese ‘nationality’, inclusive in its very essence. He constructs a landscape of ‘the beautiful mother Assam with untold virtues, the land of sunrise in the east of India’. The song Mahabahu Brahmaputra envisions the mighty river as being the holy site of great synthesis down the ages. His became a powerful voice in the articulation of subnationalist Assamese aspiration, singing, ‘Bohag is not just a season; nor is it a month; it is the lifeline of the Assamese nation, and the verve of the masses.’

Even so, Hazarika could successfully direct subnationalist Assamese sentiments towards a pluralist arena of ‘Indianism’. Take, for instance, the six-year-long Assam Movement that started in 1979 with a demand to deport illegal Bangladeshi immigrants, which later evolved as a justified politico-economic struggle of the Assamese people seeking a legitimate space within the Indian political system. At that crucial historical moment, Hazarika, the undisputed champion of cultural politics, authoritatively showed Assam the way ahead. One of his iconic songs, written during this time, goes, ‘Today every Assamese is a good Indian, and every Indian who came to Assam from faraway corners, making her their motherland, is a new Assamese. And we would rather live like this.’

Such an affinity for pan-Indian cultural life can be traced to Hazarika’s early days with Jyoti Prasad Agarwalla and Bishnu Prasad Rabha, two patriarchs of modern Assamese culture. The volatile independence struggle of the 1930s and 1940s induced a socialist fervour in the young Hazarika, which helped him look out to the Gangas, Narmadas and Godavaris for wide-perspective inspiration.

Recollecting his stay at Banaras Hindu University in the 1940s, Hazarika once wrote in an autobiographical essay, ‘Proximity to towering intellectuals like Radhakrishnan, SP Mukherjee and Madan Mohan Malaviya and stories of friends from different parts of the country made me realise that we are all the same.’ He later sang: ‘Love for my mother doesn’t mean hatred for the other’s.’

Fusing this attitude with an unparalleled personal aura, he soon became a favourite in cultural hubs like Kolkata and Mumbai. But Hazarika, though he had a Dadasaheb Phalke Award by his side, chose to stay away from the hustle and bustle of commercial Bollywood cinema. Rather, he went on to give the nation songs like Dil Hoom Hoom Kare and O Ganga Boichho Kaino, the latter becoming an anthem of people’s struggle across the country.

Looking back, one is certain to be puzzled by varied streams of his musical evolution. Despite maintaining strong subnationalist leanings, he displayed a mellow Indianism through innumerable songs for larger causes. Deep intellectual formations during his eventful sojourn at the prestigious Columbia University, and his profound friendship with singer and activist Paul Robeson in New York, encouraged him to devote a life of music to the service of humanity, transcending boundaries. Robeson taught him, “The strum of a guitar can alter the way a society thinks.” Till his last concert, Hazarika kept enthralling audiences with Robeson’s epic song, We are in the same boat, brother.

The Beatles sang, ‘Everybody’s talkin’ bout this-ism, that-ism, all we are saying is give peace a chance.’ Despite varying ideological bends, Hazarika too was a world citizen seeking true peace, singing the anthem of humanity from Tokyo to New York, Mississippi to Danube: Manuhe Manuhor Babe ( If man is indifferent to man, who else will think of man?). Equally a legend in the endless green plains of Bangladesh, he sang, Ganga aamar ma, Padma aamar Ma. Jai Jai Nabojat Bangladesh (Hail newborn Bangladesh), which he composed and sang in 1972 at the Berlin Music Festival, celebrating the liberation of the new country, became the unofficial anthem of Bangladesh after Amar Sonar Bangla.

Indeed, the self-confessed ‘roving nomad’ belongs to all, cutting across caste, creed and religion, crossing borders of states. With his demise, South Asia has lost one of its most influential cultural communicators. But his songs and spirit endure. For he sings, ‘Though for so long have I swum in the confluence of oceans, I’m yet not tired; coz’ the tides in the Pacific of my mind continue to be restless.’