SRK’s big Diwali release is a damp cracker, and an offensive one at that 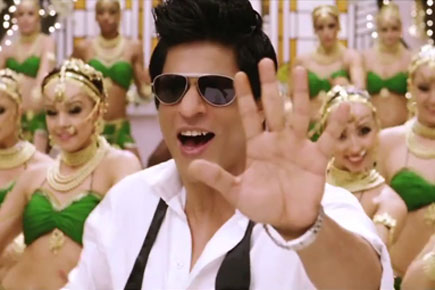 SRK’s big Diwali release is a damp cracker, and an offensive one at that


Ra.One is an insult to the intelligence of both the comic book superhero and the film’s audience. Superman has Kryptonian strength; Spiderman’s combat power comes from a radioactive spider’s bite; and Iron Man has his armour suit. They all want to fight evil and jokers who threaten anarchy and spell doom for the planet, right?  Back home, a gaming character called Ra.One assumes superpowers from cables and holograms, manifests itself off-screen as a sort of mannequin-turned-cyborg, and bays for revenge against a school boy with shampoo-commercial hair. Ra.One is evil personified, like the epic villain from the Ramayana. Ra.One wants to kill because the aforementioned boy defeated him, the gaming character, in the very first round of combat in a video game by trying out Bruce Lee kicks and curls in the air and playing the part of gaming hero G.One. Repeat the name and it sounds human (like Jeevan, got it?).

The reason for the travesty and evil that Ra.One unleashes can be traced to the bumbling idiocy of a game designer based in London (Shah Rukh Khan) who is introduced with a background score that calls him paithiyakara, Tamil for lunatic.

The rationale for this game designer’s ludicrous behaviour and for his son’s calling him an “uncool dude” is revealed at the beginning. The designer is a curly-haired, nutty Tamil Subramaniam, a wimpy buffoon who likes to eat noodles in curd and lick it off his fingers, scolds his son in faux Tamil, hums Carnatic tunes, and gets kicked in the goolies when he is not sending trite messages of love and goodness to his shampooed son.

If the Badshah of Bollywood, who reportedly has a large—and, by the industry’s presumption, sophisticated—fan base overseas as well, can scrape the bottom of the barrel trying to pass off outdated ethnic caricatures as cute, you can only accuse him of bad taste, poor humour and provincial prejudice.

When Subramaniam is bumped off, his lush wife (Kareena Kapoor) perfunctorily mourns over his coffin (duh?), and ends up taking a flight back to a Tamil suburb in Mumbai with ayyo-type neighbours and opts to dance the Chammak Challo to G.One’s tunes. Perhaps Khan conveniently forgot, while offering his paean to his predecessor Rajini from Endhiran, that the south Indian superhero and his ilk don’t try taking such racist digs in their regional hits to tickle the audience.

If absurdity is its calling card, Ra.One is also a mega-buck affront to an audience sensibility that is presumably reared on gaming, mythology and Bollywood masala. Despite some stunning special effects and racy action sequences, incongruity and unpalatably low levels of humour turn the film tasteless in parts. With the threat of the villain hardly hair-raising, and the chase and hunt scenes eliciting yawns, the rivalry of the two gaming characters only seems like an awkward ambush on logic. Worse, a lack of connect makes it low on Bollywood’s main staple: emotion and sentimentality. The grieving widow takes a fancy to the robotic cyborg in no time at all. The Bruce Lee kickass kid moons over him as ‘Appa’ and helps him fight in the climax. Ra.One vanquished in round one dissolves into crimson crystals on the asphalt highway, only to pop onto a billboard model and turn into a villain. If it was a nod to Terminator, this is a sad cock at the movie with a grim vision of a future world of mayhem and destruction. Intermittent laughs are squeezed out of wink-and-nudge gay jokes, with Khan morphing into a pierced punk with rings all over his body to pass security at an international airport.

While Ra.One doffs its cyborg head to other superhero movies, including Terminator, Spiderman or even the desi Endhiran (if only for a chuckle), it remains a pale imitation of these master comic hero tales, casting none of their magic. Despite the spectacular action sequences, be it the use of a local train as a treadmill or the gleeful destruction of Mumbai’s iconic landmarks, it lacks the thrill of a chase-and-kill movie. The villain remains a six-pack bronzed model with no worthy anger, apart from a video game loss. Cameos that toss in local heroines and heroes in imitation of gaming sequences raise a few forced laughs. The lead pair have no chemistry.

The film’s producers may crow that they’ve raked in big money with stupendous Diwali collections at the box office, but Ra.One remains a damp cracker, and an expensive one at that. It’s just sound and smoke.