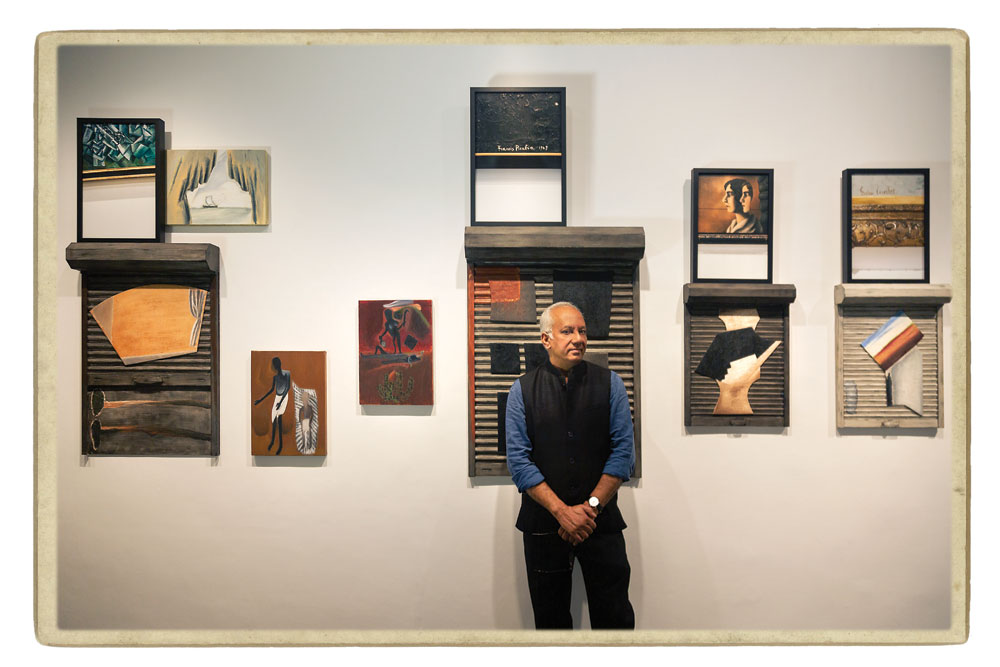 
HAVING ENTERED VADEHRA Art Gallery to view Atul Dodiya’s ongoing exhibition, one infers, through Ranjit Hoskote’s wall text, that we are being offered a set of shrines. The show’s title—Stammer in the Shade—is elusively cryptic. Dodiya, whom I meet later, informs me of its reference to the shadow region that occupies the underside of paintings by artists like Picasso, Van Gogh, and Edward Hopper. He has been obsessed with what Hoskote refers to as the ‘penumbral strata’, and his archive consists of over 500 photographs that chronicle his encounters with it during his visits to European and American museums. It’s a fixation that has run parallel to his profound love of ‘The Masters’, from pre-Renaissance until the 20th Century. This passion has repeatedly manifested itself in his work since the inception of his artistic practice. He is even credited as being one of the first contemporary Indian artists to syncretise Indian and Western painting traditions. “I was interested in that shadow part,” he tells me, speaking specifically about the ‘soothing grey tone’ that results from the manner in which the light shines on these ‘masterpieces’.

Dodiya doesn’t censor his reverence towards the people from whom he has learned so much and the artistic lineage to which he self-identifies. “Whatever I’ve been doing is stammering in the shade of these great masters,” he says. Dodiya thought he would use the details of the frame and the shade underneath and place them upon his signature canvases of sorts, the rolled metal shutter which he began using back in the 90s to reference his memory of curfew during the Mumbai riots. “Then I thought of putting them up on the top of the shutter, I felt they were like a shrine,” he says. “This is my way of looking at my heroes, probably. At the same time, I wanted something more abstract; this feeling about painting, about other people’s painting, that experience I always feel is very mysterious but also mystical. I thought I would place cut-out things and place them on the shutter, not necessarily related to the above image; that’s how the abstract form emerged.”

The ensuing composition of what he calls ‘baby shutters’, scaled back versions compared to what he normally uses, placed below a photograph of the shadow region underneath the bottom of a masterpiece upon which lie all manner of abstracted forms constitute the shrine, and there are 13 of them at the show. He describes how this form evolved as “a surprising, baffling experience”, one he couldn’t quite make sense of. Parallelly, he was working on landscapes, and when he thought about how to lay out his solo within the two floors of the gallery, he decided to interleave the two forms. “It somehow worked,” he says. “The way it got juxtaposed.”


Hoskote theorises that the show’s title is deceptively self-deprecatory. ‘The artist is not, in fact, in the shadow of the masters, nor does the stammer reflect a deficit. By de-focusing and de-centring the masters’ works, he claims them from an oblique angle. By interrupting the standard fluency of language, he revitalizes its raw, dialectal possibilities.’ The art critic and poet perceives this body of work by Dodiya as an ‘artistic memoir that assumes the form of a katha, a story with nested episodes, sotto voce annotations, and acts of aavartan, the circling of return, recognition, refinement, and renewal.’

Dodiya himself has always expressed an openness towards viewers interpreting his work through the prism of their own subjectivities, even though he isn’t necessarily invested in making it easy for us to enter their universe. The many levels of relentless and pedantic cross-referencing and supposedly playful techniques of disclosure and veiling, revealing and withholding render many bodies of work within his oeuvre highly esoteric. The feminist viewer cannot stop herself from asking what is being enshrined and by whom, just as the suppressed feminist orator cannot help questioning who gets to speak and why.

“This is my way of looking at my heroes, probably. At the same time, I wanted something more abstract,” says Atul Dodiya, artist

Is it possible, however, to bridge the gap between these disparate subjectivities by ascertaining the vantage point from which Dodiya operates? For a painter to admit to stammering in the shade is to acknowledge the possibility of doubt in one’s vocabulary. It is intriguing that Dodiya should rely on a speech-impediment to describe visual inarticulacy. By Hoskote’s logic, the stammer does not reflect a deficit. But whose word should we go by, Dodiya’s or Hoskote’s? Is it even the artist who experiences the stammer in the shade or is it the viewer who struggles to paraphrase the fragmentary nature of Dodiya’s citational logic?

One ‘shrine’, titled Rise, lured me with its use of quotation marks on the shutter. It turned out to be portrait of Eugène Murer, by Auguste Renoir. Google tells me that Murer was an artist, celebrated pastry cook, restaurateur, novelist, poet, and avid collector of Impressionist paintings. He had called Renoir “the greatest artist of our century”. The page I was led to, on the metmuseum.org server, included this tidbit of information: ‘It has been suggested that Murer’s pose and gaze in this work served as a model for Van Gogh’s famous portrait of another great Impressionist collector, Dr. Paul-Ferdinand Gachet, Murer’s neighbor in Auvers.’ Were you an avid scholar of Western art, you wouldn’t have had to use the cheat code I used. Were you an eager worshipper of the canonical works of the male artistic genius, you would easily figure that the emotive landscapes Dodiya has been making directly reference and offer tribute to Carlo Carrà.

Still, it’s possible to ascertain that the source of Dodiya’s emotive landscapes is quite simply, a raw state of artistic wonder. Over the last six-to-seven years, Dodiya has been taking his morning walks at the Somaiya College campus in Vidyavihar, near Ghatkopar, where he lives and maintains his studio. He therefore found himself doing small-scale watercolours and gradually attempting landscapes. He was captivated by the sense of freedom he felt, in comparison to figurative work, which he is known for. “I thought, since I’ve never done it ever, just for my own curiosity, playfulness, freedom, I’d do it. From pre-Renaissance period to modern times, landscape [as a genre] was always there, which I enjoyed. In my series of paintings on Gandhi, my photo-based works, my treatment is always smooth. Here there was the opportunity to apply heavy, solid paint for the sky… I used beeswax along with the oil [colours]. It has a viscosity. It makes the colour matt; it dries very fast; it’s almost like loading cement.” Dodiya had been aware of American artist Jasper Johns’ use of melted beeswax. But he wasn’t interested in a liquid-like effect. “If you mix it with Dammar resin and turpentine and let it dry, then the whole paste is almost like Vaseline.” He was excited by the texture he was arriving at. “When it’s semi-dry, I rework it, so you get these fantastic brushstrokes. That’s how the landscape was happening.”

While most other bodies of work by Dodiya are the consequence of premeditation and are relatively crouched within solid conceptual scaffolding, these landscapes capture a confrontation between the artist’s desire to yield to spontaneity and his compulsive tendency to control all painterly variables, particularly the proclivity towards aestheticising. The works exhibit a vulnerability that feels daring, that is most certainly a sign of risk-taking. They are among his most relatable works. You see, within controlled, sweeping, diagonal brushstrokes, sudden spontaneous-seeming strokes of primary colours ensconced on the boundaries between certain fields of colour. Dodiya has testified that these works evolved because he decided to give himself permission to paint without preconceptions. “For this one I thought, forget about the show, just paint what you want, just allow yourself to, don’t think that this is the space where it’s going to be.”

These landscapes could be at the heart of the self-professed stammer. And so what if the stammer represented some deficit? Can we not learn from our stammering how to pronounce more processed thought? It’s possible to perceive these new landscapes as reflective of a prospective transition in terms of how Dodiya estimates the possibilities of his own future practice. Something wonderful and not wholly allusive lies at the heart of this new work, but to get closer to what it is capable of being, it’s likely Dodiya might have to get past reiterating what has already been done before.

(Atul Dodiya’s Stammer in the Shade will run at Vadehra Art Gallery, Delhi, till February 29, 2020)