Art in the Time of Eternal Uncertainty

Lahore-based artist Ali Kazim, whose paintings were showcased in Mumbai recently, talks about nudity, freedom of expression and why interest in Pakistani art is on the ascent 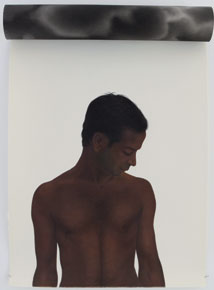 Lahore-based artist Ali Kazim, whose paintings were showcased in Mumbai recently, talks about nudity, freedom of expression and why interest in Pakistani art is on the ascent


It is often in a climate of strife and turbulence that good art is born. “In Italy for 30 years under the Borgias,” Orson Welles said half-a-century ago in The Third Man, “they had warfare, terror, murder, and bloodshed but they produced Michelangelo, Leonardo da Vinci, and the Renaissance. In Switzerland, they had brotherly love, they had 500 years of democracy and peace, and what did that produce? The cuckoo clock.”

Little wonder then that of late, there has been an extraordinary flourishing of art and literature in present-day Pakistan, a country eternally living in times of uncertainty. Clearly, it’s not just Pakistani books that are attracting Western attention, but also its art. Standing shoulder to shoulder with Pakistani authors in raising questions and seeking answers are their counterparts in visual art—namely, Rashid Rana, Shahzia Sikander, Waseem Ahmed, Nausheen Saeed, Imran Qureshi, Aisha Khalid and Hamra Abbas—who have in recent years become dominant figures in the Pakistani canon. And to this roster of accomplished artists from across the border, one may add Ali Kazim, who many say is a young painter to watch out for.

Art critic Aasim Akhtar describes the Lahore-based artist’s work as “one of the most erudite achievements in contemporary art of the past decade”. The 34-year-old, who recently had his first solo show in Mumbai at Jhaveri Contemporary gallery, is mainly a figurative artist with identity, the self, spiritualism and existentialism as his major themes. At the gallery, divided into four rooms, there were only a handful of his works on display, befitting his reputation as a ‘slow painter’.

Kazim grew up as the youngest of five siblings in Pattoki, a small town in Punjab. He began his career as a circus hoarding painter and went on to work as a potter, carpenter and woodcarver. Eventually he moved to Lahore—where he now has a studio—to work as a dispenser in a hospital. This proved to be a great learning ground, as he made life studies of the dying, which became his portfolio for art school admission. ‘All my previous jobs helped me understand the various skills [that] became a part of my studio practice,’ says Kazim over email. His father was a teacher and farmer, who worried endlessly about how his son would ‘survive on painting’. Kazim jokes that he was literally raised with “livestock” on Punjabi farmland.

Yet, in his art, there is hardly any hint of the pastoral. Instead, over the years, Kazim has exclusively explored lonely male figures, suspended as if from a spiritual space. Like his earlier works, his new suite of paintings takes the human body as its primary subject, examining skin, membrane and blood vessels. In an essay on Kazim, curator-writer Eddie Chambers notes, ‘We are never quite sure what to make of the narratives in Kazim’s works. Paradoxes abound. The figures he paints, all male, and for the most part only ever depicted from the waist up, are naked. Yet this nakedness conceals as much as it reveals. We might imagine that our gaze would render these naked or semi-naked men vulnerable. But these figures decisively empower themselves by excluding us from the privacy of their actions, gestures, body language and interactions with each other.’

Though his is an orthodox Islamic society, where nudity and displays of flesh are a strict no-no, Kazim says he has never faced any problem whenever he has exhibited his paintings back home. But he admits that artists in Pakistan have to be careful not to hurt religious sentiments. ‘Nudity is taboo but people still tolerate it.’

There is a thin line between nudity and aesthetics and beauty, he says. ‘What you might call nudity is simply anatomy. In any case, art doesn’t have a massive following anywhere in the world. Usually, it is seen by a select audience that is well-read, well-travelled and most of all, interested in art. For them, [the] human body is an accepted means of expression.’ Dispelling the notion that there is no freedom of expression in Pakistan, he says, ‘Actually, when people talk about Pakistan they forget that it is governed by a combination of laws that includes Islamic and British [practices], which we obviously inherited after Partition.’

Kazim recalls when his Topi Wallah series—depicting Muslim men in prayer skullcaps—was showcased a few years ago at Alhamra, an art gallery in Lahore, many viewers, far from being offended, actually scribbled encouraging remarks in the comments book. He says it’s merely a perception about Pakistan that will eventually pass.

Calling the Indian art scene ‘exciting and vibrant’, he says, comparatively Pakistani art is young. ‘It is still evolving. In the last few years it has attracted global attention. Slowly, I think, we will make our place in the world.’

As for his own paintings, they inhabit a world of their own. At once universal and intimate, his work often transcends frontiers of the personal, taking on a more metaphysical and devotional colour. The Topi Wallah series may appear as having religious overtones to a passive observer, but according to the artist, there is hardly anything religious in them. They are devotional only to enhance the visual tension. Essentially, the skullcaps were used as a motif, Kazim explains, ‘a way to connect or relate to the other world, an idea of spiritual engagement.’

Some critics, like Aasim Akhtar, find his art full of ‘visual puns’. Akhtar writes, ‘In much of his work, and particularly that of the last two years, it is difficult to suppress a smile at his humorous take on the act of perception.’

Predominantly, Kazim draws from the self, referencing his own body in various postures and positions. However, he says his concerns are less autobiographical than spiritual. ‘[The] human body is complex both in its physicality and as a thematic concern. The body, which performs a great deal of functions and ensures our survival without our conscious knowledge, goes through various emotional and spiritual phases. These works are perhaps glimpses of those moments it goes through.’ That the men are forlorn can be interpreted as their private moment in their private space, in possession of what one commentator called ‘an inner life’ of their own.

‘I don’t feel like disturbing their lone-liness,’ he says. Perhaps Kazim delights in letting them float in their private space. ‘I enjoy it very much,’ he adds.

Interestingly, his male figures have been described as being blessed with a concern for ‘beauty’. Whether it is his earlier paintings depicting men shaving their facial or underarm hair on Friday (as part of the ceremonial washing and cleaning of body parts) or those that proclaim the male fondness of sensual fragrance, does Kazim’s work signify for men, as Chambers wonders, ‘some sort of supposed cleansing or beautifying process, as it might do for certain women?’

To offer viewers a glimpse into his work process, the gallery also put up a video titled Ghusal (Islamic ritual bath), in which he is literally seen giving a bath to his paintings. Kazim has a soft spot for watercolour pigments and spare, flat backgrounds. Taking his cues from the miniature tradition, he works on wasli (multiple layers of paper glued together with an organic binder), applying thick coats of paint before washing it with water.

‘Working in the relentless sun and heat in Lahore,’ writes Hammad Nassar in Sacred Souls, Secret Lives: Painting by Ali Kazim, ‘drying time between washes… means that it can take him up to two months to finish one painting.’

Lahore is an ideal place to work. ‘I like the slowness of the town. It allows me time for myself.’

Though Kazim was slated to attend the Mumbai show, he couldn’t make it. But he insists it has nothing to do with Indo-Pak political tension. He says artists are ambassadors of pacifism. ‘We need to give peace a chance. Wars do not resolve problems. Let’s look at Europe. After fighting the horrible World Wars, they understood that war offers no solutions, [it] only creates problems.’