What emotion does to creativity 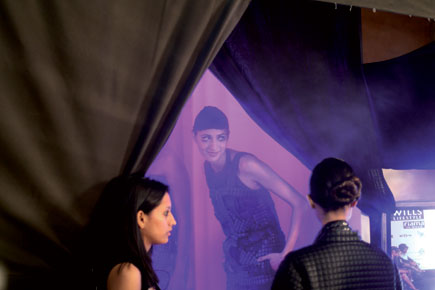 What emotion does to creativity


Another fashion week over. I have been advised by friends to refrain from reviewing or commenting on the collections of fellow designers. I am indifferent to most, but that’s for later. What I have attempted instead is almost a case study of sorts without the fancy terms one might expect accompanying it. I have a friend. Let’s call him Anand Bhushan. Like me, Anand is a designer. He started showing his label at fashion weeks in India around the same time as me. Being contemporaries who liked each other’s work, we naturally got along. Alcohol consumption and not-so-malicious gossip sessions helped seal the bond.

Anand makes pretty clothes. Glamorous clothes. Unapologetic about his pricing and textures, he developed a loyal following among international retailers. The domestic retail scene took a while to warm up to him. He was uncompromisingly irreverent when it came to making women look ‘ladylike’. He carried on with what he did, educating people one season at a time. That is important. Clothing, while utilitarian in purpose, also serves to reflect societal, economic and political conditions within a physical space. The fashion industry in India is still young and unorganised, and hence needs creative people to give it a soul.

Anand loved to work and party. Both with the same intensity. The Delhi social scene loved ‘hanging’ with him. People online constantly retweeted his hilarious quips on Twitter. His ‘Lata Mangeshkar’ impersonations have acquired cult status within our fragmented industry. All of this while churning out one beautiful garment after another. He was at risk of being known more for his personality than work. I asked him to quit attending social dos in Delhi even though I felt like a hypocrite doing so.

Why is a designer who is the life of every party, who is always smiling, not taken seriously? Should one be shrouded in black and bear a constant frown to be critically acclaimed? What happened to all the happy, shiny, successful people in fashion?

Meanwhile, Anand got himself a puppy. He christened him Muslin in tribute to the colour of the fabric we designers use for our prototypes. As with every newborn, Muslin’s images were all over Anand’s Facebook and Twitter account. The fashion fraternity gushed over him online. His photographs appeared in several magazines. Muslin was famous. Whenever Anand visited me in Kolkata, he would worry and fret about Muslin. Is he eating right? Did he sleep well? Put him on speaker phone, let me talk to him… you get the drift. On one such trip, Muslin fell ill. Anand returned to Delhi and his routine. Numerous visits to the vet. And then Muslin passed away.

We’ve become so cynical that even grief and anguish expressed on social media seems fake. Not the condolences for Muslin. Our circle of friends had never seen Anand this way. He used to smile. He was the life of every party. But, for a very long time, he didn’t.

Half a season came and went. It was time to ideate and conceptualise a new collection. Anand was now smiling again and seemed back to normal. In the run-up to fashion week, everyone probably thought he would come up with a smashing ‘pretty’ collection again. No one expected emotion. Mourning. Memories. Nostalgia.

Muslin was immortalised as a print, an embroidered motif, a neckpiece and more. Anand’s garments on the runway exuded emotion. Editors, bloggers (yeah, those) and viewers all banded around him. He’s critically acclaimed now.

All of a sudden, people want to chat him up, ‘hang out’ with him. Why? Because his collection had emotion? We’re so vapid that we grab the first offer of an emotional experience on the runway? I get that. What I couldn’t get was how the finish of Anand’s garments had improved so much, how his accessories had acquired a superlative finesse. His answer? “Kallol, I poured my heart into this collection.” And while it might seem naïve to think that an intangible attribute like emotion can transform physical aspects of a garment, the truth is that when you have a strong thread of emotion coursing through the creative metaphysical space, even working on autopilot works.

Anand is still the same. In fact, we just made plans for a series of nights out when he visits me in Kolkata this month. He’s had closure on Muslin’s passing away. He’s still the same. But does that mean if he does not have an emotional connect with his work next season, his ‘pretty’ dresses won’t get him high-fives and hugs from the fashion week intelligentsia? I don’t know. I do know that this fashion week, the underdog won. And how.