An Actor’s Take on Shivaji 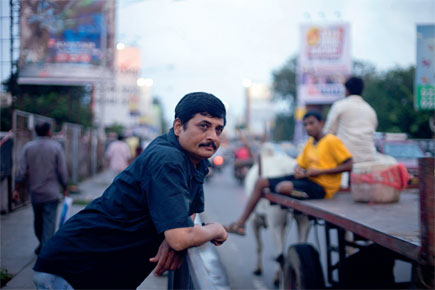 
Action! Dadasaheb Phalke is leaving for London to procure a camera for his movie. In this scene, Phalke is saying goodbye to his wife. Recalling the shooting of the scene, Nandu Madhav, the actor who played the role, says, “I got emotional, flared my nostrils and brought tears to my eyes. Actors are used to doing things the traditional way [that is—crying to the background music of a hundred violins]. The director Paresh Mokashi yelled ‘cut’, and said, ‘Why are you crying? This is not in our treatment at all. No crying!’ I didn’t understand. I got nervous and I said, ‘I don’t understand. I emoted so well. You show me what you want’. So Paresh stood in my place, smiled, and whispered in her ear, ‘This happened because of you,’ and walked away. My reaction was—my God!”

Prodded by the director, Nandu treated Phalke not as a brooding Prometheus of film history, but as a lovably quirky, humorous man. The character is famous, arguably, because of the human treatment. Nandu recounts this memory in his car. He has a way of tapping the steering wheel for emphasis and looking into the distance.

In another scene from Harishchandrachi, Phalke’s precious camera develops a technical problem. “It would be another occasion for violin music [in most films]. But Phalke and the cameraman only look at one another and consult a technical manual on camera repair.”

And while he is likely to be remembered for playing Phalke unconventionally, he regards himself as the actor who brought out the pioneer’s reformist aspects. While fans loved the treatment, Nandu delighted in the progressive attitude of the character. “[Even in those days], Phalke treated his wife as an equal, and involved her in the making of his film.” He liked that aspect because, he says, “I am an activist first, then an actor.”

He is a bold proponent of art for social change. He doesn’t particularly care that some might raise their eyebrows when he says, “I look at the social angle in each subject.” Then he says ironically, “Even if that subject happens to be the popularity of motorcycling.”

That is not the theme of his first play as director, which is drawing packed houses in Mumbai currently. The reserved, publicity-hating actor is in the news again for Shivaji Underground in Bhim Nagar Mohalla. It is an attempt to show the progressiveness of Shivaji, whom a few political parties have appropriated for their parochial agendas. “Shivaji belongs to all castes and religions. I had to get involved to bring that out… there were four plays in the script. I edited three plays out of it. That took me about six months. Then came one hundred days of rehearsals.”

In the play Shivaji Underground…, two folk poets square off in a poetry slam (jugalbandi) on the subject of Shivaji. One of the poets is a conservative, whose version of Shivaji is a demigod endowed with a magical sword by Goddess Bhavani for the purpose of killing Muslims. The other poet is a liberal who emphasises little-known facts about Shivaji (1630–80), such as his Muslim bodyguards and sardars, his promotion of able men regardless of their community, and his emphasis on farmer-friendly reform. Drop the mythologisation of Shivaji, let’s talk instead about his policies, says this poet. (He wins the poetry slam, by the way, as he imaginably well might in real life too, because he has some very catchy songs.)

“This is a propagandistic play,” Nandu says, “But I strove to make it as theatrical as possible. Because propaganda gets boring in about ten minutes. I put it in the language of theatre. It incorporates many forms of folk art, without getting patchy. I have put in cohesive links throughout the play. Even between scenes, there is a song playing.” The songs are sung live on stage, as you would expect of folk art.

Shivaji Underground… is a hilarious satire on right-wing Maharashtra politics, but also has a 17-minute serious discussion about historical falsehood. “I’ve never had a flop show,” Nandu grins, “Even the 17-minute discussion is heard with interest. A punch-line is not just about laughter, it can also make you pause for thought.” (While I thought the discussion was kitschy, I noticed that the audience was clapping throughout, and it was a pretty sophisticated audience at that.)

Shivaji Underground… is a break from films for the choosy actor, one of whose very first films was directed by Amol Palekar. “I guess I am notorious for rejecting roles,” Nandu says, with another smile. Three-four years ago, Marathi cinema appeared to produce nothing but slapstick comedies. “Ninety per cent of those films flopped,” he says. Today, however, “Eight to ten Marathi films in a year are of national or international quality.” They are subject-driven films, and they make a profit, he says. For instance, Harishchandrachi had a meagre budget of Rs 2 crore and earned about Rs 3 crore.

While shooting for Harishchandrachi, Nandu watched films of the Japanese actor Toshiro Mifune, who appeared in 16 films of Akira Kurosawa and whom Nandu idolises. “My role in Harishchandrachi was different, but I watched his energy, and I wanted to learn how Mifune got his huge screen presence.” Nandu also doffs his hat to the realist actors Naseeruddin Shah and Om Puri.

The greatest influence on Nandu, however, came from home. In Nandu’s childhood, his father would offer the use of the home to folk balladeers and actors for rehearsals. Nandu’s lawyer father had been active in the Independence movement, and passed his sensibilities on to Nandu. When Nandu stumbled into theatre in college at Aurangabad, he was drawn into the progressive circles of the 80s.

At Government College in Aurangabad city, Nandu once attended a play rehearsal as an uninterested spectator. When the actors screwed up, he felt an irresistible urge to correct them. “I said, ‘Do it this way’. They said, ‘Dare to do it yourself?’ That’s how I got into theatre.”

His college troupe became interested in the plays of Habib Tanvir and also street plays of Badal Sircar. “We discussed the social commitment in these plays,” he recalls. “We began to present our own street plays”—like so many young actors in Maharashtra.

After getting his degree in law, Nandu decided to make the stage his profession and moved to Mumbai. He made like-minded friends. Among other things, he landed a role with Naseeruddin Shah and Pankaj Kapur in Goethe’s tragic play Faust.

The Amol Palekar-directed Bangarwadi followed, with eight major films to come. He also did small parts in Hindi movies, before a dry patch from 2002 to 2005, when he wasn’t getting meaningful film roles. That was when he got Harishchandrachi Factory. “I couldn’t accept other roles at the time. My heart wasn’t in them. I also didn’t want to get over-exposed to the public. If they had seen me playing someone else, they wouldn’t have accepted me as Phalke.”

Throughout his career, being an activist-actor has meant that Nandu is engaged with social causes. For instance, he runs an online Marathi directory and networking forum of activists. His activism involves speaking his mind even if it makes him controversial.

Recently, he was invited by the Marathi TV channel IBN-Lokmat for a chat on Anna Hazare. The editor Nikhil Wagle was all gung-ho about Hazare, while Nandu was not. “I said, ‘You cannot shove politics aside. That is Anna’s great defeat. He has no political alternative to offer’.” The short-fused Wagle cut Nandu short and did not solicit his opinion again. After the programme, Wagle reportedly asked Nandu, “Who do you think you are?”

As he recalls this, Nandu appears bemused. “Anna Hazare was a medium through which the public vented its rage. After the venting, no one will come out for him. In this way, Hazare will kill other social movements.”

A play on the subject, maybe? For now, he has his hands full with Shivaji Underground… He is planning to take the play to the smaller towns and villages of Maharashtra.