A World Away from Venice

A day before the art biennale, artist Riyas Komu escaped to the hills. Two years ago, his paintings were at the world’s biggest art extravaganza. This year, he just wanted to get away, anywhere but Venice 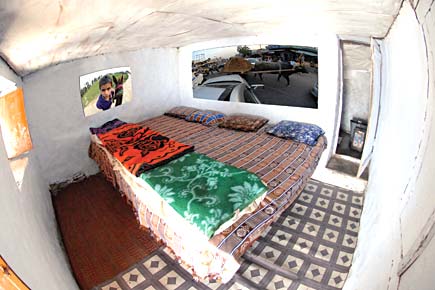 Two years ago, his paintings were at the world’s biggest art fair. This year, Riyas Komu wanted to get away. Anywhere but Venice

Setting off to the hills or being elsewhere may sound corny, but I believe it often serves its purpose if done in the right spirit. Getting away from the usual is simply the oldest antidote to boredom. And I keep rediscovering that John was right in his rhetoric and anger.

Driving down the road from Delhi that snakes its way up the hills, negotiating treacherous curves at night, with a few friends for company, I knew exactly why I was destined to be there. And not in Venice where the biennial art extravaganza kicked off on 7 June, the day before I hit the road to Tunganath in Uttarakhand.

Two years ago, the biennale featured my paintings from the Petro-angel series. And this time, I’d wanted to be there at the massive exhibition titled Making Worlds.

Daniel Birnbaum, the curator of the 53rd edition of the 114-year-old contemporary art festival, did raise expectations by promising to capture what artists from across the world, witnessing some of the most turbulent times in recent history, have to say about the world itself. But the selection process from India is such, thanks to our politicians and art community, that Daniel didn’t succeed in setting up an India pavilion in the biennale. (India has never had an official pavilion in Venice.) Nevertheless, he selected four artists whose works fit in with his concept. The biennale was expected to make a great impact, showcasing the very best works from countries, including India. It has, in the past few years, begun to attract art connoisseurs from across the globe like never before.

It was this that occupied my mind all through the long drive to Chopta, the final halt before the rather tough trek to Tunganath, one of the five main centres of worship set up by Jagatguru Adi Shankaracharya many centuries ago.

Why am I here?  I passed by Hardwar and Rishikesh, and small towns like Devprayag, Rudraprayag and Kund. I was on my way to the hilltop, yet I was elsewhere—a feeling I often celebrate successfully. I did experience the feeling of being elsewhere while in Venice last time, but with the Government being increasingly callous and apathetic to the idea of having a permanent India pavilion at the biennale, I knew I wasn’t going to be there this year.

I had better be in the hills.

The visual affluence of the Italian tourist town does take your breath away. Heritage is alive and history beckons. But that sense of travel as revelation, life changing almost, is different and I could sense it ahead of my trip to the hills, making my way through the poor, neglected  alleys and back roads of north India.

It was an amazing feeling to be elsewhere, far from Venice. No big adventure, just a little trip to get back down on earth, face to face with nature and the stark realities of the contradiction called India. Those dizzying heights, the lack of oxygen, it’s a tough life out there in the hills. The nearest emergency medical care from Chopta is at least 30 km away, thanks once again to the people who rule us. Anyhow, it was a journey out of inertia, lethargy, my comfort zone. Call it what you will, it was life-affirming.

Riyas Komu is a Mumbai-based artist