A Pacifist Ocean of Creation 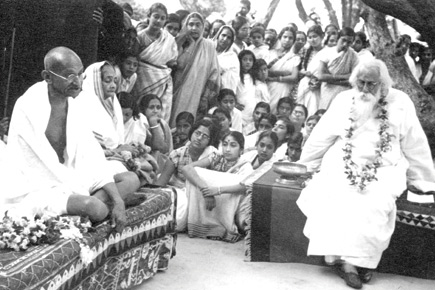 
All his life, veteran artist Devi Prasad has propagated the creation of art that is self-reliant and beautiful in an altruistic way. A multi-faceted artist, his thought and philosophy has manifested itself through painting, pottery and photography for the past 65 years now. Viewing his works is like observing a slice of history, where personalities and ideologies are seen interacting with the events of their time. A strong believer of the Arts and Craft Movement, his creations show an allegiance to the truth of materials, traditional craftsmanship and economic reform.

Prasad’s work has been strongly influenced by Gandhi’s self-reliance or principle of swawalamban and Tagore’s philosophy of finding beauty in art and literature. While Tagore shaped Prasad’s formative years in Santiniketan, his craft matured in Gandhi’s Sevagram where he spent eighteen years as an artist and a teacher, working on the philosophy of Nayi Talim for kids.

Prasad participated in national movements like the Quit India Movement and Vinoba Bhave’s Bhoodan Andolan, after which he left India in 1962 and was at the forefront of anti-war protests in Vietnam and Cuba. In 1967, he presented a ‘Manifesto of Love on Behalf of the Human Race’ at the Peace Convention in Geneva with fellow signatories like Martin Luther King and Thich Nhat Hanh. Prasad came back to India and set up the first pottery studio in Delhi in 1985 where he worked till 2004. His genius lay in creating simple works of art that were utilitarian, inspired by the beauty of the world around us. He speaks to Open about his influences, ideologies and recent exhibition, The Making of a Modern Indian Artist-Craftsman, curated by Naman Ahuja.

Q Tagore’s ideology of seeking beauty in art and Gandhi’s principles of swawalamban are very different philosophies. How easy or difficult was it to strike a balance between the two?

A It is people who perceive Tagore and Gandhi as different, but I believe they are two sides of the same coin. To me, they were both deeply involved in a sense of humanity. Perhaps the only difference is that one was more interested in the beauty and sensibility of it, and the other was more concerned about the economic aspect of things. To me, there is no beauty without truth and no truth without beauty.

Q What was it about swawalamban that inspired you?

A Gandhi’s greatness was that he never went by the literal meaning of words, but by the spirit behind those words. He believed that art should be self-reliant and that the ‘act of making’ will make people self-dependent. This wouldn’t simply instill pride but also respect for labour, and that this will ultimately create jobs locally, stemming migration from villages to cities.

Q You have been a photographer, painter and potter. Which of these best satisfies your creative urge?

A An individual is not just one being inside. He has so many different qualities. We have 51 to 52 kalas that unite the world in the realm of art. Most people can only handle one or two. I was always more interested in painting, but then so many aspects of life come to you when you are doing one thing. Then, you naturally progress to something else. That’s how I ended up doing pottery, photography, bunai (needlework), alpana (floor painting) and carpentry.

Q Tell us about your interest in pacifism.

A I had always noticed that human beings had been fighting against forces that took them away from humanity. I have always been of the belief that one has to treat everything around you, be it trees or wildlife, as a friend. Many thousands of years ago, Buddha realised that all human beings are born equal. But for a long time, people like Buddha remained merely big figures that humanity would look up to but not really follow. Then, slowly, people started thinking ‘why can’t I be like him’. That’s how the spirit of pacifism developed, and that’s how I got interested in it.