‘A Celebration of Failures’

Photographer Samar Jodha talks about his inspiration, his influences, art as advocacy and displaying work at the Venice Biennale 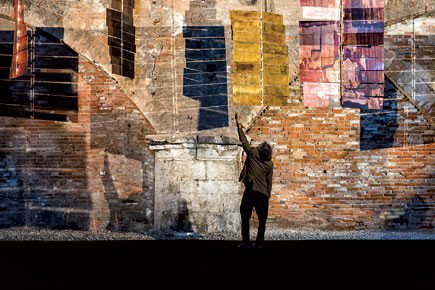 Photographer Samar Jodha talks about his inspiration, his influences, art as advocacy and displaying work at the Venice Biennale


“I think I am a perfect celebration of failures. I was never doing the right thing as an Indian teen in a middle-class family, never could [take that] education-and-career path. The fear of failure and uncertainty laid the foundation of what I do today.” Forty-eight-year-old artist, photographer and documentary filmmaker Samar Jodha wasn’t quite a prodigious talent while growing up. “I was very miserable and a total failure in school,” he says. “We had no artists even in our extended family. I started photography at a time when it was perceived as more of a utilitarian profession (passport/weddings) than an art form.” This was almost two decades ago, when Jodha was living in Africa. Only when the United Nations Industrial Development Organization selected him as a faculty trainee as part of a special programme at the National Institute of Design, did he begin to think of it as a serious career. Today, Jodha has shown work in galleries across the globe. He says that his installation on the Bhopal gas tragedy, Bhopal: A Silent Picture, got over 85,000 visitors in Mumbai in a single week, and was also shown at the London Olympics. He uses art as a tool of advocacy to confront issues of development, human rights and conservation. Jodha is the only Indian artist exhibiting work at the Venice Biennale this year: for his visual dissertation on global culture titled Outpost. He spoke to Open about the things that inspire him and what it takes to create art.

Q Most of your works are comments on the marginalised. What draws you to the topics that you work on?

A I have worked on all kinds of [subjects], including mainstream architecture and heritage. Issues that get overlooked by the mainstream media or larger society are of interest because few others find them worth their time. [One often finds] facets, stories and textures that are really rich and worth seeing or listening to. They also reveal something about [those of] us in more privileged situations. The challenge of putting something so marginal into the mainstream is also an exciting part of the whole process to me.

Q Tell us about the process behind a project. How do you separate yourself from your art?

A For me, my life, my art and my photography are all natural extensions of each other. So I am quite organic. One comes across things in the course of one’s travel or commissioned work and takes it from there. For example, working with fashion in India, which is largely a young people’s thing, I got into creating what became an eight-year-long project about ageing in India. Working on architecture books and magazines fed my interest in habitats and I began a television project in India. A corporate project about the building of the world’s tallest building got me interested in the lives of the migrant workers actually doing the construction work. In many of my recent projects, such as Outpost, I have built upon everyday life to make it a more experiential art that embraces other forms such as installation art, film and soundscapes.

Q Who are some of your favourite artists or photographers? Is there a particular person who has influenced or inspired your work?

A I am inspired by the smallest of things, and sometimes the most inane. A lot of my influences have been music. Growing up as a teen in Africa, a lot of musicians such as Peter Tosh and Bob Marley worked on my subconscious mind. I think it also influenced, to some degree, my political thought process… Other [influences were] artists such as Hieronymus Bosch and Francis Bacon, who I think had such great conflict in their heads and it reflected in their work. But before the so-called ‘artist’ woke up, my initial years as a professional were more [about] trying to be an advertising/fashion photographer.

Q Tell us about your first exhibition and the journey so far.

A I think the first exhibition was while [I was] still at NID. Among the oldest, though unaccredited, works were images from across India that are part of the permanent exhibition Discovery of India in Mumbai. From photography, I have moved on to doing a lot of projects involving other art forms. It has become a more experiential affair, even if harder in terms of the production and logistics. How did you come to be a part of the Venice Biennale?

The Art Biennale in Venice is one of the platforms that an artist always dreams of being part of. As a country with such varied and valuable artistic expressions, it is ironic that, for 110 years, India had no representation there. Two years ago was the first time that India had a pavilion, and then this year that too was discontinued. So with no country or gallery… I am at the Venice Biennale on my own artistic steam.

Q Tell us about Outpost. How long did you work on it and what was the experience like?

A I started work on it during my many trips to the Northeast [over] 2003 to 2012. At the core of my art project is an involvement at a community level, which includes capacity building on issues such as education, rural forestry programmes and the revival of traditional craftsmanship.

My obsession with the nomadic and tribal communities [of] China, Burma and Northeast India began in 2003 when I undertook a road trip from Kunming in South West China through Burma into the Northeast on the famous Stilwell Road built during World War II. Somewhere along [the way] I found and began photographing and filming the vanishing Tai Phake tribe of 1,500 Buddhists originating from Burma.

On one of my many trips to this region, I stumbled upon the fascinating habitats of the miners in the Northeastern borders of India, sandwiched between Bangladesh, Burma and China. The magnificent metal structures that jutted into the lush and uninhabited landscape were an unreal testimony to man’s will to survive. The region, covered with tropical rainforests, has one of the highest recorded rainfalls in the world and was a harsh, [almost] impossible terrain for rudimentary mining.

Q What are you working on next?

A I work or don’t work on several ideas at the same time. My work is really not with an end product (exhibition, publishing) in line. I put in eight years [on the Ageless project] before it became a book. The current project at the Biennale was something I got exposed to in 2003-04 and now it’s finally out as a show. I spend a lot of time on the road and I think the process evolves from that. Some [projects] acquire a life of their own and find fruition as projects that can be shown; others rest in the incubator. Central Asia poses a possibility that I’m exploring at the moment.

Q What do you expect people to take away from your art? Does art as advocacy work?

A As far as art practice goes, especially in the Indian context, I have tried to push boundaries in terms of both form and content. Hopefully, there is something that people can take [away]. Since a lot of the work is coming out of some serious issue, the experience can leave the viewer thinking about the issue. I have been fortunate to partner with people who are able to use the same art for a larger purpose. My project on ageing in India was presented by the United Nations in different parts of India and served the purpose of highlighting an issue in what was Year of the Senior Citizen. Similarly, the Bhopal show was put up by Amnesty International London and served their larger human rights advocacy agenda.

Q What do you think about the art scene in India? Do you see progress in terms of public interest over the years?

A Art has been a close part of our life in India for centuries. Contemporary practice with its own process of collectors, galleries, etcetera, is a relatively recent affair. Art fairs and new galleries are good news but they are riding on corporate support, which leaves them at the mercy of business cycles such as the current downturn.

Q Who are some of your favourites among your peers in India?

A [I’m] not sure how to answer that. I think for me, looking at craftsmen, folk musicians and traditional artists [is a] real inspiration. I liked [Lala] Deen Dayal when I was a student doing pictorial stuff, and I liked ad folks when I was starting in that [business]. But then all this changes and one really wonders what was the great attraction. Someone told me that the best thing that happened to me was that I didn’t suffer art education—and maybe the other sufferings made a serious dent in how I perceive my art.