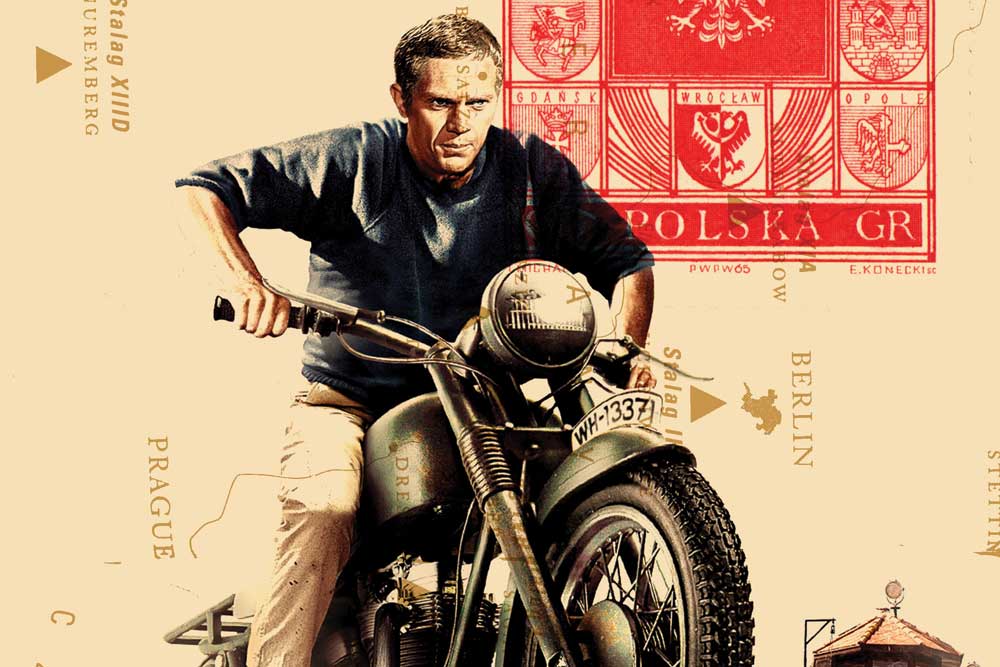 A few years ago when I was on a road trip in a Ferrari California through the Bavarian and Austrian Alps, one of the pieces of trivia that I picked up was that some scenes of The Great Escape (1963) had been shot at the very places that I had driven through. In my mind, the movie was up there with masterpieces such as The Great Dictator (1940), Ben-Hur (1959), Roman Holiday (1953) and the like. The Great Escape is about one of the most audacious escape attempts of World War II. John Sturges, who already had other silver-screen spectacles like Gunfight at the O.K. Corral (1957) and The Magnificent Seven (1960) to his name, directed it. The movie had a star cast that included the top leading men of the 50s and 60s: Steve McQueen, James Garner, James Coburn, Richard Attenborough (who would go on to direct the 1982 Gandhi), Charles Bronson and Donald Pleasence.

When I was back from that road trip, one of the first things I did was to watch The Great Escape again. Visiting the exact place where the scenes of Steve McQueen trying to escape the Germans on a stolen motorcycle were shot had triggered the desire in me, even though I’d seen the movie more than a dozen times before. Though McQueen, who plays Hilts, the ‘Cooler King’, is shown riding a motorcycle hijacked from a German soldier, the bike used in the movie was, ironically, a Triumph TR6 Trophy—one of the greatest British motorcycles of the ’60s. It was painted to look like a German motorbike and that very motorcycle is today on display at Triumph’s factory at Hinckley, UK.

In the movie, Allied airmen hatch an ingenious plan to tunnel out of Stalag Luft III—Prison Camp for Aviators No 3—under the very noses of their German captors. The prisoners dig a 30-ft deep and 360-ft long tunnel, codenamed ‘Harry’, in order to get an unprecedented 250 men out in a single night. The plan fails because the men doing the tunnelling underestimate its length; the exit, instead of in the woods beyond the outer barbed-wire fence, falls short by a few agonising feet, and the game is up after just 76 prisoners manage to escape.

The movie fascinated me so much that I even read the book by Paul Brickhill—one of the prisoners—on which the movie was based. In those days, when I was a teenager, and there was no e-commerce, Amazon or even the internet, I ordered the book through mail order and it took two months to get to me.

Through the book, I learnt that Stalag Luft III was in a little village called Sagan in the province of Lower Silesia in Poland. The location of the camp was chosen deep in the heart of the Nazi territory because it was here that all the troublesome prisoners were housed: men who had attempted to escape many times and were a constant thorn in the side of their captors.

A few weeks after I was back from that Ferrari road trip in Europe, I found myself packing again. This time it was for a visit to Mladá Boleslav, 50 km to the northeast of Prague, to review the new Skoda Yeti. The plain little town, which literally means ‘new castle’, is where Skoda’s manufacturing and assembly plant is based in the Czech Republic. I’d been told that during my visit, I had one day to drive the car to get a feel of it, and that I could take it anywhere in the vicinity.

Now in Europe, that could very well mean anywhere from Paris to Poland. So, a few days later, sitting in the Skoda Yeti, having been told I could go anywhere in the vicinity of Mladá Boleslav, I was sure that it meant all of Eastern Europe. After all, there were no borders anymore under the European Union, and with my Schengen visa, I could drive right across from France to the border of Russia.

Since I had read The Great Escape recently, I remembered that some of the airmen had plans to head south to Czechoslovakia after they’d exited the tunnel. I felt the first quivers of excitement start. I pulled up at a service station and ran into the café with my laptop. Fortunately, there was some free Wi-Fi floating about which I latched on to.

A quick Google search for ‘Stalag Luft III’ took me to the old prison camp’s Wikipedia page. In those days, Wikipedia would include the geographical co-ordinates of a place on the top right corner of the page. So I fed the co-ordinates into my Garmin GPS and it told me that the camp was a mere 205 km away. It was an absolute no brainer; I didn’t even give it a moment’s thought about whether I should or shouldn’t do it; I tapped on the ‘Go’ tab, pulled out of the service station and followed directions.

The route took me north from Mladá Boleslav towards the border, crossing over into Poland at a town called Zawidów. I then drove for a bit on the E40—the autobahn that connects Dresden and Warsaw—and finally pulled off on to the Polish regional road 296 towards Stalag Luft III.

The final leg of the drive made me feel as if I were in a 1950s Cold War spy movie. The area still had a distinct drab communist feel to it, complete with nondescript grey boxy apartment blocks and old ladies in scarves dragging shopping carts behind them. Everything looked ‘Eastern Bloc’. The buildings had no character whatsoever. So different from the vibrant architecture of the villages that I had driven through in the Czech Republic. This is because Poland was reduced to rubble during WWII, and most of it was rebuilt to utilitarian Soviet specifications.

I was driving well under the speed limit, fascinated by this town that seemed to be stuck in an era gone by half-a-century ago, when a police car started flashing its lights behind me, indicating that I should pull up to the side of the road. Thankfully, the policemen spoke a little English, and after a routine check of my licence and registration, they told me that I didn’t have a vignette on my windscreen. This is a sticker that I should have bought when I crossed over from the Czech Republic to Poland. One of them pointed to the sticker I had on the windscreen and said it was for the Czech Republic, and I needed to pay a certain tax at a service station and get a similar one for Poland. Then they asked me why I was in a part of Poland that didn’t usually see many tourists, and I explained to them that I was on my way to Stalag Luft III in ••aga••. They didn’t seem to understand, so I pulled out my laptop where I had the movie stored and showed them a bit of it. This got one of them mighty excited. He burst into an animated conversation with the other, gesticulating excitedly and making actions that pantomime riding a motorcycle. I couldn’t understand what they were saying, but I was pretty sure what it was about. I moved forward to the motorcycle scene, and both their eyes lit up. Now they understood where I was heading. It seemed that the movie was quite a hit in Poland too; in fact, one of them brought out a blank DVD from the patrol car and asked me to burn the movie on to the disc for them. So we drove to a newsagent nearby, where they bought me a cup of coffee and the vignette too as a sign of gratitude while I copied the movie for them.

Żagań, called Sagan during the German occupation, is a small village in Poland, an innocuous background to one of the most audacious escape attempts of WWII. The GPS took me right to the doorstep of the museum that has been built to showcase the incident. The caretaker told me that as the years grow long, visitors have changed from smart middle-aged men in their army uniforms to veterans in their eighties and nineties. He said that the uniforms might not fit as sharply as they did before, but you cannot miss the gleam of pride that sparkles in their watery eyes.

The museum was absolutely worth the drive. All the stuff I’d read about in the book and seen in the movie was stocked there: the ingenious pump the prisoners fabricated to keep the deep and long tunnel ventilated; the sandbags they wore under their pants to dispose of the sand from the tunnel. There were also interesting tidbits of information about how they stole electric wire and managed to plug it into the camp’s power supply to give their tunnel electric lighting. On display was crockery with the embossed Wehrmacht logo of an eagle holding the swastika in its talons. I was told that even today when they dig around the area, crockery and cutlery often turn up. A 20-minute film showed footage from the time when the camp was operational during the war.

The actual site of the camp is one kilometre from the museum. It was blown up by Germans in the face of the Russian advance, and in the 70 years since, the forest has reclaimed the spot. Now, all one can see are the concrete foundations of the structures that the camp consisted of, but signs indicate where everything stood. The length of the tunnel has been paved, and standing at the entrance of ‘Harry’, I got goosebumps. It was here that 200 men gathered to make a bid for freedom on a fateful night between March 24th and 25th, 1944. I walked along the length of the tunnel and saw how agonisingly short it fell of the woods. If they had tunneled 30 ft more, the exit would have been hidden by the trees, making it possible for more people to escape.

Of the 76 that made it out that night, three managed to get back to England, 73 recaptured; and 50 executed on the direct orders of Hitler. Infuriated by the great escape, Hitler initially wanted every recaptured prisoner, the soldiers on duty that night, the security officer of Stalag Luft III and the architect who designed the camp, Commandant von Lindeiner, executed as an example. His generals managed to convince him out of it, but he ordered Himmler, the chief of the Gestapo, to make an example of 50 of the most troublesome prisoners.

Today memorials are scattered all over the camp’s site, including one to the 50 executed by the Gestapo. The old caretaker of the museum told me that when the Iron Curtain was pulled aside in the early ’90s and Poland became more accessible, many Stalag Luft III veterans came to visit. Walking around the camp, they would often crumple and break down, overcome with emotion.

“What we see today is just a forest with scattered ruins of concrete foundations, but for these men, this place brings back memories of a time of despair and gloom when the only ray of hope shone 30 ft underground,” he said.

• Though Stalag Luft III is in Żagań, Poland, most of The Great Escape was shot in Bavaria, Germany.

• There are really no places to stay and the best option would be to hire a car and drive here.

• Plan to spend about 2 hours at the site.

On the Road from Istanbul to Antalya