Decision bloopers this World Cup have stirred a lively debate on the adoption of technical aids. Because human errors in refereeing are making the difference between victory and defeat quite often. 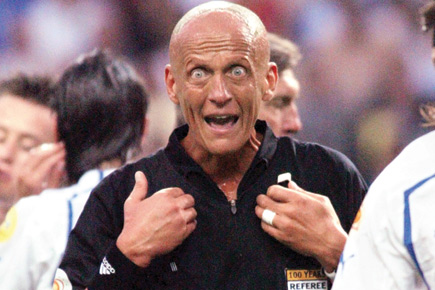 Decision bloopers this World Cup have stirred a lively debate on the adoption of technical aids.


For all its global popularity and wealth generated, football’s governance is rather folksy. In comparison with the Federation of International Football Associations (Fifa), cricket’s much maligned governing body, the ICC, would appear a tech-savvy democracy. This Fifa World Cup, that impression is reinforced by the way two second round knock-out games were decided.

Two refereeing howlers had a decisive impact on the score line if not final outcome in the England versus Germany and Argentina versus Mexico matches. But for those on the wrong end of the result, the bad calls become the big excuse. For England’s coach Fabio Capello, Frank Lampard’s uncounted equaliser—which hit the crossbar, dropped and bounced in the goal—was the moment that turned the match against them. If you asked German fans old enough to remember the 1966 final, Uruguayan referee Jorge Larrionda’s blatant mistake last week was poetic justice; most Germans believe that 44 years ago, the referee had robbed them of victory by granting Geoff Hurst a goal though the ball clearly hadn’t crossed the German goal line. German fans themselves would have been far less stoic if they’d been knocked out in the first round after the trigger-happy Spanish referee Alberto Undiano sent off their striker Miroslav Klose in under 30 minutes of the game against Serbia for a couple of mild tackles.

It’s fairly usual for managers in the English Premier League to berate referees for smaller crimes, week after week. Sir Alex Ferguson of Manchester United, when his team lose, groans about inadequate ‘stoppage time’ after the stipulated 90 minutes. Archrival Arsene Wenger, at most times an affable and erudite football philosopher, directs his verbal scuds at referees for not “protecting” his skillful players who get clubbed down by troglodytes. No World Cup is complete without a contentious decision or two.

Does poor adherence to the rulebook have a greater impact on the outcome of football matches than other sports? Indians who watched the 2007 Sydney Test between India and Australia would disagree, but somehow poor umpiring decisions in cricket don’t grate as much. Maybe there’s so much international cricket going on that decisions even out in the long run. England, after all, have faced Germany on a competitive football pitch on just four occasions in a decade.

Think about it. Failing to spot an inside edge in an LBW decision is slightly less embarrassing than what the English referee Graham Poll did in the 2006 World Cup match between Australia and Croatia. Poll failed to send off Josip Simunic, a Croatian, after booking him for two yellow card offences (his luck ran out only with the third yellow card). It was such a foul-up that Poll sought retirement the very next day.

For Italian and Spanish supporters, the 2002 World Cup in Japan and Korea has been the worst in living memory. In one quarterfinal, Spain scored two perfectly legitimate goals which were disallowed against Korea, the hosts, and they lost the game in a penalty shoot-out. The Italians (authors of the compendium How To Hoodwink The Ref) suffered likewise against Japan; it nearly snapped diplomatic ties between the two countries. Japanese players in the Italian Serie A even faced expulsion.

Bad decisions are part of sporting lore. The English would argue that there’s been no injustice worse than the referee’s failure to spot the ‘Hand of God’. The Irish would have liked to try France at the International Court of Justice for Thierry Henry’s hand ball goal in the qualifying round. In a 1982 semi-final against Platini’s France, the German goalkeeper Schumacher attacked Patrick Battison with such ferocity that he could’ve been booked for attempted murder. Even as Battison lay unconscious with a broken jaw, the referee awarded a goal kick.

Living with human error, you could argue, is one of the charms of following sport. That sport must mirror the vagaries of life, and not exist in an antiseptic environment of in-camera replays and infrared sensors is a nice idea, but offers little consolation to the loser.

Football is perhaps the world’s only widely followed sport that refuses any form of technological help for its officials. Cricket by comparison is at the cutting edge; the third umpire, who started off in 1992 as an adjudicator for split second run out and stumping decisions, now has an expanded role with the umpiring decision referral system (UDRS). Snickometer, hotspot, stump cams and Hawkeye today are part and parcel of the game. Tennis, hockey and rugby use the camera and Hawkeye to decide on-line calls. The simplest thing Fifa could do is post an official right behind the goalpost net to decide if the ball crossed the line or not. There have been fancier suggestions, such as implanting a chip in the ball that would offer digital evidence of the ball’s crossing the line.

After the loss against Germany, even the UK Prime Minister David Cameron joined the technology debate by calling for video referrals while attending the G8 Summit. But Fifa boss Sepp Blatter has said that there won’t be any such thing so long as he is around, and in all likelihood, will be re-elected for another four-year term. If you are an amateur sportsman, Fifa’s idealism makes street sense. Every streetside player doesn’t have access to technology, and so respect for human judgment needs to be maintained. It shouldn’t matter if it’s the World Cup or some alley game in a slum.

Also, sport wouldn’t be much fun without heated arguments on perceived injustice. Sport offers that rare field of activity with millions and millions of witnesses—and common denominator clarity on what’s fair and what’s not.