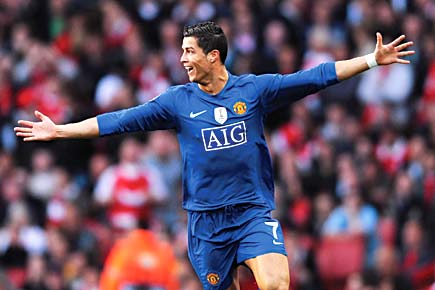 
It was around six in the evening on 10 June. David Gill, chief executive of Manchester United, prepared to go to Geneva for a Fifa meeting. But something happened. A fax rolled out. It would ensure that far away, in Los Angeles, waiters in the MyHouse nightclub would receive generous tips from a young man from Portugal.

The fax was a formal offer from Real Madrid to buy Cristiano Ronaldo. United had no inkling that a bid of this nature would be made that day. Gill got in touch with United manager Sir Alex Ferguson, and Ronaldo’s representatives. Then, the Glazer family, who own Manchester United, were informed. The Glazers told Ferguson that it was his call to make. Last December, a livid Ferguson (when is he not livid?) had said he wouldn’t sell “that mob (Real Madrid) a virus”. But now, after thinking for a couple of hours, no doubt chewing gum, he gave Gill the go-ahead to sell Ronaldo. The price was an unprecedented £80 million (over Rs 630 crore).

In Los Angeles, Ronaldo celebrated the transfer in the MyHouse club with Paris Hilton. They ordered Cristal champagne, costing £650 per bottle (Rs 51,000). Tabloids reported that he spent £15,000 (Rs 12 lakh) that evening.

Football transfers are complex. Ronaldo may be the central figure in the contract but he will get no part of the £80 million purse. That money would go to Manchester United. It is a return on their investment.
Real Madrid is now investing in Ronaldo. He will help them earn a steady stream of revenue through merchandise and other means. Then, one day, it is possible that Real will be able to sell him to someone else for a good price. One part of club football is maths.

Ronaldo will draw a salary from Real Madrid. It is believed to be £11 million a year (Rs 87 crore). This makes him the world’s highest paid footballer, taking him past Zlatan Ibrahimovic of Inter Milan, who makes Rs 79 crore a year. Ronaldo drew about Rs 50 crore a year at Manchester United. His agent, Jorge Mendes, would get 5 per cent of Ronaldo’s enhanced salary.

It had been reported that Ronaldo would get 10 per cent of the transfer fee. But this practice is no longer common and is employed only when the transaction is small.

The deal is noteworthy for two reasons. It was struck in the middle of one of the worst economic recessions in recent history. Secondly, Real took a loan of £66.5 million from Caja Madrid Bank for it. But why?

The answer lies in the habits and ambitions of Florentino Perez, the construction tycoon and president of Real Madrid. Madrid last won the Champions League in 2002. This is not acceptable to their fans, 80,000 of whom fill the terraces of the Santiago Bernabeu Stadium every night the team plays an important match. What makes Real’s failure harder to swallow is the success of Barcelona, their bitter rivals. They won the Champions League twice in the recent past, in 2006 and 2009. Perez is a big-spending man with big goals. He was responsible in signing up the original ‘Galacticos’ starting in 2000. At the time, Perez spent £135.7 million (over Rs 1,000 crore) on Luis Figo, Zinedine Zidane, Ronaldo (the Brazilian striker) and David Beckham. Now, in his new term as president, which began in June, he decided to open his wallet again. So far, he has spent £184.6 million on acquiring the Portuguese winger Ronaldo, Brazilian midfielder Kaka, French striker Karim Benzema and Spanish defender Raul Albiol.

Spain is not immune to the economic drought but Real and Perez have the reserves and the connections to continue shopping. According to the Deloitte Football Money League, an analysis of the financial performance of clubs, Real remains the world’s richest club. It earned £289.6 million (over Rs 2,200 crore) in 2007-08. Perez’s net worth is £1 billion (Rs 8,000 crore). He is the chairman and principal shareholder of Grupo ACS, one of the continent’s major construction companies.

The investments will be recovered through a telecast deal, ticket sales and merchandise. Real Madrid is to earn £135 million (over Rs 1,000 crore) a year from their television deal with MediaPro, and about £60 million (Rs 470 crore) in gate receipts. With high-profile acquisitions like Ronaldo and Kaka (or ‘Ku-kka’ as you’d have to say to impress a Brazilian), Real will not find it hard to sell T-shirts. The day of Ronaldo’s unveiling, 2,000 T-shirts, each selling for about Rs 5,800, were gone in two hours. “It is better to buy Ronaldo for €92 million than pay €20 million for a player of slightly less calibre and profile,” a club official said.

Italy’s Serie A is rated as a tough league. Pace and hardiness are the features of the English League. Spain’s La Liga is known for flair. The setting will be right for Ronaldo, who revels in the creative stuff, the stepovers and back-heels, no-look passes and body feints. But he marries these with strong fundamentals, which makes him a complete footballer. His goals reflect his range, be it the stunning back-heeled strike against Aston Villa last year, the header against Chelsea in the 2008 Champions League final, or the right-footer from 40 yards against Porto this year. Several aspects of his game are distinctive. For example, while taking a free kick, he faces the goal and stands with feet apart. Though he was a dud in this year’s Champions League final against Barcelona, at his best, Cristiano Ronaldo is poetry in gelled hair. Yes, he is the Kevin Pietersen of football, a man too much in love with himself. Yes, he pushes the rules of gamesmanship with his diving. But as a footballer he is special. There are not many who at 24 have won the domestic and Champions Leagues, and been crowned the World Footballer of the Year.

Ronaldo is not known for his modesty. He said that he deserved his price. Many would agree. In his grave, Willie Groves, who in 1893 went from West Bromvich Albion to Aston Villa for £100—a record then—may want to disagree.