Steel Beneath the Silk

Grit won it for Federer, beauty came along for the ride 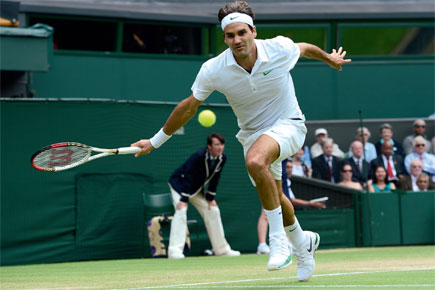 Grit won it for Federer, beauty came along for the ride


On Sunday afternoon, 8 July, Roger Federer and Andy Murray were at the net on Centre Court at the All England Club, going through the formalities of commencing the 2012 Wimbledon final. Also present at the spot were Enric Molina, chair umpire for the match, and Elijah Ortiz-Herrera, an 11-year-old boy suffering from leukemia, given the honour of conducting the toss. Before Molina gave Elijah the go-ahead to toss the coin, he asked the players if they had any questions. They didn’t. But at the end of the match, Murray might have wanted to ask something, if not of Molina then those scripting his fate. “What more can I do to beat Roger Federer in a Grand Slam final?”

It was Murray’s third defeat in three major finals to Federer, even though Murray was the one who started strong in the match and seemed on course to end Britain’s 76-year wait for a homegrown Wimbledon champion. For nearly two sets, Murray’s serves and strokes had the fury of a Sean Connery outburst. A stat popped up on television screens at 4-4 in the second set: Murray was slamming his groundstrokes at an average speed of 73 mph, 4 mph faster than his tournament average. He was fast around the court, his 25-year-old legs had more raw speed than his nearly 31 opponent’s. Federer, on the other hand, seemed tense, shanking the ball on quite a few occasions, and often just about getting his racquet on Murray’s 130 mph-plus serves.

Yet, when it all ended, the man slipping and tumbling and ranting was Murray. Federer fell only once, and that in celebration. Federer got one small opportunity at the fag end of the second set. One brick in the Murray wall had come a bit loose. He grabbed it with one hand— playing a heart-stopping singlehanded backhand drop volley. The set was his. It was the turning point. The 20-minute game in the third set when Federer broke Murray after ten deuces was a huge moment too. But winning the second set was more critical in the overall context of the match.

And thus, Federer won another Slam. No one believed he had it in him anymore. His serve, once the bedrock of his game, wasn’t as reliable. And his one-handed backhand, though more effective than earlier, continued to be exploited by his opponents. There was the age factor. All his main opponents were much younger than him. Rafael Nadal was almost five years younger, Djokovic and Murray almost six. There was the backhand. Nadal, Djokovic and Murray hit a much heavier, more secure two-handed backhand. There was no apparent weakness in their game. Nor was Federer a classic serve-and-volleyer in the Pete Sampras mould so he could rely on a different gameplan against his key rivals. The only way to beat them was to serve big and battle it out from the baseline. The only way to climb Everest was from the North Face.

That Federer chose to do so reveals his toughness, which is often not given due credit. Federer’s principle identity is that of an artist, not a warrior. He’s more Mark Waugh than Steve. His comportment on court and off adds to the image. He plays with ridiculous ease. He hardly sweats. He shows very little expression, except for the occasional, deep “C’mon!” On the other hand, Nadal, Djokovic and, in particular, Murray initiate animated dialogue with their box.

Off court, his high celebrity has necessitated certain things. Till 2006, Mirka, his wife, answered media emails herself. Not anymore. Federer himself has learnt the tricks of voice modulation and body language, with which he can subtly erect a wall between himself and the rest of the world. But by nature he’s easygoing and not given to prima donna airs. In 2002, he negotiated a deal with Nike himself, without an agent. On Christmas day in 2006, Federer came to India on a Unicef visit to visit tsunami-hit areas in Cudda- lore, Tamil Nadu. Despite a long flight, he and Mirka embarked on the tour without much rest or nourishment, first visiting district collector Gagandeep Singh Bedi’s residence for an audio-visual presentation on relief measures, then the Panchayat Union Middle School in the rebuilt Thazhanguda village and then the Cuddalore Orphanage. He was just 25, and he could have enjoyed Christmas anywhere in the world. That he kept his commitment said something about him, even considering that one of the motives of the visit could have been image-building. Federer also has a goofy side to him that is in stark contrast to his inscrutable game face. The formality of a television interview often gives him the laughs and there are several videos on YouTube of Federer breaking into laughter, necessitating a retake. In changing rooms, he is known to parody opera singers, and when asked to pipe down, sing even louder. At times, his non-confrontational instincts disappoint people. As president of the player’s council, peers expect him to ask tougher questions of the administration, something Federer isn’t very comfortable doing. This prompted Nadal to once say, in the context of players having to play a packed schedule, “For him (Federer), it’s good to say nothing. Everything positive. ‘It’s all well and good for me, I look like a gentleman,’ and the rest can burn themselves.”

But while Federer may prefer to not be in a conflict, he has proved he can roll up his sleeves and get his hands bloody when the occasion demands it. The first highlight of his men’s career, his upset of the great Sampras at Wimbledon in 2001, was a tough five-setter (this writer was fortunate enough to cover the tournament for The Times of India, as well as Federer’s first Wimbledon title in 2003). Federer’s whole career, actually, is almost as much about the ability to hang in there as it is about swanning about the court playing beautiful tennis. He failed to make the quarters in his first seven Grand Slams. That translates into nearly two barren years. For a big prospect, who had won junior Wimbledon, it must have been humbling. Some might have derailed. But Federer kept at it. It’s poetic justice that the player who was an early underachiever at Slams now has 17 Grand Slam trophies.

Resilience defines the latter years of Federer’s career even more. In the early 80s, when John McEnroe exploded on the scene and defeated Björn Borg in three of the four major finals they played (Wimbledon and the US Open 1980 and 81), Borg couldn’t handle it. Jaded as it is and now faced with a young rival he couldn’t unlock, Borg walked away from the game. Nearly 25 years later, a similar story was unfolding in the game. A young challenger—Nadal—was depriving a reigning king—Federer—of his sleep and his glories. But Federer did not walk away. Not even after the shattering fiveset loss in their classic at Wimbledon in 2008. Federer had 11 Slams at that point. His status as one of the greats was secure. He could have walked away to stop Nadal inflicting further blows to his legacy. But he didn’t. If Federer was as weak mentally as Nadal fans sometimes say, he wouldn’t have embraced this challenge. And even though he has a lopsided record against Nadal, their matches have always been close. After this year’s Australian Open semifinal between the two, well-known tennis writer Jon Wertheim shared an interesting stat on the CNN-Sports Illustrated website. At that point, the head-to-head record between Federer and Nadal stood convincingly in Nadal’s favour at 18-9. But his lead in the overall points comparison was slender. After 27 matches, Nadal had won 2,851 points, Federer 2,779.

Going into Wimbledon 2012, Federer was without a Slam for two-and-a-half years. Time seemed to have passed him by. While you can stay lean for decades, reflexes do slow down post-30. Even if you are Roger Federer. But Federer insisted that he could do it, so what if the rest of the world thought his insistence meant he was in denial. Two years ago, he hired Paul Annacone, the former pro who also coached Sampras. Annacone made Federer a more aggressive player, especially from the backhand flank. There was a phase when Federer would only chip or block from the backhand. But post-Annacone, he goes over the ball with increasing confidence. It gives him variety. Earlier, opponents would only worry about his slice, which made the ball skid and stay low on grass. But now they also have to watch out for the hard backhand driven with topspin.

Federer’s triumph at Wimbledon was one of grit more than shotmaking brilliance. Yes, there were times when he hit those magical shots. The most audacious moment of the final was a backhand he converted into a forehand drop shot even as he was moving backwards in the fourth game of the third set. But what won him the title, what got him past Julien Benneteau (who was two points shy of beating him in the third round) or Djokovic or Murray, was his rock-solid serving and never-say-die court coverage. He ran around the court, getting the ball back till his opponent made a mistake or he got an opening. One can safely presume that Federer rates this Wimbledon win among his top four Slam titles (the other three being Wimbledon 2006 and 2007, when he beat Nadal in the finals, and the 2009 French Open, his only triumph on the clay of Paris).

Federer’s win at Wimbledon has resulted in fresh rounds of the GOAT (Greatest of All Time) debate. For some, Rod Laver remains the best. The gentlemanly Australian left-hander won two calendar Grand Slams (all four majors in one year). And while the total number of majors he won is a relatively modest 11, it must be remembered that Laver, for a long time, did not play Grand Slams as he had opted to turn professional. The 60s was a time when tennis was divided into the professional and amateur categories. The professionals couldn’t play the Slams. Had Laver not missed out on five years of Slams, he might well have had 20 major wins. The next candidate for GOATness, of course, is Federer. The clinching factors for Federer are these: his record number of major titles, his longevity and the beauty of his game. It is possible his stats will get bettered. Nadal, only 26 and already with 11 majors, certainly has a chance. And knowing how competitive he is, Nadal must be determined to get the record. Some already say Nadal is the GOAT as he has beaten Federer in the course of winning seven of his 11 major titles. But while Federer’s stats may get surpassed, the way he plays is impossible to emulate. Like it or not, beauty goes a long way.