From a discard five years ago, Zaheer Khan is now a lynchpin of India’s cricketing ambitions. His is the greatest turnaround story of Indian cricket 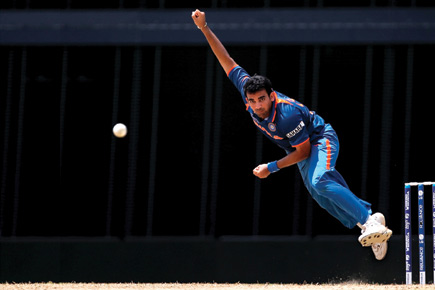 From a discard five years ago, Zaheer Khan is now a lynchpin of India’s cricketing ambitions. His is the greatest turnaround story of Indian cricket


Next week, it will be 47 years since Bob Dylan released The Times They Are a-Changin. Intended as an anthem for the times, it also had some sage advice for those in the fourth estate: Come writers and critics, Who prophesise with your pen… don’t speak too soon, For the wheel’s still in spin, And there’s no tellin’ who that it’s namin’.

There must be a few dozen folk who were in a press box at Karachi’s National Stadium five years ago that wish they’d listened. The final Test of the series had started with an Irfan Pathan hat-trick and ended with India being walloped by 341 runs. Zaheer Khan, seen then as an experienced foil for the exciting Pathan, took three wickets in the game, but was as helpless as the next man when it came to containing Pakistan’s rampant batsmen in the second innings.

Such was the magnitude of that thrashing that it was pretty apparent that Zaheer would be one of those to pay a price. Already, there had been plenty of talk of the extra weight around his gut, the lack of athleticism in the field and a lackadaisical attitude that didn’t sit well with those who’d given him half a decade to establish himself as the spearhead of India’s attack in the new millennium.

By that stage, Zaheer had played 42 Tests, taking 121 wickets at 36.34. His strike-rate of a wicket every 65.7 balls was not as good as Kapil Dev’s (63.9) or Javagal Srinath’s (64), and there had been only three five-wicket hauls. His figures would have been decent for a support bowler, but for a man usually handed the new ball, they just weren’t good enough.

So, when he was jettisoned for the home series against England and the subsequent tour of the Caribbean, there was no great fuss. After all, at the end of the Karachi Test, Pathan had 81 wickets from 21 Tests, and a strike-rate (53.2) that was up there with the all-time greats. There had also been the Mohammad Asif factor to consider. That game had effectively been settled by two wonderful spells from the loose-limbed medium-pacer, whose control and beguiling skills—swing, seam, cut, changes of pace, he had it all—had cruelly exposed the Indian attack’s limitations.

Half a decade on, those who wrote of Asif and Pathan as the future, and wrote off Zaheer, don’t know where to look. Pathan hasn’t played a Test for India in nearly three years and isn’t part of the World Cup squad. Asif, when not smoking what the Rastas call “we righteous weed” and serving suspensions for drug use, took 106 wickets in 23 Tests before the News of the World’s sting operation involving Mazhar Majeed threw up his name. With the International Cricket Council about to take a decision on the case, it is not clear at all whether he will ever play again.

And Zaheer? Ignored by the selectors in the summer of 2006, he took himself off to England and second-division anonymity with Worcestershire at New Road. He shed the lard, put on some muscle and made short work of modest opposition, taking 78 wickets. The catalyst for the change was Graham Dilley, mostly remembered for his famous partnership with Ian Botham in the Headingley Test of 1981, but a handy swing bowler himself. Dilley was the bowling consultant and he and Steve Rhodes, the coach, shortened Zaheer’s run-up and ensured that the prominent leap as he appro-ached the crease didn’t upset his balance.

An Indian audience first saw the changes when the domestic season started. Such was his impact over the first few games that the selectors, having lost faith in Pathan’s waning skills, had no option but to bring him back for the tour of South Africa. ‘He was no longer one-dimensional, for he had learnt the art of bringing the ball back into the right-hander too,’ wrote Aakash Chopra recently on Cricinfo. ‘He also sacrificed a bit of pace for accuracy and went on to prove that speed, at times, is an extremely overrated virtue. If you can pitch the ball in the right areas, ask the right questions consistently, you really don’t need the extra yard of pace to trouble the batsman. Not that pace doesn’t come handy, but you can also do without it.’

The county stint undoubtedly helped Zaheer hone his skills, but more importantly, it brought about a change in attitude. He was still no athlete, but he had sussed out what worked best for him. On a rainy afternoon in Cape Town, training inside the University’s indoor nets, he fronted up to the media and told us: “I was missing playing for India and after being dropped, I sat down and analysed what had gone wrong.”

He would expand on that theme the following year, after superb spells at Trent Bridge inspired India’s first series win in England since 1986. “You had to innovate, use your thinking power,” he told the Wisden Almanack after he was named one of the Cricketers of the Year. “There were some experiments that I couldn’t carry out when playing for India,” he said. “I carried them out in county cricket.”

Since those laboratory days, Zaheer’s transformation has been remarkable. In 35 Tests since he came back into the fold in December 2006, he has picked up 146 wickets at 28.13. The strike-rate of 51.3 can be compared to someone like Dennis Lillee (52), whose stints at the MRF Pace Foundation in Chennai influenced him in his younger years.

In 2010, Zaheer took his game to another level. For a man who played only one of his nine Tests outside the Subcontinent, 47 wickets at 21.97 was a gasp-inducing return. His strike-rate of 39.8 was bettered only by Dale Steyn (39) and Steven Finn (39.7). Without him at Centurion, India’s attack looked park-cricket class, albeit on a pitch that eased once the sun started shining. At Durban, with Zaheer back, they bowled South Africa out for 131 and 215.

Talk to his teammates and you’ll hear one recurring theme. They don’t just appreciate what Zaheer does with the ball. They realise how vital his experience is when Sreesanth or Ishant Sharma are bowling. He’s the voice of reason and the quiet word in the ear to ensure that they don’t get carried away.

It’s not only those on his side, though, that look to learn from him. After his role in England retaining the Ashes, James Anderson, another hugely improved swing bowler, said: “Last time we were in India, Zaheer was hiding the ball when it was reversing, so I picked that up from him and tried to develop it to suit me.”

He’s 32 now, and fitness permitting, 2011 will be the year that sees him become only the second Indian pace bowler after Kapil to get to 300 wickets. On the opening day of the Cape Town Test, as India bowled under overcast skies, a home journalist said: “It won’t matter if the sun comes out tomorrow. Steyn could get swing on the moon.” His colleague thought for a moment and then said: “So could Zaheer.”

Each time we attempt to bury Pathan or any other young talent that has lost its way, we’d do well to remember Zaheer. From discard to leader of the pack. Perhaps the best India has ever had.