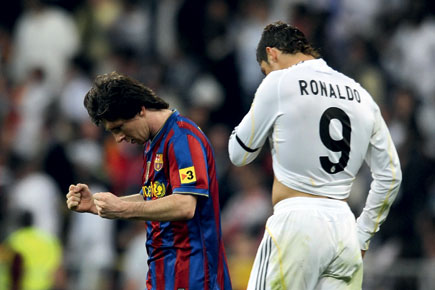 
Now that the European football season has ended, it’s safe to ask the question: Messi or Ronaldo? Both failed to take their respective teams into the final of the UEFA Champions League. Either could be the face of our era—lighting up stadiums, television screens and imaginations across the world. The luxury of choosing between them is extreme. There are five stages of this debate: hyperbole, statistics, achievement, personality and indecision.

Evaluating individuals in a team sport is highly contentious, more so in football. The arguments—and the results—are tilted in Leo Messi’s favour right now. He has just broken Gerd Muller’s 39-year-old record of scoring 67 goals in a season for a club, going up to 72. He has won more titles (18 to Ronaldo’s 9), and has been ‘world footballer of the year’ for three years running. He has scored 252 goals in 328 club appearances; Ronaldo 269 out of 467. And Messi is only 24, more than two years younger than Ronaldo.

The question doing the rounds is whether Messi is the greatest footballer of all time. That question is not asked about Cristiano Ronaldo (or CR7, after his jersey number). CR7 fans typically argue that he is the more complete player and leaves more of a mark than Messi, who is helpless without the midfield genius of Xavi Hernandez and Andres Iniesta. That he has not shone for Argentina the way he has for FC Barcelona.

Neither Messi nor Ronaldo has come even close to World Cup glory. But that is irrelevant today, as the world’s showcase football competition is the UEFA Champions League, not the World Cup. Most players tire out playing for their clubs, and national teams seldom benefit from their best players at their best. The dominant club teams today are Messi’s Barcelona and Ronaldo’s Real Madrid.

Messi and Ronaldo are the posterboys of the Spanish top league, lending it charisma that does not need a marketing blitz or cheerleaders. For just reporting their average day in office guarantees excitement and good copy. That they both play in Spain, the site of the world’s best football today, is no mere coincidence.

Which explains why the flowering of Ronaldo required a move to Real Madrid in Spain from Manchester United in England, where he was already a massive presence. In his early years in England, the Portuguese star was infamous for showboating (his father had named him after Ronald Reagan), playing a selfish game, never performing on the big stage, and letting his extraordinary technique get undermined by needless stepovers and extravagance.

He has matured since his southward move—from a prodigy to a match winner. At Madrid, he passes the ball more often and has started assisting team mates into scoring positions. He was the fastest to score 100 goals in Spain and has averaged 49 goals in his three seasons there.

Like Messi, CR7 is an inverted winger; a right-footed player, he prefers to play on the left flank. When it comes to outrunning defenders, Ronaldo can accelerate and run around the best of them.

Tall and muscular, his physical strength makes him a great bet in 50-50 ball situations, and he is clearly superior to Messi in the air—one of Real Madrid’s rare victories against Barcelona in recent years came last season, when Ronaldo jumped over the defenders to head in the goal that bagged the King’s Cup for Madrid. Although Messi did head a goal in the Champions League final of 2009, he is easily overpowered and outreached in the air.

Ronaldo also has one of the meanest freekicks in the business. His trademark knuckleball is struck with remarkable power, dipping and swerving unpredictably. His lunge forward to prevent any spin on the football is trademark. But he also wastes several deadball chances, shooting with great power high over the crossbar. Madrid still let him take most freekicks from scoring positions, whereas Xavi takes most of the freekicks for Barcelona. Messi gets a chance only on occasion when a left foot is needed; even in open play, he favours his left foot. Ronaldo, however, is double-footed, getting power and accuracy from both feet, though he prefers his right.

The sight of Ronaldo on the ball is a testosterone rush, inspiring awe. Ask an average football enthusiast about the kind of goal-scoring machine they would like to engineer, and their blueprint will trace CR7. His only misfortune is that he plays in the time of Lionel Messi. In the same league.

For Messi is the kind of player nobody could have imagined, let alone engineered. He arrived at FC Barcelona from Argentina as a 13-year-old on a football scholarship, seeking treatment for his growth hormone disorder. At 5’7” he is about a foot shorter than several defenders. He poses no threat in the air and often doesn’t even jump for an airborne ball. His left-footed freekick bends around the wall quite non-violently. He is a brisk runner, but his strides are short. And you could argue he wastes opportunities by (over)passing the ball to others in intricate geometric puzzles.

What makes him a contender for the greatest player of all time? One word: Barcelona.

Because while individualist Ronaldo would have been Ronaldo in any team, only Barcelona could have created a Messi. The emphasis the club places on technical excellence and grooming—and the participatory dance of 11 players on the pitch—has made Messi unprecedented. He is the best dribbler, possibly of all time. What marks him out is how much he deceives with such little movement. There are no CR7-patented flashy stepovers; just subtlety upon rarefied subtlety of movement, which throws off the closest of defenders.

His short frame means he has a low centre of gravity. It takes him milliseconds to turn, and he keeps twisting and turning, deceiving deception by deception. He stays composed in the midst of several defenders, as if refusing to acknowledge their presence or vertical advantage. And he runs at them.

He just keeps running, turning at speeds at which others would keel over. His sudden bursts of acceleration and equally sudden stops regularly throw off defenders, making him virtually impossible to track. He routinely picks up the ball around the halfway line and runs right through the middle past dumbstruck defenders, which drew early comparisons with Diego Maradona. His close control of the ball is the best since Ronaldinho Gaucho. Anybody who gets as close as he does to defenders—and jumps and runs around them—runs a high risk of injury. Yet Messi has stayed injury-free, a tribute to his fitness.

About 20 years ago, defenders would have scythed him down with vicious tackles. In today’s attack-friendly football, it means an instant yellow card and a not too distant red card. Worse, a penalty, if it’s anywhere inside the box. The hallmark of Messi’s goalscoring, though, is his casual dink over or past the goalkeeper, a striking contrast to Ronaldo’s slam dunks.

While Ronaldo is often seen flailing his arms in the middle of the pitch, decrying team mates for not passing the ball to him, Messi simply drops deep to combine and pass the ball, moving forward in concert. This makes it difficult to mark him. Since he plays in the best ball-passing side of all time, his triangular passing is expectedly of a high order. For a centreforward—he moved to the centre from his original position of an inverted winger, a left-footer on the right flank—he provides more assists than several top-flight creative midfielders. He has 101 so far. He has always had a deadly last pass to play somebody into a scoring position.

His team play, however, is also Messi’s big criticism: that he is a shadow of himself without the passing abilities of his illustrious team mates, while Ronaldo has performed in different teams. There is no way to settle this without Messi playing for another club, which seems unlikely since he has announced that he would like to retire from Barcelona. (The joke goes that Messi hooks up with a woman and goes to a hotel; when the woman returns from the bathroom, there are two more men sitting on the bed. Messi tells her he doesn’t score without Xavi and Iniesta).

This has more to do with the character of the clubs they play for. Real Madrid is a bastion of individualism and ambition. The club consistently buys the best players in the world at their peak, with hardly any homegrown talent in the first 11. CR7 is at home plying his business here as the most expensive player in the world. Barcelona’s totaalvoetball heritage means Messi is comfortable submitting to the collective.

Ronaldo’s supermodel looks and brash statements make for exciting copy, and there is a touch of envy even as he gets booed in an away fixture. Messi, meanwhile, charms with his gentleman-cadet demeanour and understated bearing. His pupil-dilating runs guarantee an adrenaline overdose in the spectator, followed by an oxytocin high. The beauty of Messi lies in the success of such vulnerability.

They are both spectacular. Whom you pick says something about you.