Doddering about, even getting booted out of the World Cup in round one: What has gone wrong with the men from the Continent? 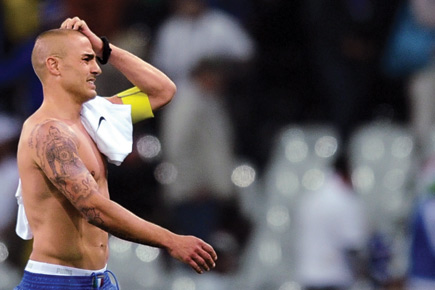 Doddering about, even getting booted out of the World Cup in round one: What has gone wrong with the men from the Continent?


The French existentialist philosopher Jean-Paul Sartre said that in football everything is complicated by the presence of the other team. His compatriots in particular and traditional European superpowers in general have conclusively proved him wrong. France, especially, have been so diabolical that they would lose a match even in the absence of an opponent. By the manner in which France, England and reigning world champions Italy have performed, you really wonder if Europe deserves the lion’s share of World Cup slots in the final tournament that Fifa allots it.

Even Spain, current European champions, ranked second in the world and pre-tournament odds-on favourites, kicked off their campaign in South Africa with a loss to lowly Switzerland, and recovered a bit to register an under-emphatic 2-0 win over Honduras.

You could argue that by and large, results on the football pitch mirror the world’s economic state of affairs. Europe stands on creaking, aged legs, and seems bereft of ideas and imagination; Africa, despite its natural riches, continues to flounder due to lack of cohesion and strategic direction. Just as long reigning dictators call the shots in large parts of the continent, its football teams are also heavily dependent on a handful of talismanic players like Didier Drogba and Samuel Eto’o, who ply their trade in Europe’s clubs for the most part. Of the six African countries that are in this year’s World Cup, only Ghana stand a realistic chance of making it to the knock-out stages. The broader Asia-Pacific region is resurgent by comparison, resourceful, and constantly improving. While South Korea have booked a place in the knock-out round of 16, Japan and Australia have a decent chance, while New Zealand and North Korea haven’t really been humiliated as once expected. The point is, there are superpowers no longer—Argentina look the closest to being one, but they aren’t there yet. It’s the most equal world ever.

For neutral football fans, Europe’s misery is comical and somewhat pleasurable. Let’s begin with the Vaudevillian party that’s currently masquerading as the French national football team in South Africa. France were the luckiest entrants into the World Cup, having knocked out Ireland in the qualifying play-off with a goal so dubious that it would make that goal of Maradona seem perfectly legit. The Irish are understandably thrilled by France’s early exit, but justice delayed is justice denied, they think. It is hard today to find a man more senile than France’s coach Raymond Domenech. He led them to a spunky runners-up finish in 2006, but it now emerges that disillusioned veterans like Zinedine Zidane were actually running the show back then by royally ignoring the coach’s interventions.

This time round, France’s squad has no scorer of the artful netless goal (hits the top-bar and dips in), nor anyone being sent off for a bullish head-butt. In short, this is a team without any legends who can play exactly as they so wish. The result of all the coach’s bullying, then, is a full blown revolt in the French team.

After the humiliating loss to Mexico, captain Patrice Evra said that he felt France was a “small” nation. At half time, Chelsea star Nicholas Anelka openly abused Domenech, and was sent home on the next available plane. On the training ground, there was more Gallic drama, captured on video, where players came to blows with their fitness trainer, went on strike, and almost threatened to pull out of the final group game against South Africa. They took the field only after the country’s President Nicolas Sarkozy ordered them to. Only Domenech, whose belief in astrology is such that he doesn’t pick Scorpio players, could have pulverised a team of such talent as Franck Ribery and Florent Malouda.

The country’s Le Figaro daily summed up the performance succinctly: ‘It is collective suicide… the French team has heaped ridicule on itself in front of the whole world yesterday at Knysna [the training ground]. The ‘field of dreams’ became the set of a living nightmare. It was almost hallucinatory. This is a psychodrama that will go down in the history of the World Cup. The French team has been reduced to ashes.’ Le Parisien was scathing: ‘To have the worst football team at the World Cup was already unbearable. To also have the most stupid is intolerable … The mutiny at Knysna will forever remain the Waterloo of French football.’ Even India, one of the worst football teams in the world, could perhaps have beaten Les Miserables, with the most exciting thing about their field appearance being their national anthem.

Under normal circumstances, such events could be enough to spark off wild revelry in pubs across the Channel. But given England’s own crisis, there wasn’t much for the English to gloat over. They were staring at a mutiny within their own ranks, as central defender John Terry questioned the teams’ $10 million-a-year Italian coach Fabio Capello’s tactics in a press conference. Perpetual chokers in quarterfinal penalty shootouts, England’s chances of progress are only slightly better than France’s.

Before the tournament, investment bank Goldman Sach’s numerical analysis concluded that England would win the Cup this year, ending a 44-year trophy drought. That must seem a cruel joke for English supporters now. After the 1-1 draw with the US, Englishmen consoled themselves by pinning the poor result down to a goalkeeping howler more than American pluck. But the goalless draw against Algeria has left English fans numb. Wayne Rooney is perhaps the only world class player in a team of over-rated, overpaid middlers—so went the booing from the English stands. The rowdies, of course, had less delicate ways to express themselves.

Anyhow, even London’s rah-rah tabloids wear a sullen look now; The Guardian, a regular daily, wrote off England’s chances after the Algeria draw: ‘No spark, no spirit, no hope.’ As Open goes to press, England face a must-win game against Slovenia, a team that incidentally had the best defence record of all European teams in the qualifying games.

In Italy, the sense of despair isn’t quite so stark, given the low expectations. Most Italian fans would’ve been happy if the 2006 champs were to make a dignified exit (read: an honourable penalty shootout loss in the second round). But they were held to a draw by rank minnows New Zealand, who by most accounts are the weakest team ever to participate in a World Cup. Their team, ranked No 80 in the world, even has amateur footballers with day jobs at banks and post offices.

The Italians had such a poor run soon after their 2006 success against France that they quickly reinstalled coach Marcello Lippi. This was the man who’d guided them to glory four years ago, when their crisscross two-goal victory in the semi-final against Germany was hailed by the irrationally exuberant as a work of Michelangelo on the field.

The Italians’ big problem is that their team is virtually unchanged since then, with the talent pool drying up faster than you can say ‘Azzuri’. Captain Fabio Cannavro, now 37, ought to have retired four years ago, feel Italian fans. But resource-strapped Lippi has no better options. At the best of times, Italians are not the most prolific goal scorers. Their attritional Catanaccio (the lock) brand of football attempts to wear down opponents for 90 minutes, and then sneak in a lone counter-attacking goal if possible—or else let the match roll into penalties. This year, with proven strikers Franceso Totti and Fillipo Inzaghi retired, they struggle to even get anywhere near the penalty box area. They could be on an early flight home along with France.

That the World Cup could end in tears for such fancied European teams is still something football fans are stunned by. But if you peel away the coats of glamour, there has been something rotten at the core of European football for a while. Europe’s big domestic football leagues, flush with TV and parvenu owners’ money, had become too fat for their own good. For clubs and associations, quick buck making had obscured the need to nurture local talent.

The biggest shock for Europe could come in Germany’s exit. The continent’s most decorated footballing country has never failed to reach the knockout stages. But there’s plenty un-German about this team. Breaking the stereotype, they play free-flowing attacking football, often at the cost of their defence. Who would’ve ever thought Germany could miss a penalty kick? When Lukas Podolski, a Poland-born German, missed from the spot against Serbia, not many could remember the last time it happened. You’d have to go back to 1974, when the current Bayern Munich general manager Uli Hoeness missed a World Cup penalty (though they still won).

The current team flattered themselves with four goals against Australia in their opening match. But they promptly lost to Serbia. Bad refereeing decisions played a part, but rarely has a team as mighty as Germany had its fate determined by Ghana. But then again, expectations in Germany weren’t all that high because of the relative inexperience of the squad (average age: 25), and captain Michael Ballack’s last minute injury.

During the recent financial crisis, Europe mostly looked to Germany for bailouts. On the football pitch, all of them seem to need one.