He has a British passport, but plays for India. Watch out, for India may finally find a fencing champion in Gaurav Gupta. 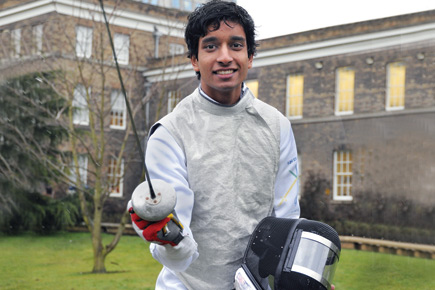 He has a British passport, but plays for India. India may finally find a fencing champion in Gaurav Gupta.


Gaurav Gupta, a first-year economics student at Leicester University in England, is the latest sensation in Indian fencing. And he is now aiming for the 2012 London Olympics.

The 18-year-old became India’s number one fencer in 2009, though he fell to the second spot in the Indian Men’s Senior Foil Championships in Salem this year. “I am happy about the success I’m having in my fencing, but think of this as a start and not the end,” says Gaurav, “I want to further my skills to one day be an Olympian and to put India on the map in the fencing arena.”

Though his parents, Rakesh and Meena Gupta, are originally from Agra in Uttar Pradesh, England has been home to Gaurav all his life. His parents immigrated to the country early on, with his father now running an IT securities company.

It was at age 12 that the fencing bug hit Gaurav. “There was a fencing club in my school. One day I went there out of curiosity. I was fascinated by the swords and the speed and agility of the fencers. I joined the club,” he recounts.In no time, Gaurav had mastered the basics of the sport. Tall for his age—he is a six footer now, and growing—and fast with his footwork, he soon became the star pupil of the coach, Trevor Langford. Noticing Gaurav’s talent, Langford started taking special interest in him, eventually convincing him to enter local competitions.

Gaurav went on a winning spree over the next couple of years. By this time, his coach had steered him deeper into the sport. A time came when Gaurav had to decide on which form of fencing to specialise in.

Modern fencing, as a sport, is quite distant from the original combative art of the previous centuries, when it was used more for duelling. Today, there are three weapons a player can choose from and specialise in. The first is the foil, a light and flexible weapon, a one-handed sword designed for thrusting. The second is the epee, a heavier, thrusting weapon. The third is the sabre, a cutting weapon, since, unlike the previous two, its sides too are sharp.

Gaurav went for the first. “The sword is very light and you get points when you touch your opponent with the tip of the foil. Since it’s so light, you have to be extremely fast and agile in both your offence and defence tactics. I thought this weapon was more challenging.”

The sport requires the fencer to spend four to six hours in the gym every day. Apart from the usual exercises, Gaurav takes special lessons to strengthen his leg muscles to improve footwork, hands for agile movements of the sword, and arms for better dodging tactics.

All this training means a strict, protein-heavy diet. “Sometimes I miss out on the normal eats on campus, but then I am mollified thinking I am doing this for fencing better.”

Gaurav recently shifted to Salle Boston, one of London’s leading fencing clubs. His coach at the club is Tomek Walicki, a specialist in foil who is also the UK fencing coach. It was as his student that Gaurav took part in the Indian senior championships.

“I got an offer from the Indian fencing authorities to be part of the team. I said yes. My roots are Indian. It was fun travelling in the country, meeting my kind of people, eating my kind of food. The fellow players in the team went out of their way to not single me out as an outsider.”

However, Gaurav still has a long way to go. He will have to take part in the European and World Championships. In India, while fencing has begun attracting serious attention only recently, the country stands nowhere in the world rankings, which is crowded by European countries, the Far East and the US. “I will try my best to put India on the map,” promises Gaurav.

However, he still needs to get used to juggling his studies with fencing. “The university is really supportive. The last time I had to take part in a championship, I missed out on my exams. I was grateful I was allowed to re-sit the exams. In future, I will see how to handle both the education and the sport without one affecting the other.”

The university, though, seems to have immense confidence in him. “The very qualities that will bring Gaurav an outstanding degree—hard work, dedication, tenacity and mental toughness—will bring him further success within world fencing,” says Colin Hide, director of sport at the University of Leicester.

Why did he choose economics for his Bachelor’s course? “It has been my favourite subject since school. Also, I am interested in investment banking as a career and I am laying a basis for that. I will peak out in fencing when I cross the 30s. Then what do I do? I need to have a qualification to get a job in the field of my choice.”

That’s future planning for this future champion. Any regrets so far? His face creases into a youthful smile. “I don’t get time to watch Hindi films. I have yet to see 3 Idiots.”