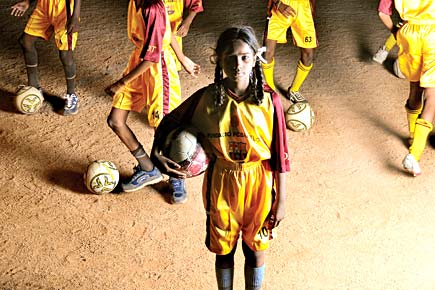 
IT COULD’VE BEEN a scene on TV: a wide-eyed No 10 jersey player strikes a goal, and the teammate in jersey No 14 goes nuts in euphoria. Except that it’s not on TV, and the audience is not an ‘ole ole’ chanting sea of maroon. The striker here is Bhavani S, a shy 14-year-old wearing Messi’s Barcelona jersey, and the jubilant teammate is Nagarjuna J, who’s in Henri’s. These youngsters are part of a unique experiment by the Spanish football club (aka Barca) in a backward stretch of Andhra Pradesh. It’s an initiative that hopes to spot future Messis, Henris, Marquets and other La Liga champs, and if that’s hoping for too much, intends putting their heads to use in cracking exams with as much skill as scoring goals.

About 24 km from Anantpur, Bathlapalli is an arid place, but one where the passion for sports is matched by a thirst for knowledge. This drives its schoolkids twice a day to Foundacio Football Club Barcelona, which has set up camp here in partnership with Rural Development Trust (RDT), an NGO working in the fields of women’s empowerment, rehabilitation, medical assistance, vocational training and sports development (it runs hockey and cricket academies in Anantpur). “We are very well known back home in Spain through the Father Vincent Foundation,” says Moncho Ferrer, associate programme director, RDT, “That is how Barca got in touch with us.”

Plans for a three-year project were drawn up (extendable by another three years), for which the Spanish football club gave ¤80,000, and together they now run a school with the participation of 101 children in the 13–15 age group. Drawn from surrounding areas, the kids attend classes and get sports coaching. They’re taught English, mathematics and computers, apart from football, hockey, kho-kho and kabaddi. “The 51 girls and 50 boys come here early in the morning for two hours, attend regular government school afterwards and come back in the evening for another two hours,” says T Ravindranath, who runs the school.

The school has been running for a year now, though it was only recently inaugurated formally by Juan Laporta, Barca’s president. So impressed was the club’s boss that he immediately okayed the funding of another centre at Atmakur, which would be the eleventh such Barca initiative to help identify and produce sports champions while also educating them.

For the kids, attendance is an exciting prospect. Located next to a sprawling RDT Hospital, the project has its own campus with a school building and large playing field, and the students also get to watch Barca live on TV whenever they play league matches. Every morning and evening, they change into yellow and maroon jerseys and shorts, attend classes or play games as and when the schedule dictates, Monday through Saturday.

For parents, though, it has been a case of slow acceptance, even appreciation. “Initially, many parents were not happy with this,” says Noor Mohammed, the football and hockey coach. “We faced a lot of problems as the girls’ parents were against their wearing shorts. Later, after seeing the change in their wards, they are now asking us what they can do to help their children improve.”

Adds a lady teacher, “The girls have travelled a lot and are now outspoken. They were shy and reserved when they first came here.”

That the extra education could prove useful has clearly been noticed. ‘The action of today becomes destiny of tomorrow’ says a message on a wall in the maths classroom, where a group of boys squat on the floor, busy with their algebra. Suresh, the maths teacher, is confident of turning out top performers from among the group by the time they take their board examinations two years from now.

Srinivas, a 14-year-old, is amazed with his own progress. Ask him how he’s faring, and he stands to attention and says without hesitation that he used to get just nine out of 25 at school in maths. Now he gets 21. Ramanjaneyulu, a slim well-built lad, cites the reason—teachers here take the trouble to clarify their doubts. Anudeep, his classmate, seconds that. The teaching here is not like in regular school, where they are scared to ask any questions.

Some of the parents are surprised that their kids could suddenly turn so bright. “My child speaks English and knows how to operate a computer,” says a proud parent with an air of disbelief.

And what about sporting talent? Aided by modern sports coaching and kits, the girls’ football team has already made the district proud. “Seven girls and four boys made it to the respective district junior teams from this school,” says Ravindranath.

Ferrer, having grown up in Anantpur playing football with the locals, speaks Telugu with the same fluency as Spanish. “Atla kaadu, itla kottu,” (Not like that, kick this way) he tells students in Telugu, pointing to his foot. “Our aim is to equip students to compete at the local and national level,” he says, “We are surprised that in less than a year, many of our students have made it in all the four disciplines.” Ole to that.

If even one kid makes it big, Barca could count on an entire ocean of maroon fans in India.