Another World Cup, another 175

Virender Sehwag had warned this would be a revenge match. And that intent was announced in the first ball bowled. 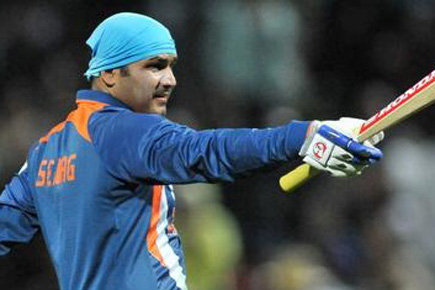 Virender Sehwag had warned this would be a revenge match. And that intent was announced in the first ball bowled.


Virender Sehwag had warned this would be a revenge match. And that intent was announced in the first ball bowled.

If Virender Sehwag were a boxer, he would move his feet. He would chase the man around the ring, look for an opening and deliver the punch. Clinging to the opponent or evading him by dancing around the combat zone would not be his style.

This approach helped Sehwag conquer Bangladesh’s competent left-arm spin and register a score that has a karmic connection with Indian World Cup campaigns—175. It gave his Delhi teammate, Virat Kohli, a pressure-free environment in which to hit his first World Cup century. This, in turn, helped India build a giant 370 for four. And all this insured them against defeat despite a courageous response from the Bangladesh batsmen, especially the openers Imrul Kayes and Tamim Iqbal and the captain Shakib-al Hassan. It must be said, however, that dew hampered the Indian bowlers. The dew was the reason why Bangladesh chose to bowl after winning the toss.

Sehwag, the man of the match, hit the first ball of the match for a boundary, slashing Shafiul Islam through cover for four in the throbbing Sher-e-Bangla stadium in Mirpur. It was akin to firing a bullet in the ceiling upon entering a bar. “My intentions, gentlemen, are clear. Now let me loot.”

Except that Bangladesh did not. Not for a while at least. There was a brief phase from over no. 4 to 9 when the medium pace of Rubel Hossain and the left-arm spin of Abdur Razzaq challenged Sehwag and Sachin Tendulkar. The tussle was engrossing, one of the few occasions when ball and bat seemed to have equal rights. Hossain used the bouncer to neutralise Sehwag. Razzaq kept his wits about him. Sehwag would charge, Razzaq would drop it short. Sehwag would make room for an inside-out hit, Razzaq would cramp him with a leg stump line. There were times when Sehwag still went for the shot. But initially, the timing was elusive and the shot would not have distance on it.

Shakib too kept things interesting. He came on in the 12th over, just after his spectacular run-out of Tendulkar. The crowd and the team had both received a boost and Shakib brought that spirit to his spell. He is not a graceful bowler. He appears to dart them in at an angle and his left leg kicks out in ungainly fashion. But he is effective. With Ruben’s exception, he was Bangladesh’s second most economical bowler, conceding 61 from ten and taking a wicket.

Sehwag, however, had been itching for revenge against Bangladesh for the humiliation they subjected India to in the 2007 World Cup. And once he found his range on the slow gray pitch, Bangladesh lost strength. Gradually, it became a farce. The ball became a frequent flier, repeatedly enjoying aerial journeys. Kohli joined in the plunder. The Bangladeshi crowds, which greeted Sehwag’s first boundary with silence, now did not have any option but to applaud Indian successes. The brief challenge presented by Razzaq, Rubel and Shakib had ended. At one stage in the match, the crowds, in their desperation, would even give a loud cheer to dot balls. But you cannot pretend that dot balls are wickets for long.

The only batting related worry India might have taken from this match is the running coordination between Sehwag and Sachin Tendulkar. Not a big problem. Not something to call ‘The Wolf’, as fans of ‘Pulp Fiction’ might say. Just something Dhoni and Kirsten might have a quick word with Sehwag and Sachin about. Or maybe the two would discuss it among themselves.

There was confusion on two occasions. The first time, Sehwag backed up too much and Sachin agitatedly sent him back, swatting the air with his hand. In fact, he seemed a bit put off. It was, after all, the start of India’s opening World Cup match and they were keyed up.

The second time, the misunderstanding was fatal. Sachin pushed to wide mid-on and took off for a single. Sehwag, busy looking at the ball, did not see Sachin. Shakib, having dived left to stop the ball, threw it to the wicketkeeper. The bails fell down and broke their crown, and Sachin came tumbling after, in a manner of speaking.

India would be worried more about their fast bowling. S Sreesanth went for far too many, even though the Bangladesh openers rode their luck on occasion. Zaheer was economical but could not strike the early blows. Munaf Patel, however, survived the test of nerves. In the World Cup’s first match, despite the dew factor and against an opponent that was in the hunt for a while, he kept his head, got rid of the dangerous openers and finished with four for 48.

In a way, the match was reminiscent of the 2003 World Cup final. India batted well then. But Australia had put up an unreachable target. This time, though, India were on the winning side. The hope is they continue to be so till the end of the tournament.