A Weight off His Back

With Sachin Tendulkar retiring after his 200th Test, chief selector Sandeep Patil can move on to other things on his agenda 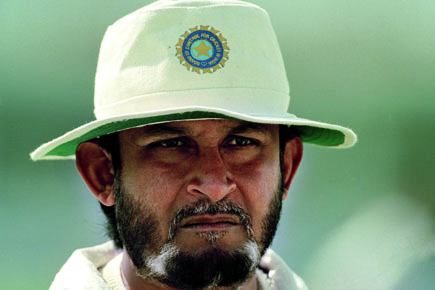 With Sachin Tendulkar retiring after his 200th Test, chief selector Sandeep Patil can move on to other things on his agenda


Beyond Boundaries is a sports tourism and promotion firm founded by Jaideep Sinh Parmar. In 2009, it organised a hit-and-giggle veterans cricket match on the Jungfrau mountain in the Alps. The six-a-side contest was between India, led by Kapil Dev, and an international team captained by Alvin Kallicharran of the West Indies. Sandeep Patil, the former India batsman known for his big hitting and now Indian cricket’s chief selector, was also in the team. Almost all the players, including Patil, were accompanied by their wives.

Twenty-five years earlier, Patil and his wife Deepa had spent their honeymoon amidst the same snowy slopes in and around Interlaken. Patil, whose first marriage ended early, rates his union with Deepa as the elixir of his life. And in Switzerland, he was overcome with joy at celebrating their milestone in a place where their journey began a quarter century ago. Understandably, he recorded many portions of the trip on his video camera. In fact, he started shooting immediately after the tour party landed in Zurich and boarded the private bus to Interlaken. Camera rolling, Patil walked down the aisle of the bus, asking people to introduce themselves.

The last few months, the cameras were on Patil. In a country of a billion cricket-judging Simon Cowells, being chief selector is a difficult job. What made Patil’s tenure tougher was it involved the delicate matter of deciding the future of a man called Sachin Ramesh Tendulkar. In December 2012, just months after taking over as chief selector, it was Patil who reportedly broached the subject of Tendulkar’s future with the legend, resulting in his abrupt, oddly prosaic retirement from One-day cricket. The 2015 World Cup is high on the selectors’ and team’s agenda and Tendulkar could not realistically be a part of 2015. A few days ago, Patil was back in the news. Media reports hinted Tendulkar had been told that after his 200th Test he would be picked only on form. Patil denied the story. On Thursday, Tendulkar announced his decision to retire himself. But Patil has very much been in the frame of this debate. In that sense he was very much in the hot seat.

Former India captain Dilip Vengsarkar knows what it is like to be in this seat, having been a chief selector himself. In a conversation with Open about the Tendulkar situation a few days prior to his retirement, he said, “He is India’s greatest player. He will know it when he doesn’t have it anymore, when half volleys go in the hands of fielders. Players of his stature take pride in performance and won’t hang around unless they know they can still play.”

But Vengsarkar also said, “Selectors need to have courage of conviction, and players need to be given breaks at the right time, not too early, not too late.” About Patil, he said, “Sandeep is doing well. I think he has sent the message that players have to be on their toes. Reputations matter, but form and fitness do too.”

Another man who has played at the top level and been chief selector is Kiran More. Asked about the pressures of a chief selectors job, the former Indian wicket-keeper says, “There is pressure when you are about to drop a player, not so much when you are selecting one. Having played cricket, you know how painful it is for a player to be dropped.” More says he too wouldn’t have dropped a player like Tendulkar or Dravid. “They’ve done so much for the country, I’d leave the decision to them. And Sachin will know when it is time to go. He is a very honest person.” Of Patil, More said, “Sandeep is good with his colleagues (committee members Vikram Rathore, Rajinder Hans, Saba Karim and Roger Binny). He has no ego issues. It is a good group. It’s not about the individual but the whole committee.”

Everywhere in Indian cricket, the topic of conversation in the run-up to Tendulkar’s 200th Test was his future. Last Friday evening, cricket enthusiast and promoter Sachin Bajaj organized a function in the wood-panelled Cooch Behar Room of the Cricket Club of India to remember two recently departed, old-school cricket people – the administrator Jaywant Lele and the journalist Dicky Rutnagur. Many present at the gathering believed that if Tendulkar did well against the West Indies, he’d continue. Milind Rege, the former Mumbai player and the state’s former selection chairman, was at the function. He said, “Sandeep is a likable but firm guy. And as a selector he is on the lookout for players who can make an impact. I’m sure when the time is right Sachin and Sandeep will have a chat about his future. But you have to leave the decision to Sachin.” Now, that decision has been made.

Patil’s actions and statements had shown he was not afraid to drop big names. Earlier this year, he left out Virender Sehwag and Gautam Gambhir from the team. He and the selection committee also picked the find of this season – Shikhar Dhawan. And about Tendulkar he once told the Times of India, “"If Sachin wants to bat like this (defensively), then he should quit. But if he wants to bat like the Sachin of old, then he should keep playing. And please put this on record.”

Tall and rugged, Sandeep Patil is one of the interesting figures in Indian cricket. The son of Madhusudan Patil, a versatile sportsman who played first-class cricket and badminton, Sandeep Patil was an explosive middle-order batsman and medium-pacer who quickly paid his dues in local, University and domestic cricket and grabbed an India cap. He did not take long to prove himself at the highest level either. By the time he played his fifth Test, he was a star, scoring an epic 174 against Australia in Adelaide after being struck by a Len Pascoe bouncer in the previous Test in Sydney. He is also famous for smashing England’s Bob Willis for 24 runs in an over. Patil’s most glorious moment as a cricketer was when India won the 1983 World Cup. In the low-scoring final against the West Indies, Patil contributed a valuable 27, the second highest for India after K Srikkanth’s 38.

Patil’s stern, lion-in-autumn visage may not suggest so, but in his playing days he was also an incorrigible prankster. In a column in The Hindustan Times a few years ago, he wrote how he enjoyed pulling the leg of Yashpal Sharma (another former selector) on the 1982-83 tour of Pakistan. Entertainment options were few for players at that time, and hotels did not even have a TV in every room. The only option was watching movies on the VCR in the TV room. Yashpal was obsessed with the film Kranti, an wouldn’t allow any other film to be played. Patil hid the Kranti cassette, to which Yashpal responded by confiscating the VCR. Among other things, he also ordered eight breakfasts under Yashpal’s name. He relented only when Yashpal begged him to stop.

Off the field, Patil rivalled Ravi Shastri as the team’s sex symbol. He wrote a book, ‘Sandy Storm’, modeled and produced a record. He acted in a film, Kabhi Ajnabi The, opposite Poonam Dhillon. Syed Kirmani played the role of villain, and in a cameo role was Clive Lloyd (don’t ask). The distractions and bloated sense of self, however, compromised Patil’s cricket career. Even today, despite his flashy living – he drives a cherry red Mercedes sports car and enjoys the farmhouse lifestyle – his eyes sometimes have a faraway look that suggest regret over not living up to his potential as a cricketer. In an interview to Cricinfo.com on his 50th birthday, he admitted as much. “I think I wasted the talent which I had,” he said. “I let down so many people and that is why I'm in a better position today, as a coach, to understand and explain the problems to youngsters what I went through and the mistakes I made.” (At that time he was the Chairman of the National Cricket Academy in Bangalore.) He has also said in the past that he finds the game boring to watch.

And yet, he loves the game deeply. This comes through in ways small or big. On a bus ride in Switzerland the late Pradeep Vijayakar of The Times of India and I were talking about the career of the late Mansur Ali Khan Pataudi, who was also on the trip. “When did Pataudi retire?” I asked Pradeep. “1976,” came the answer from behind. It was Patil, speaking even as he continued looking out of his window. In 2009, a function was held at Mumbai’s Rang Sharda auditorium to celebrate the 60th birthdays of Sunil Gavaskar and GR Viswanath. Amitabh Bachchan and Tendulkar were also in attendance. Patil spoke via video conference, and the awe he felt towards Gavaskar and Viswanath was palpable. “Seeing my name on the same list as Gavaskar and Vishwanath, I’d think something was wrong somewhere,” he said. He also revealed Viswanath’s unique way of freshening up for an innings after a nap in the dressing room. “Vishy would dab a handkerchief soaked in cold milk on his eyes and would be ready to walk out to the middle.” Patil’s cricketing acumen also reflects in the various roles he has held in the game. After his playing days, he managed India, coached Kenya to the World Cup semifinals, was the head of the NCA and is now chief selector. But the job, as said above, has its pressures. When I texted him to ask if I could call him with some questions for this article, he replied, ‘Pl dnt. Thnx.’