Before the interviews, Nixon’s team believed that Frost could be outwitted 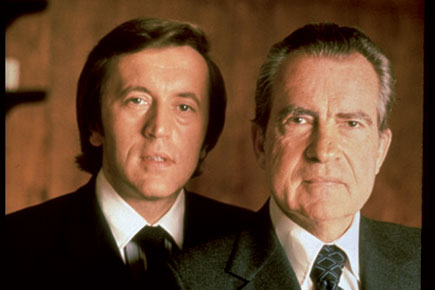 Before the interviews, Nixon’s team believed that Frost could be outwitted


The British journalist David Frost who passed away recently was most famous for his series of interviews with former US President Richard Nixon. The on-camera interviews, 12 in all, were conducted about three years after Nixon’s resignation over Watergate and Frost got the former President to apologise for the first time to his countrymen.

It began on 23 March 1977 and concluded four weeks later. Known to hate the media, Nixon had not granted an in-depth interview since his resignation. It is believed that he spoke to Frost because he was in need of money. A fee of $600,000 and a 20 per cent share of any profits were negotiated by Nixon’s team. Frost had recently had a New York-based talk show cancelled and he believed he could pull off a strong success with the Nixon interviews. Contrary to Frost’s beliefs, American news networks were initially hesitant to fund the interviews, and Frost had to fund the project himself till he found investors.

Before the interviews, Frost wasn’t regarded as a tough enough journalist to deal with Nixon. Nixon’s team believed that Frost could be easily outwitted and Nixon would get a terrific opportunity to fix his reputation. As expected, in the initial interviews, Frost struggled to needle the former President. In the latter days, however, he secured an upper hand. During their sparring, Nixon delivered what is considered one of his most infamous quotes: “Well, when the President does it, that means it is not illegal.” The most memorable part occurred when Frost got Nixon to apologise. Nixon said, “I’m sorry. I let down my friends. I let down the country.”

The interviews were broadcast in four parts across the US and a few other countries and shattered US television records. They were later adapted into a play and film.