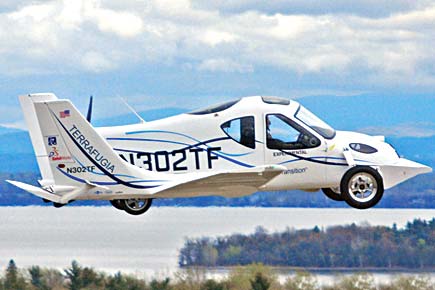 “Pigs won’t fly, but someday cars will,” I said, and put the newspaper down. I turned to the woman in the seat next to me


“Pigs won’t fly, but someday cars will,” I said, and put the newspaper down. I turned to the woman in the seat next to me. She turned to her book in order to try and studiously avoid me.

Shamelessly undeterred, I adventured, “An American company, Terrafugia Transition, based near Boston, is set to unveil the dual-purpose car-cum-plane vehicle called The Flying Car as early as 2011. The two-seater vehicle can let you fly if you wish to avoid congested city traffic.

“If you want to drive on the road, just touch the road. The vehicle will fold up its wings in 30 seconds and transform itself into a car. Very 007, eh?”
Thoroughly shattered at the lack of interest shown by my neighbour in this piece of news, I retreated and proceeded to pleasure myself (with the rest of the news piece).

It can travel up to 725 km in the air at a speed of more than 115 km per hour. It is fuelled by gasoline, it has front wheel drive on the road and a propeller for flight. Its wings folded, it can be parked in your car-sized garage.

Now for the inevitable dampener. Its initial cost is expected to be around $200,000 (nearly Rs 1 crore).

Tests with The Flying Car have shown that the vehicle can drive, fly and switch from being a plane to a car in just 30 seconds. Pilots say it flies like a really nice little aeroplane. The vehicle is likely to be mass produced in the not-so-near future and will be able travel on ordinary roads in most weather.

The thing I like most about The Flying Car is that it feels imminent. Good news for the hurried man.

Quote hangar: “It is far less fatiguing to fly than it is to drive a car. You don’t have to watch every second for cats, dogs, children, lights, road signs, ladies with baby carriages and citizens who drive out in the middle of the block against the lights … Nobody who has not been up in the sky on a glorious morning can possibly imagine the way a pilot feels in free heaven.” William T Piper, the grand old man of flying, on the highs and highs of flying.