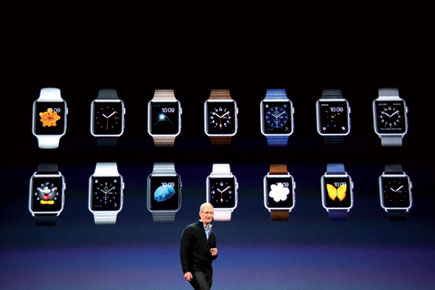 It’s that time of the year again, when the world awaits the release of the latest products from the Apple stable, but this time, instead of its phone, all attention is focused on a watch, the tech firm’s first foray into wearable technology. Apple’s Chief Executive Tim Cook announced the company’s line of smartwatches—Apple Watch—on 9 March. To start selling on 24 April, the range of watches will be priced between $349 and $17,000.

The Watch is Apple’s first original product since the Apple iPad in 2010 (every other product is usually an upgrade of the original). It comes in two sizes, 38 mm and 42 mm, and is available in three models—Sport (with an aluminium case), Standard (stainless steel) and Edition (rose or yellow 18-carat gold).

Some reports state that the Apple Watch could undermine the existence of apps altogether. Having said that, social media networks like Twitter, Facebook, Instagram and the messaging app WeChat have developed software for the Apple Watch. The Watch would take about 2.5 hours to charge from zero to 100 per cent, and would last a user 18 hours—thus providing a day’s worth of use.

The Apple smartwatch will be able to unlock compatible hotel room doors, make hands-free payments and receive phone calls. However, to avail of GPS tracking, receive phone calls and communicate messages, users will need to have an iPhone 5 or a more recent Apple handset. With the built-in accelerometer and heart rate sensor, users can track their all- day activity and workouts. Again, this has to be synced with one’s iPhone. The US, UK, France, Germany, Japan, Australia and Canada are the countries where the Watches will be first sold.