‘When I compete abroad, I go and practise with the Chinese, see how they train and pick up a few tricks’ 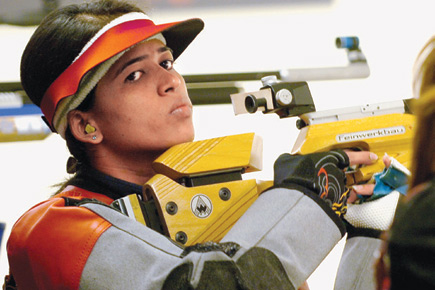 ‘When I compete abroad, I go and practise with the Chinese, see how they train and pick up a few tricks.’


On 8 August 2010, Tejaswini Sawant renounced a quiet life by winning gold at the World Shooting Championship. She also agreed to a life of backward-looking headlines by equalling the world record in the 50m rifle prone event. On cue, she was described as ‘gritty’, which is some kind of rite of passage for any Indian sportsperson these days.

Sawant, who hails from Kolhapur, was born in 1980 and first represented India in 2004. She began shooting at the age of 21, which is relatively late. She recently told The Times of India: “When I compete abroad I just go and practise with the Chinese, see how they train and pick up a few tricks. They take to shooting at a young age. In India, sport takes a secondary place.” Her first tournament happened to be the South Asian Sports Federation Games, held in Islamabad during that heady time of reconciliation. India won gold. Next up, she won five gold, six silver and five bronze at the National Championships, and was selected to represent India at the Commonwealth Games. She won a pair of gold at the games, in the 10m air rifle pairs and singles events. Three years later, in 2009, she won bronze in the 50m rifle three positions in Munich.

Sawant was a sharpshooter at the National Cadet Corps. The Indian Express reported: ‘Tejaswini’s father, ex-naval officer Ravindra Sawant, is a 1971 war veteran and mother Sunita is a State cricket and volleyball player. Music-loving Tejaswini, who was the best shooter of the NCC 6 Maharashtra Girls Battalion at Kamala College in 1999, was coached first by late Jaysinhrao Kusale and later Raju Vadar, who gave her his Feinwerkbau P 70 rifle to shoot.’ She found roadblocks in the form of ‘lack of facilities to train in’ and not enough money for a rifle. It didn’t stop her, though.