Adrian Newy, one of the best designers of racing cars, built a radically new car, the RB5 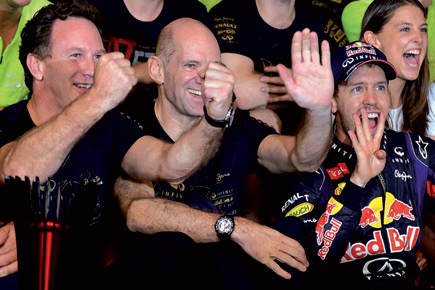 Adrian Newy, one of the best designers of racing cars, built a radically new car, the RB5


Adrian Newy, one of the best designers of racing cars, built a radically new car, the RB5

Vettel’s phenomenal performances also illustrate the rise of and effort put in by the racing team supporting him. The two lynchpins behind Vettel’s rise are Christian Horner, the Team Principal, and Adrian Newey, the car designer. Before Red Bull bought the team, then called Jaguar Racing, from Ford Motor Company in 2004, the team was performing poorly. One of the company’s first moves upon acquiring the team was the hiring of Horner. Horner, a former driver in the junior circuit, was then running a racing team, Arden International, in the FIA F3000 series. His work was noticed by Red Bull owner Dietrich Mateschitz, who offered him the job of running the newly acquired team.

After his appointment, Horner pulled off a coup of sorts when he lured Adrian Newey away from McLaren in 2006. Considered one of the finest racing car designers, Newey had designed championship-winning Formula One cars for Williams F1 and McLaren. In 2007, Australian driver Mark Webber was signed up. The following year, when David Coulthard, one of Red Bull’s drivers, retired, Vettel was brought in as a replacement.

After using a number of Cosworth and Ferrari engines, Newey built a radically new car, the RB5, using a Renault engine. Both Webber and Vettel performed exceptionally well with the car. Vettel landed the team’s first win, winning the Chinese Grand Prix, and Webber backed him up to deliver a first one-two finish. Newey has since come out with newer and better models every year (RB6, RB7, RB8, and RB9).