One World Trade Center, said to be much stronger than the Twin Towers , opened for business on 3 November 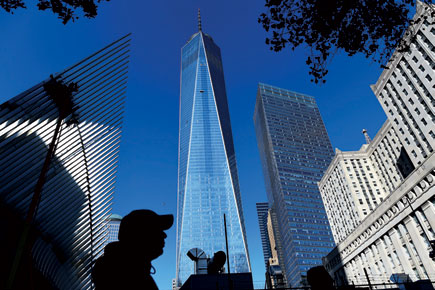 One World Trade Center, said to be much stronger than the Twin Towers , opened for business on 3 November

More than 13 years after the Twin Towers were destroyed in the 9/11 attacks, New York’s World Trade Center has reopened for business. Spread over 16 acres, where the twin skyscrapers once stood, the new complex includes the new One World Trade Center (formerly known as the Freedom Tower), three high-rise buildings, a museum, a memorial and a transportation hub similar to the Grand Central Terminal, a commuters’ stop and train station in New York.

One World Trade Center, said to be much stronger than the Twin Towers thanks to its steel and concrete structure, opened for business on 3 November. Designed by Skidmore, Owings & Merrill, it is the tallest tower in the US and the world’s tallest all-office building with 104 floors, or, the fourth-tallest skyscraper in the world. It includes a three-floor observatory which is due to open this spring. The $3.8 billion structure took eight years to build.

Sixty per cent of the building has been leased. Last Tuesday, Condé Nast, a large publishing company, moved with 175 employees into 25 leased floors. By early 2015, more than 3,000 employees are expected to work at the building.

The destruction of the Twin Towers set off an epoch of wars against terror which the US is still dealing with. That the new building has opened for business is a symbol of resilience for American Inc. The Wall Street Journal reported a security guard there saying: “10 years from now, my son or my daughter will ask me, and I will be like, I was there when the building opened [and] my job was to protect [it].” The construction of Two World Trade Center has been put on hold until new tenants can be found, but is expected to be up by 2020.