He has won 48 titles in his career so far, and 34 of them have been on clay 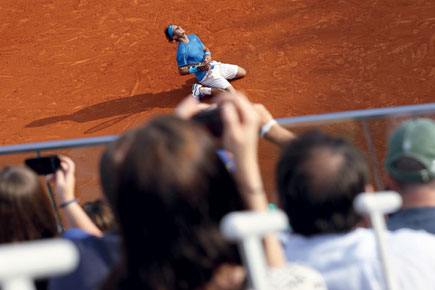 He has won 48 titles in his career so far, and 34 of them have been on clay


Every year, Rafael Nadal’s critics say he’s finally looking vulnerable on clay courts. Then the season starts and his critics look like idiots. Because every year, Nadal just gets better.

This year, Rafa came into the clay season without biting a single tournament trophy since last year’s French Open. He lost a gutwrencher to Novak Djokovic in the Australian Open final and returned empty-handed from the American leg of hard-court events. His perennially gimpy knees were acting up too. It sure looked as if Nadal wouldn’t be as intimidating, even on his favourite surface.

Ha! Rafa won Monte Carlo without losing a set. In the final, he faced Djokovic, who had beaten him seven times in a row. Rafa smacked him 6-3, 6-1. It was Rafa’s eighth consecutive Monte Carlo title, a record.

A week later, Rafa won the Barcelona Open for a seventh time, again without dropping a set. It made Rafa the only player to hold two titles seven times or more.
When it comes to the French Open, the world’s most prestigious clay tournament and one of the four grand slams, Rafa’s won six times. He’s lost only one match, to Robin Soderling in 2009. He has won 48 titles in his career so far, and 34 of them have been on clay. In all, he’s played 259 matches on dirt, and won 241 of them. The extent and durability of his supremacy on the surface make it an extraordinary feat across sports.

Till a few years ago, some rated Bjorn Borg as the greatest clay-courter of all time. Like Rafa, the legendary Swede won the French title six times. Like Rafa, Borg had the aura of invincibility around him. Just the idea of winning a few games against him, let alone sets, would overwhelm opponents. But Rafa’s smashed his way to another level now.