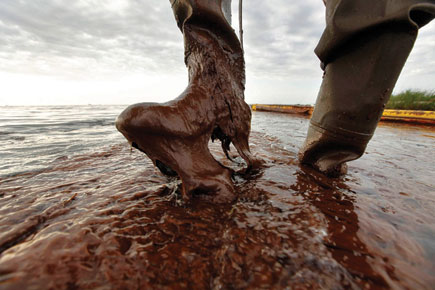 
Oil spills have been recorded since as ear­ly as 1907. Recently, the cargo vessel MV Rak Carrier sank off the Mumbai coast near Juhu beach and has been leaking oil since 6 August. The ship was reportedly carrying 60,000 tonnes of coal, 290 tonnes of fuel oil and 50 tonnes of diesel, apart from its 30-member crew, who were rescued. It was a Panama ves­sel on its way to Dahej port in Gujarat.

Oil spills seem to be an annual phenomenon. Just last August, Mumbai witnessed an oil spill because of the collision of merchant ships MSC Chitra and MV Khalijia. It resulted in tar balls forming on Alibaug, Kihim and Gorai beaches.

An oil spill is usually caused when a ship sinks or two or more ships col­lide, or a drilling rig leaks under the surface. Spills affect marine life and are huge environmental hazards for humans.

Last year’s Gulf of Mexico oil spill, which started on 20 April when the Transocean Deepwater Horizon Rig exploded while British Petroleum was drilling for oil, was the biggest in America’s history. About 19.24 million gal­lons of oil devastated marine, wildlife and hu­man habitats, causing outrage.

Marine life is affected when their bodies get coated with a thick layer of oil. As oil floats on the surface of water, it affects the oxygen sup­ply to animals and plants under it, resulting in further damage. Fish that are consumed by humans are contaminated by the oil. Hence, an oil spill has far-reaching effects, and people are generally advised to eschew sea food on such occasions.

As the Mumbai spill continues, environmen­talists say that mangroves along the coast could be in danger. As there is no other barri­er between homes and the sea here, this may lead to the massive flooding of areas situated right next to these mangroves.