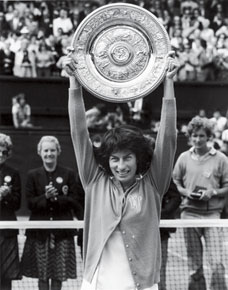 
Andy Murray created history at Wimbledon on Sunday, becoming the first British male to win the title since Fred Perry in 1936. It was a heroic performance by Murray. He played under enormous pressure of expectation and overcame tough opponents, including world No 1 Novak Djokovic, in his last three rounds. Murray will be adequately compensated for his effort. His prize money alone is £1.6 million. His endorsements are projected to shoot skywards. Murray could make £100 million in the next five years.

Britons have lauded Murray’s victory, but many are baffled that Britain has all but forgotten the four English women who won the women’s singles title in the intervening years between Perry’s and Murray’s wins. Dorothy Round Little won her second women’s singles title in 1937. The partially deaf Angela Mortimer won in 1961. Ann Haydon-Jones upset Billie Jean King to win in 1969. And Virginia Wade took the crown in 1977. In addition, there have been British winners in the juniors and paired events. But even excluding those, Britain’s wait for a singles champion was 36 years, not 77 as is generally broadcast. Only the wait for a male singles champion has been 77 years.

While no one is taking away from the scale of Murray’s achievement, people feel that the common ‘77-year-wait’ theme in the UK media coverage of the win was erroneous and unfair. The Times front page read: ‘Murray ends 77-year wait for British win’. The Telegraph said: ‘After 77 years, the wait is over’. The Daily Mail reported: ‘Andy Murray ends 77 years of waiting for a British champion’. Later, feminist writer Chloe Angyal famously tweeted, ‘Murray is indeed the first Brit to win Wimbledon in 77 years unless you think women are people’.