In 1935, Charles Richter and Beno Gutenberg developed the Richter scale. 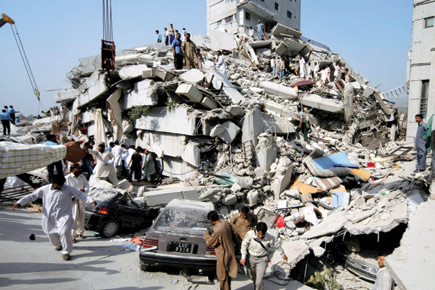 In 1935, Charles Richter and Beno Gutenberg developed the Richter scale.


The theoretical air distance from New Delhi to Port-Au-Prince, the capital of Haiti, is 13,849 km or 8,605 miles. Haiti is an island in the Caribbean. Minor earthquakes are common in this part of the world, but there has not been a major one in Haiti in 16 years, until now.

The earthquake on 12 January was a magnitude 7.0 Mw shocker with the epicentre near Léogane, approximately 25 km west of Port-au-Prince. The United States Geological Survey recorded at least 33 aftershocks, 14 of them between magnitudes 5.0 and 5.9. Haitian Interior Minister Paul Antoine Bien-Aime believes up to 200,000 have died.

An earthquake (also known as a tremor or temblor) is the result of a sudden release of energy in the Earth’s crust that creates seismic waves. They are mostly caused by a rupture of geological faults, but also because of volcanic activity, landslides, mine blasts and nuclear experiments. The seismic measure of a tremor is done using a seismograph. It is known as the moment magnitude (or the related and mostly obsolete Richter magnitude) of an earthquake. Tremors with magnitude 3 or lower are mostly imperceptible, with magnitude 7 and above expected to cause serious damage.

In 1935, Charles Richter and Beno Gutenberg developed the local magnitude (ML) scale (popularly known as the Richter scale) with the goal of quantifying medium-sized earthquakes (between magnitude 3.0 and 7.0) in southern California. It was based on the ground motion measured by a seismograph placed at a distance of 100 km from the quake. For obvious reasons, this method is limited and unreliable when the distance is greater.

In an attempt to address this shortcoming without moving too far away from existing methods, the moment magnitude (Mw) scale was introduced in 1979 by Caltech seismologists Thomas C Hanks and Hiroo Kanamori. A magnitude 5.0 earthquake will be about 5.0 on both scales, but unlike other scales, the moment magnitude method does not have an upper limit. However, the Mw scale is not effective at measuring smaller tremors, often a sign of things of greater magnitude to come.