Consume the luscious object of desire with both hands. If possible, slowly 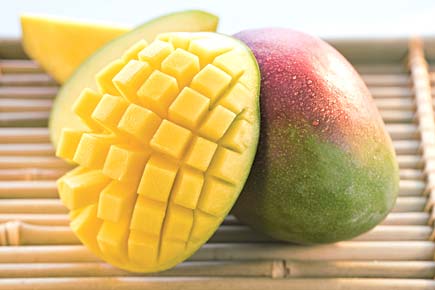 Consume the luscious object of desire with both hands. If possible, slowly


“The choicest fruit of Hindustan,” said Amir Khusro in his Persian verse extolling the many virtues of the mango. That it belongs to the same family, Anacardiaceae, as poison ivy is merely an interesting aside.

The word mango traces its roots to the Tamil word mangai. It moved into Portuguese in the early 16th century as manga, from where it was anglicised to mango. The ‘o’ in English is of unclear origin. Also unknown: How the term mangai came to be used by members of my family to mean ‘south Indian’. (Don’t ask, we’re like that only.)

Kent, Tommy Atkins, Haden, Ataulfo and Keitt are considered the most popular varieties of mango in the Western world. It’s best not to tom-tom this in the company of militant Indian mango-lovers, for whom the venerable alphonso—known as ‘aphoos’ or ‘haphoos’ along the Konkan coast and Maharashtra—rules the roost. Observers will have spotted a touch of Portuguese in the name. It can be traced back to Afonso de Albuquerque, a 16th century Portuguese explorer and military strategist, who is credited with introducing this variety to Goa. RIP, kind sir.

Moving on from mango culture to pop culture, mango-loving fans of Seinfeld will be gratified to note that the 65th episode of the sitcom was titled The Mango and was about George discovering that mangoes cure his impotence. India, one must add, is a nation in which the fruit is considered an aphrodisiac. It’s worth noting that the largest consumer of mangoes is also the world’s second-most populous country.

Speaking of ‘superfruit’, this is a marketing term given to us by the food and beverage industry. It refers to a fruit which—ad copy alert—combines exceptional nutrient richness and antioxidant quality with appealing taste to stimulate and retain consumer loyalty. Stop. Some other ‘superfruits’ are guarana, grape and pomegranate. They, too, are perceived to be aphrodisiacs. (Don’t ask, ‘superfruits’ are like that only.)

The polite way to eat a mango is by cutting it ‘hedgehog’ style and deftly slicing the upturned cubes into a dessert bowl, which you then savour using a fork. The preferred way is to consume the luscious object of desire with both hands. If possible, slowly.