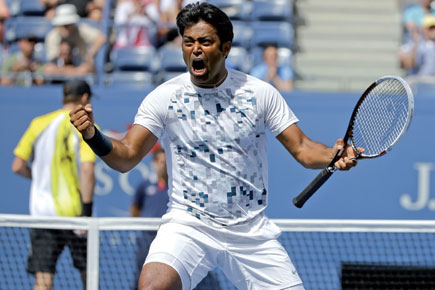 
Leander Paes became the oldest male player to win a Grand Slam title on Sunday. The 40-year-old partnered Radek Stepanek of the Czech Republic to win the US Open men’s doubles competition, defeating Alexander Peya (Austria) and Bruno Soares (Brazil) in the final on Sunday. They won $460,000 in prize money.

It was a creditable win for Paes-Stepanek, considering Paes’ age and the fact that Stepanek was coming back from neck surgery. Besides, the duo defeated the formidable top-seeded combination of the Bryan twins, Mike and Bob, in a fast-paced semi-final. Fans rated the match as among the most exciting at this year’s tournament.

The win over the Bryan brothers has generated fresh interest in the Paes-Stepanek combo in the US. In a press conference, Paes narrated some of his interesting experiences in almost 20 years of playing the US Open. He was in the Twin Towers the evening of 10 September 2001. He says he still has the receipt of the purchase he made in a store there that evening.

Stepanek also contributed to their appeal. He is known for his popularity with women and has dated Martina Hingis, Petra Kvitova and was married to Nicole Vaidisova. He is also particular about his T-shirts, which feature vivid designs he suggests to the company Alea. This time, there was an image of Manhattan. “It’s our little tribute to Gotham and the people here and what they stand for,” Paes said.