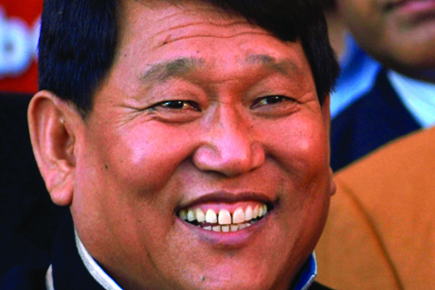 
The Chief Minister of Arunachal Pradesh, Dorjee Khandu, died in a helicopter crash in Luguthung, close to India’s border with China. He had been missing for five days after his Pawan Hans went quiet shortly after taking off from Tawang enroute to Itanagar. There were four other people on board.

But who was Khandu, and what was his importance to the state? For one, he was the state’s fifth Chief Minister, and leader of the Indian National Congress in Arunachal Pradesh. He took on the role in April 2007, and was re-elected in October 2009. Perhaps it was political talk, but earlier this year at a Lossar celebration, Khandu said that while the state had to transform itself, youngsters were losing touch with the state’s traditions and culture. The Times of India reported: ‘Khandu added that the elders should guide the younger generations so that they were well aware of the rites and rituals. He batted for documentation of the customary laws and also stressed on showcasing the unique cultural identity of the state to the world.’ He often asked for the state to be more hospitable to tourists.

Among other problems, Khandu had the National Socialist Council of Nagaland to contend with. Earlier this year, the NSCN directed 12 elected representatives in Tirap and Changland to withdraw support for Khandu’s government. He also sought funds for developing border areas to counter any Chinese threat. ToI reported him as saying: “Our state is strategically located because of the irrational claims of China. Arunachal shares a 1,200-km hilly and snow-clad border with China, an over 540-km treacherous, porous and infiltration-prone frontier with Myanmar and an almost 160-km boundary with Bhutan. Keeping all this in mind, a special financial package for Arunachal is an imperative.”