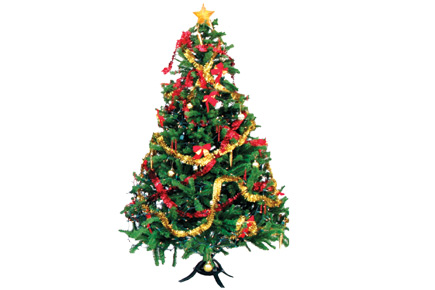 Isaac Newton proposed that the date was selected to correspond with winter solstice.


It’s that time of the year again when the world prepares to ring down the past and drink in the New Year. It all starts the night before 25 December, which we now know as Christmas Day, Jesus’ birthday. That said, one isn’t entirely certain if 25 December is the chosen date because it is the birthday of the ‘Son of God’.

Let’s start our investigation with the word ‘Christmas’. Where did it originate from? It is a compound word that means ‘Christ’s Mass’. And the ‘X’ in ‘X’mas’? From the Greek letter ‘X’ (pronounced ‘chi’) and/or the similar Roman cross ‘X’, used as an abbreviation for Christ since the mid-16th century.

The Christmas tree is widely considered a Christian co-option of a pagan tradition surrounding the Winter Solstice, which included the use of evergreen boughs, and an adaptation of ‘tree worship’. Other forms of plant life associated with Christmas include the poinsettia, a plant from Mexico, holly, red amaryllis, Christmas cactus and the mistletoe.

A number of figures, both Christian and mythical in origin, have been associated with Christmas and the giving of gifts. Santa Claus is a name we’ve all heard of. But did you know he’s also Père Noël, Weihnachtsmann, Sinterklass, Kris Kringle, Babbo Natale and Joulupukki, to name a few, to people in different parts of the world?

In the early 18th century, Isaac Newton proposed that the date was selected to correspond with winter solstice, which in ancient times was marked on 25 December. One possible explanation why this date is so important is that the winter solstice being the shortest day in the northern hemisphere, from then on the sun keeps getting stronger, a useful phenomenon to tie a god in with.

In 1743, the German Protestant Paul Ernst Jablonski argued that Christmas (the date) was chosen to correspond with the Roman solar holiday ‘Dies Natalis Solis Invicti’ (birthday of the invincible sun) and an example of ‘paganism’ infiltrating Christianity.

But the appearance of the Roman solar holiday post-dates that of a lesser known cult in Persia, the Mithras, whose ways gained currency in parts of Europe and Rome during the 2nd and 1st centuries before Christ. They celebrated ‘Sol Invictus’ (the invincible sun) on ‘Christmas Day’ by sacrificing a bull.