If two trains are too close to each other, the network activates the brakes. 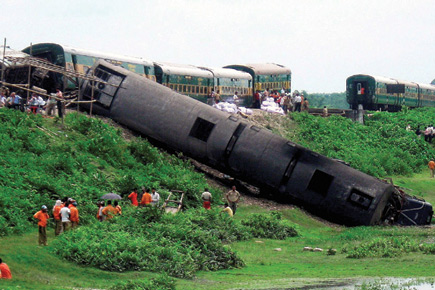 If two trains are too close to each other, the network activates the brakes.


In December 2009, Mamata Banerjee explained in Parliament, “Whenever there is an accident, we talk about anti-collision devices and other safety measures. We have decided this time that we have to go ahead in terms of short-term vision and long-term vision.” She added that even a single death would be tragic. So when a moving train rammed into a stationary one at Santhia in West Bengal, killing more than 60, among the questions asked was one about anti-collision devices.

A device of this kind is already in use along the Konkan rail line and on the North East Frontier Railway. Called the Raksha Kavach, it was developed in 2002 by Kernex Microsystems (India) Ltd. Engines are mounted with an ultra-high frequency data transmitter and a GPS receiver. The UHF transmitter enables radio communication between two engines. The GPS tells them where they are in relation to other trains. If two trains are deemed too close to each other, the network activates the brakes and slows down either or both trains. The network comprises devices installed on the engine, the guard van, the station and at each level crossing gate.

In December, Banerjee said she needed

Rs 13,000 crore to install these devices along the 63,000 km long rail network. But rail officials say the system needs improvements first. The Times of India reported an official saying, “At times, it fails to detect trains on the same track or confuses up-down movement on parallel lines.”

Officials say they will consider importing a system that can stand up to the rigours of Indian conditions. There are many to choose from, including train stops (it acts as a tripper if a train overshoots a red signal), inductive systems (data is passed magnetically between the train and the track) and cab signalling (Raksha Kavach resembles this).