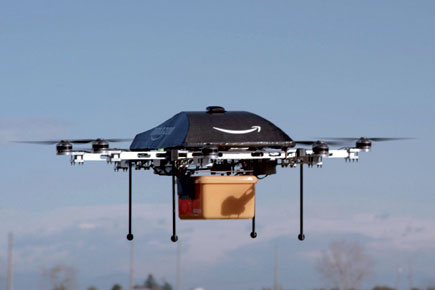 Drones are not only for spying on enemy territory, they might also deliver your new iPhone. Amazon.com is working on a model by which drones will deliver packages to customers within 30 minutes.

Titled ‘Prime Air’, the drone is still at research and development stage, and the company says it will still take a few years for it to be operational, depending on rules and regulations created by the Federal Aviation Administration. Amazon CEO Jeff Bezos has said that since these drones can carry packages weighing up to 2.2 kg, there is no reason they can’t be used as couriers. They will be tested to have a range of over 16 km.

Bezos made the announcement on the American TV show 60 Minutes and said Amazon should have the project up in the air and flying in four or five years. These drones will have GPS coordinates fed in, and won’t even need a human being controlling them from an operating room. But concerns are already being raised. Ray Kurzweil, a technology entrepreneur and futurist, says that though such drones will make it easier to deliver packages and can help with monitoring traffic, they will raise privacy concerns as well. Another problem: how do you keep a delivery drone from hitting anything, damaging itself or hurting someone else? An official statement released by Amazon answers: ‘The FAA is actively working on rules and an approach for unmanned aerial vehicles that will prioritize public safety.’

Drone expert Missy Cummings told CNN that she felt that the drones would need to fly at an altitude of 300 feet to avoid being shot down by mischief-makers or thieves. She also said that there would be “drop spots” organised, from where people can pick up packages.