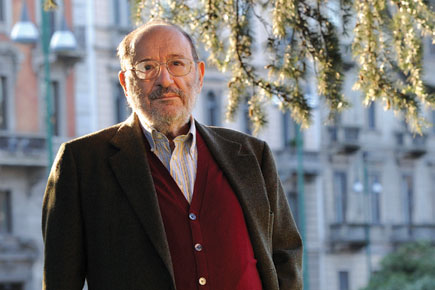 ‘Beyond custodians of historical memory, multimedia tools can be devices to strengthen our ability to remember’: reads a tweet dated 21 November 2015. Written in Italian, that was the last day Umberto Eco sent a message out to the world. He would pass away of cancer on 19 February at age 84 in his home in Milan.

He might have begun his career as a scholar of medieval studies and semiotics but the present and the future always absorbed him. If his present tweet moves away from the typical discourse that technology makes us amnesiac, back in 1994 he used his skill as a semiotician to read into computers and place them in a religious context. He said, “I am firmly of the opinion that the Macintosh is Catholic and that DOS is Protestant.”

Over the last 40 years, few intellectuals have sent out as many and as diverse messages as this Italian author, philosopher and critic. While The Name of the Rose (1980) was his biggest claim to fame, selling more than 10 million copies, he is also the author of eight other novels and more than 20 non-fiction books on various topics from philosophy to morality to aesthetics. People are often surprised to learn that he has written three children’s books as well, two of which have been translated into English.

With 50,000 books in his private collection (30,000 at his apartment and 20,000 in his manor), it is little surprise that Eco had the reputation of being ‘the most erudite man on earth’. But unlike most intellectuals, who carry their knowledge as a shield against lay folk, Eco used it to embrace the world and those in it. Tribute after tribute to him makes mention not only of his eclecticism but also his geniality. His appearance of a friendly nonno (grandfather), complete with prickly moustache and twinkly eyes, and his reputation for wisecracking through conversations only endeared him further to the crowd.

While it is easy to assume that a professor fluent in five languages—plus Latin—might be a stuffed shirt, Eco remained affable to all and interested in everything. A big TV watcher, he was a fan of CSI, Miami Vice and even ER. He could discuss James Bond (he has even published ‘a structural analysis of the archetypal Ian Fleming plot’), Aristotle and the Renaissance with the same élan and fervour.

While his critics belittled his interest in the ‘popular’, it helped ensure his cult status amongst readers, and also kept him contemporary and relevant.

His passion for varied themes resulted in the blockbuster book The Name of the Rose, which combines theology and philosophy with the blood and mystery of a detective novel. In an interview to The Paris Review in 2008, he said, “The truth is, I have written countless essays on semiotics, but I think I expressed my ideas better in Foucault’s Pendulum than in my essays. An idea you have might not be original—Aristotle will always have thought of it before you. But by creating a novel out of that idea, you can make it original.’ Eco will be remembered for using the novel to best explore life’s big questions.

His funeral in Milan was testimony to his popular appeal. Hundreds thronged to Sforza Castle to catch a glimpse of his flower-decked coffin.

Pape Satàn Aleppe: Chronicles of a Liquid Society, a collection of his short stories published in a weekly Italian magazine, which was to appear in May, will hit stands this weekend.