The Last of the Gramophone Men 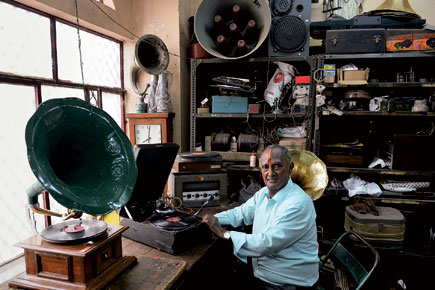 DS Srinivasa Murthy is 75 years old and his age partly explains his relationship with gramophones. The music player is almost extinct, but if you chance upon one of the rare remaining pieces, then Murthy is among the few in this country who can get it running. He does this work in a tiny room near Bengaluru’s busy Avenue Road. It was in this very room that his father Seetharam Shetty set up a gramophone manufacturing unit way back in 1924 under the name Seetha Phone Company. “The first piece was sold for Rs 37! We stopped making them in bulk sometime in 1974-75, as demand fell,’’ Murthy says.

In his workshop, I find him winding a brass gramophone as strains of an old Tamil song fills the air. “The whole thing is mechanical, like the good old Swiss watch, and made to perfection. It works on spring power and does not need either a power connection or a battery to run it,’’ he says.

To listen to a vinyl record on a gramophone, one has to wind it at least 20 times. Murthy reels out the names of different parts of the contraption that he makes by hand. “It’s a long and painstaking process. I have not trained anybody, as no one is interested. These parts— whether it’s the sound box, bracket or tone arm—have to be made with precision. They take effort and time, as it involves brass and metals. Precision is very important since a new part made by me has to blend in seamlessly with an old gramophone.’’

Murthy is often sought out by collectors to restore a few pieces every month. Some of his clients are antique lovers who are difficult to satisfy. “It’s okay [for them] if it’s lying in a dusty corner or packed away in a trunk. But the moment they get it repaired and it starts working, most of them find some fault or the other with it,’’ Murthy says.