The Cross Ticks All the boxes 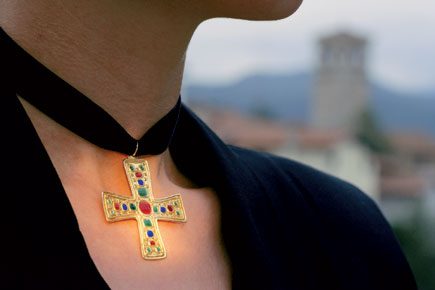 In an unlikely marriage between fashion and religion, a holy symbol becomes a style statement

It’s official—to be truly trendy today, you need a Cross to bear. The Christian Cross has become a big fashion trend all over the world. Major designers like Versace and Dolce & Gabbana may have paid their respects to the symbol over the years, but it really comes down to the masses when a high street brand like Forever 21 pays homage to it with accessories and clothes galore. Of late, the accessories stand at Forever 21 in Mumbai has been full of Cross earrings and neck pieces.

You don’t need to be religious to wear them. As designer Tanya Sharma, who runs a label called GaGa) says, the Cross is actually a sign of rebellion. “You are making sure you wear it even though you don’t believe in that religion. Isn’t that rebellion?” She adds that this is also about fashion coming a full circle and the Cross just being revived as part of a cycle. “Madonna was a Cross lover, remember? It’s a statement accessory, and that’s why it works. It’s the 80s all over again.”

The big trend in Cross fashion has to be the sideways Cross necklace. Jessica Biel, Jennifer Lopez and Kourtney Kardashian all have been sporting the accessory. Some celebrities like Lady Gaga and Rihanna have also been seen wearing the inverted Cross, which has ignited some conversation. It has been suggested that wearing an inverted Cross means you are reaching out to Satanists, who use the inverted Cross to show their anti-Christian beliefs.

Recently, the Archbishop of Canterbury, Rev Justin Welby, was quoted as saying in his first Lent book: ‘For those early Christians, it was a badge of shame. Today, it is more commonly seen as a symbol of beauty to hang around your neck. As a friend of mine used to say, you might as well hang a tiny golden gallows or an electric chair around your neck.’ But if you, like most of us, are a slave to fashion, , go ahead and wear that Cross around your neck. Or a lace Cross on your sweatshirt.