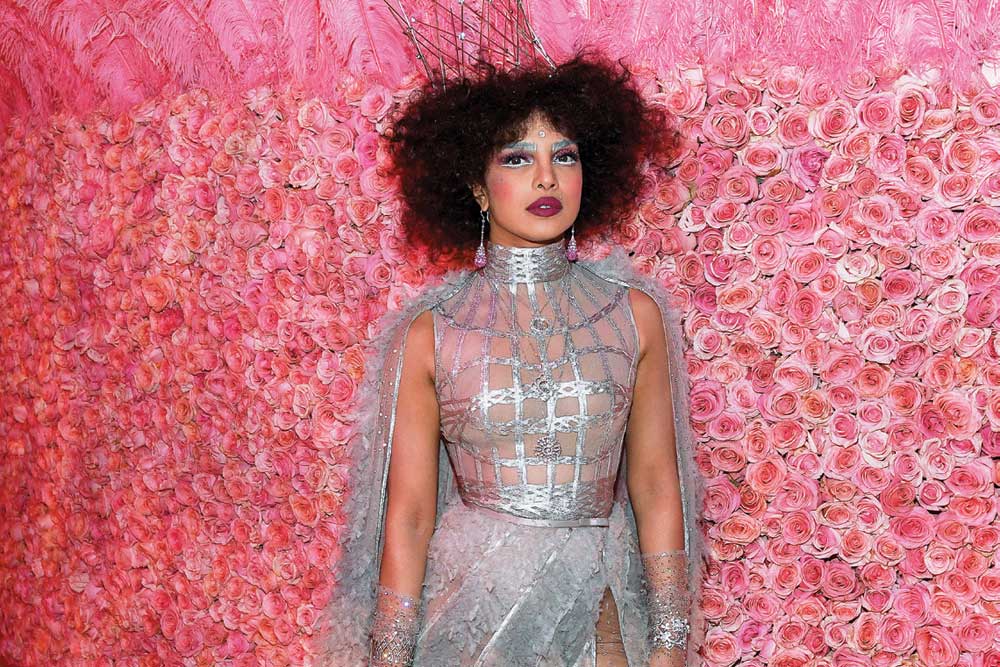 PRIYANKA CHOPRA APPEARED quite dramatically at the recent Met Gala. Elle described the look as ‘Glinda the Good Witch in a silver Dior dress’, but people on Twitter had far more humourous and uncharitable descriptions to offer. What Chopra had on was a silver gown, along with something of a caged bodice, a cape of feathers flowing behind her, and a strange silver crown that sat atop a big mop of curly hair. There was also a bindi somewhere amidst all that makeup. She wore it, according to reports, because she “always looks for something that defines who I am and that’s an amalgamation of the East and the West.” Her makeup artist Pati Dubroff explained the entire look as, ‘when the spirit of Louis XIV meets Dior Runway with a twist of Bowie attitude’.

The reactions to the appearance itself were mixed. Some international media outlets said they didn’t care about it. Others like Time magazine said, ‘The overall effect was of an otherworldly fairy godmother figure.’ Every year, Hollywood’s A-listers and wannabes appear in overwrought garments for the Metropolitan Museum of Art’s Met Gala. And this year’s theme ‘Camp’ resulted in far more over-the-top looks than hers, from people dressed in chandeliers to a man with what looked like his own decapitated head.

Back home though, she launched an avalanche of Twitter jokes and memes. Local media outlets covered it feverishly. At some point, her mother was reached. “Bahut sunder lag rahi thi, bahut special lag rahi thi [She was looking very beautiful and special],” she responded.

When was the last time, apart from her wedding, when she created such a splash? No, it wasn’t in a movie or show. It was at the same Met Gala two years ago, when she appeared in a vast trench coat.

Chopra finds herself at a crossroads in her career. You hear more of her than actually see her in a film. She gives the impression of being a mega star, many media outlets in India routinely refer to her as a ‘global icon’. But when you look up what she’s doing as an actor, there is very little to offer.

Bollywood stars have aspired to a career in Hollywood for so long that they have created what is probably their own term for such an attempt – the crossover star. Yet very few, bar Chopra, appeared to have truly managed to cross over. But nearly four years since her first episode of Quantico released, it is a good time as any to ask, has Chopra managed to crack into Hollywood?

Probably not. Or at least not so far.

Her TV show Quantico wasn’t particularly great. A big splash with a supporting role in a mainstream Hollywood film, Baywatch, fared poorly. There were two more films, with smaller roles, which too sank without a trace.

To be a star one has to be actively in front of people’s imaginations, to appear busy even if one isn’t really. Stardom is genuine popularity. But a lot of it is also theatre. Like the spectacle of the Met Gala. So Chopra moves from the Met Gala to the next red carpet event, from one internet meme to another.

Chopra can still become a big Hollywood celebrity, thanks to the current posturing about the need for diversity and inclusivity. And if not that, there is always the commercial pull of hiring actors from different countries to capture the audiences in those countries.

But until that comes to pass, the next Met Gala will have to do.