Notre-Dame: Cathedral of the World 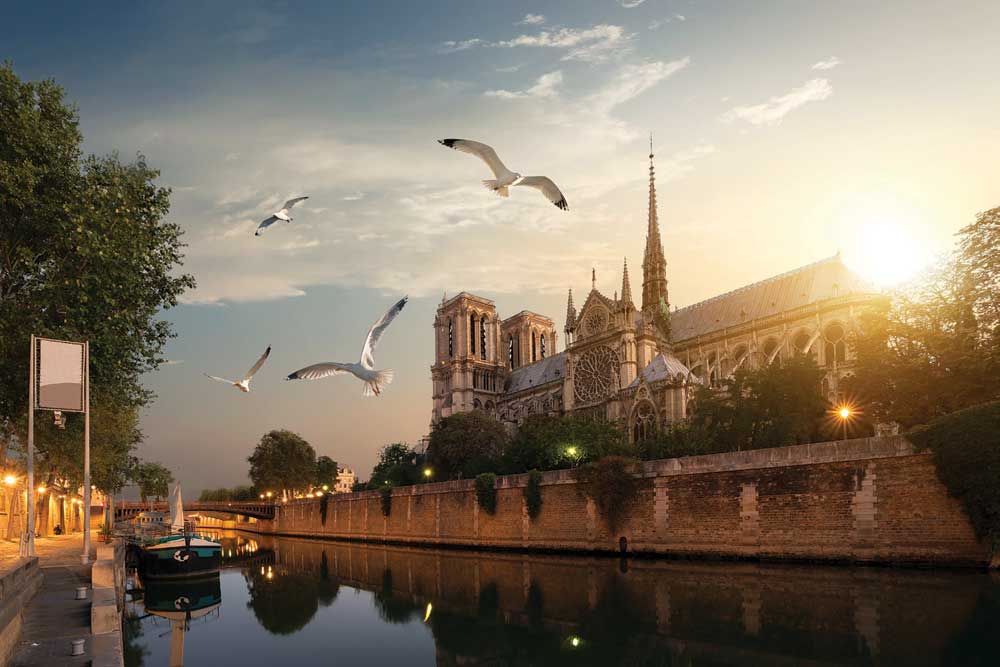 THERE IS A moment in Richard Linklater’s film Before Sunrise (1995) when the Notre-Dame comes into the view of two former lovers—Jesse (played by Ethan Hawke) and Celine (Julie Delpy)—taking a boat ride along the Seine. Jesse tells her a story, of how Germans during World War II placed explosives inside the cathedral, when retreating from Paris. They left an unnamed soldier behind to detonate it. When the Allied troops came in, the explosives lay there with the switch unturned. The soldier couldn’t bring himself to do it. Celine, the more practical of the two, replies, ‘That’s a great story. But you have to think that Notre-Dame will be gone one day.’

The story may not be entirely true. A Slate article, quoting the book Disobeying Hitler: German Resistance After Valkyrie, says it was a German General (Dietrich von Choltitz) who was asked to squash an uprising in a Parisian prefecture, which, had he acted upon the command, would have destroyed the Notre-Dame. He did not pull the trigger. ‘[I]t remains unclear whether von Choltitz defied Hitler out of heroic love for Paris, was manipulated by [Swedish Consul General] Nordling, or merely felt compelled to surrender out of desperation,’ the article states.

On April 15th, parts of the Notre-Dame did go up in flames. The extent of the damage is still unknown, but the fire destroyed much of the gothic cathedral’s wood-timbered roof and spire. Several relics, paintings and works of art were rescued, including the gilded crown of thorns, which some believe was worn by Jesus on the cross, carried out of the basilica by a human chain. The cathedral will certainly be restored (the French government promises), but the sight of flames bringing down the spire moved the world in a manner far exceeding its religious significance.

If Paris is the most beautiful city, the Notre- Dame stands at the crest of that aesthetic, the centre of the centre, Point Zero, from where all distance from the capital is measured in France. For the French, it represents something immortal, ever- present and unchanging, like a mountain. Built over almost two centuries, the Notre-Dame is, as President Emmanuel Macron said after the fire was brought under control, “where [the French] lived all [their] great moments”. Soldiers prayed here before leaving for the Crusades; Napoleon Bonaparte was crowned here; it survived the French Revolution, two World Wars and the Nazi occupation. It is where men bend their knees to profess love and thousands of selfie sticks jostle every day.

During the French Revolution in the 1790s, mobs and revolutionaries are believed to have looted the interior, beheading statues of biblical figures they thought were French royals and declaring the building a ‘Temple of Reason’.

A few years ago, I remember pushing through a crowd of tourists on a hot summer day to join an even larger throng into the cathedral’s dark immensity. My wallet had almost just been pinched and my cousin had her lunch stolen (the area, given the crowds, is unsurprisingly popular among pickpockets). I remember being awed, not because of the religiosity or historical significance, but purely at a sensual level. Despite the click of cameras and intrusion of selfie sticks, it was dark, gloomy and immense. The air was cold and tall windows rode to the sides of us. You got a distinct feeling of being in the belly of something magnificently ancient.

Monuments are time itself, predating and outlasting those who built them. But they also wax and wane, subject to the whims of time. Two centuries ago the Notre-Dame lay dilapidated when a work of literature again lifted it back to the consciousness of first, France and then, the world. The book that did it was The Hunchback of Notre-Dame, in which the cathedral itself is a main character. As a Washington Post article noted, ‘But beyond the star-crossed love, Notre Dame is the star of the show. Hugo wrote two chapters just describing it. And he notably set his novel in the 1400s, Notre Dame’s heyday. Hugo wrote: ‘[I]t is difficult not to sigh, not to wax indignant, before the numberless degradations and mutilations which time and men have both caused the venerable monument to suffer.’’

Bouncing back from a fire with the whole world rooting for it will take far less.