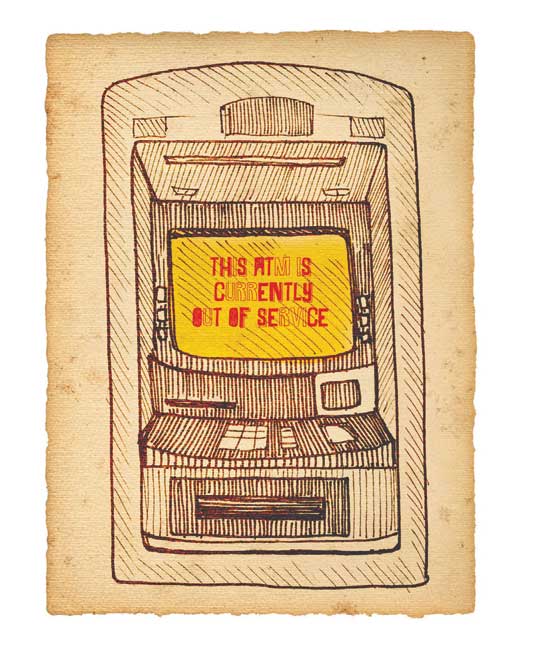 IN THE PREVAILING outrage against the demonetisation drive, we have identified our chief complaints—the cash crunch in the market, the wasted man hours spent in long queues, and the limited access to our own money. Underlying all this is our relationship with the Automated Teller Machine (ATM). In the last two decades or so, the ATM card and kiosk on the street corner have come to form an intrinsic part of our lives. Personal finance is a sensitive domain and Indians are suspicious by nature. When cash machines were first introduced, and sometimes even now, many used to worry if the machines would eat up their cards or glean and pass on account details. Yet we got over those initial suspicions. We began to trust it and even prefer it to its human counterpart, sometimes even mistakenly believing its acronym stood for ‘Any Time Money’.

The ATM brought personal banking out of the bank and closer to us. In a society where time is increasingly precious and money needs to be constantly available, all we needed was to walk up to an ATM to withdraw or deposit cash, or even perform slightly more complex operations. But for the last one month, as we stand in serpentine queues only to be told that it only dispenses high-denomination Rs 2,000 notes, or, worse still, no cash at all, our trust in the machine, hardwired now into our brains, is eroding.

The first ATM in India came up in September 1987 on the premises of the HSBC Andheri East branch in Mumbai. It only accepted cheques and dispensed cash up to Rs 3,000 per day. Before its introduction, the modern electronic ATM—first set up by Barclays Bank in its Enfield Town branch in London in 1967—had revolutionised banking elsewhere. These were mostly in advanced and homogenous Western countries. The question then was could such a machine succeed in a diverse and unbanked country like India where access to technology is seen as an elitist privilege?

In the 1990s, the Indian ATM industry grew slowly. There were only an estimated 1,521 ATMs in the country in 1999. But with the entry and growth of private banks and an aggressive push to expand customer bases, ATMs began to mushroom all across the urban and small town landscape. In the privacy of a small kiosk with a security guard outside, and a multitude of language options available, we began to get over our fears and start banking with a machine. The ATM managed to transcend linguistic and social barriers as well. It is still not unusual, for instance, to see two or more people bunched over a single machine trying to figure out how it works. Sometimes several people share a single card. In the early days, parents opened bank accounts in distant towns that offered an ATM service, so that their children could use these cards when they moved to cities to pursue their education. Even now it is common for a migrant labourer with a bank account to send an ATM card to his family in a distant town. By 2005, the number of ATMs in the country shot up to 17,000. It was 180,000 lakh by 2015. According to RBI’s August 2016 statistics, there are now close to 230,000 ATMs and over 710 million debit cards in India. Before ATMs, people stocked cash at home to avoid bank visits where deposits or withdrawals could take hours. The kiosks changed that. India is projected to have over half a million ATMs by 2021, even if the trust between man and machine is at a low point right now.